N'Golo Kante made his return from injury as Chelsea ended their pre-season campaign with a 2-2 draw at Borussia Monchengladbach.

The France international had not featured in pre-season due to a knee injury but came on for the final 18 minutes in Germany to hand Frank Lampard a huge boost ahead of his side's Premier League opener against Manchester United next Sunday, live on Sky Sports.

Kante helped the Blues to a draw at Monchengladbach, who finished fifth in the Bundesliga last season, as two second-half penalties cancelled out strikes from Alassane Plea (13) and Jonas Hofmann (39) in the opening 45 minutes.

Tammy Abraham scored the first in the 59th minute after Mateo Kovacic was tripped in the penalty area.

Chelsea had a golden opportunity to level the scores from open play when Ross Barkley latched onto a loose back pass but the England midfielder struck wide from 12 yards. 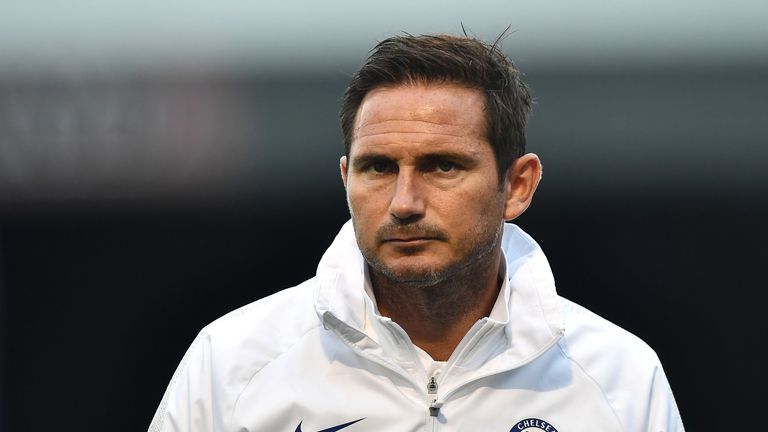 Frank Lampard insists his side still needs to improve after their 2-2 draw with Borussia Monchengladbach, ahead of their 2019/20 opening Premier League season clash with Manchester United

However, there was still time for an equaliser and it came four minutes from time after former Tottenham youngster Keanan Bennetts brought down Mason Mount in the penalty area.

It handed Barkley another chance and he made no mistake, rescuing a share of the spoils for Lampard's side.

Chelsea manager Frank Lampard: "That was always the plan. He's working a little bit now and it was just to give him the feeling of match time as he hasn't been able to do that yet as it's an awkward injury. I just wanted him to feel it and us to see it as you cannot replicate it unless you do it.

"It was a good opportunity to do that for him and we'll work hard on getting him fit. Who knows if he'll be ready for next week or not, but we'll work hard for that. We also have to be a bit careful as he's played so many games over the past three seasons and we don't want to rush him back if it's going to be a negative. We'll do our best to get him back."

Chelsea open their Premier League campaign with a trip to Old Trafford on August 11 to face Manchester United (kick-off 4.30pm).

You can watch all the action live on Super Sunday on Sky Sports Premier League from 4pm.

Our final pre-season game ends in a draw. Another good test for the Blues, with just over a week to go until our Premier League campaign begins... #BMGCHE pic.twitter.com/DnMfIiQslc