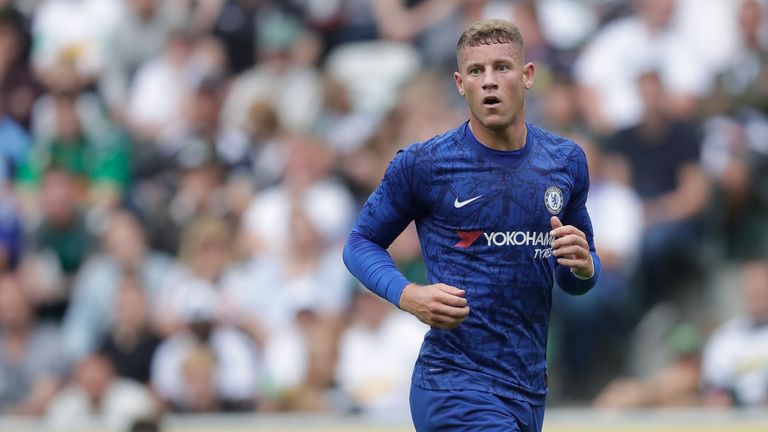 Ross Barkley insists working with Frank Lampard on the training field is benefiting Chelsea's midfielders in front of goal.

Barkley has been a regular in the Chelsea side since Lampard took charge in the summer, making nine appearances already this season.

After missing a penalty in the Champions League defeat to Valencia, the 25-year-old scored his first goal of the season in the 7-1 Carabao Cup win against Grimsby at Stamford Bridge on Wednesday.

Asked how Lampard has helped develop players on the training ground, Barkley told Sky Sports News: "The arrival time in the box to get goals.

"You see Mason [Mount] from midfield getting goals, you've seen N'Golo [Kante] get a goal against Liverpool. For midfielders it's really important to get goals and I scored on Wednesday.

"We're early on into the season but to get shots away early doors for me, Mason, even Kova [Matteo Kovacic] and to continue to work hard on the training pitch if you're not in the side, to put 100 per cent in and you'll get your chances and you'll get into the side.

"I'm enjoying it. I'm working really hard. [I'm] in the England side and getting game time but I'm continuing to work hard with the manager on the training pitch helping each individual through the experiences he had on the pitch as a player. It's helping us all develop really well."

A resurgent Barkley has made his way back into Gareth Southgate's England plans too, featuring in all four European Qualifiers since missing out on the 2018 World Cup squad following a series of injuries.

His Chelsea and England team-mate Ruben Loftus-Cheek is also a favourite of Southgate, and he could provide competition for Barkley at both club and international level upon his upcoming return from injury.

Barkley said: "If you're playing for a big side like myself, you're always going to have competition for places. It's normal.

"That's why you come to teams like this because the squad that you've got as a whole, you're going to all help each other to win a trophy and to get better over the years.

"With the likes of Ruben [Loftus-Cheek] coming back there's competition for places and there's versatility in some of the midfielders that can play in higher positions up the pitch as well, so it adds great balance for the squad."