Andy Robertson says Liverpool's players can have no complaints with goalkeeper Alisson despite his mistake against Manchester United.

The Brazil international fumbled Romelu Lukaku's cross into the path of Jesse Lingard for the equaliser at Anfield, and it could have proved costly had Xherdan Shaqiri not scored twice in final 20 minutes to secure a 3-1 victory.

It is the second time Alisson has made an error which has led to a goal after his Cruyff turn against Leicester allowed Rachid Ghezzal to score.

Alisson has kept 10 clean sheets in 17 Premier League matches, conceding just seven times, and his added-time stop against Napoli last week kept his side in the Champions League.

"He has been unbelievable this season and we all make mistakes," said Reds defender Robertson.

"If Mo Salah or [Roberto] Firmino make a mistake it maybe doesn't get punished because it is up the other end but that is unfortunately what a keeper has to put up with, if they make a mistake it usually turns into a goal.

"Of course, he will be disappointed with it but he bounced back and we can't moan about it. He has dug us out Tuesday night and we are still in the Champions League because of him.

Liverpool returned to the top of the table with their win over United and lead Manchester City by a point again with the title battle increasingly looking like a two-horse race.

Third-placed Tottenham are already six points off the pace, with Chelsea eight adrift, and it seems Liverpool and City are going to be the ones exchanging blows at the top.

Robertson is confident Liverpool can hold off the challenge of Pep Guardiola's side, and they could extend their lead to four points with a win at Wolves on Friday.

"We are in December, we know how tough this period is but we are top of the league," he added. "We have just got to keep this period going.

"We know how good Man City are - we have a bit of a gap that has opened up now (to third) - and the two of us are close to each other but we believe we can stay top.

"There is a long way to go and we still have to play big games, starting on Friday night and we hopefully move on from there.

"It has been a huge few weeks. People maybe looked at the fixtures and thought 'Everton, it's a derby, always tough, Bournemouth, always tough, Napoli was a must-win and Man Utd speaks for itself'. 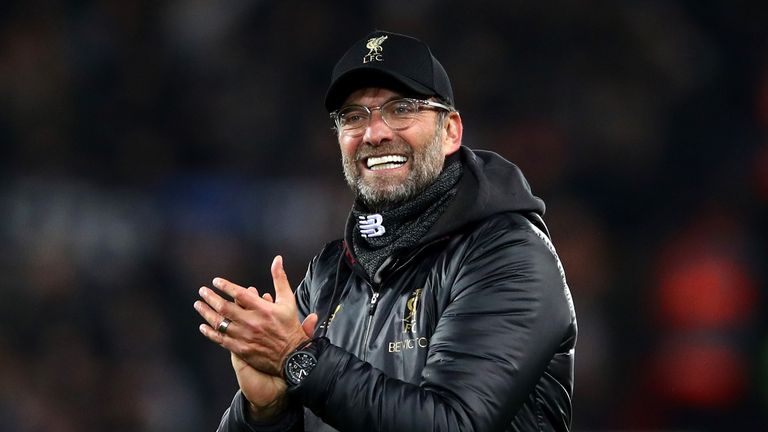 Liverpool manager Jurgen Klopp says his side's performance in the first 30 minutes against Manchester United was the best since he has been in charge at Anfield.

"We have come out unscathed but we need to move on from that. We can't just say 'four games, we have played well' and take our eye off the ball.

"We need to stay focused 100 per cent and look forward to the challenge at Wolves who have done well this season."