Liverpool will field two squads simultaneously, playing Aston Villa in the Carabao Cup on December 17 and the Club World Cup semi-final in Qatar the next day

Jurgen Klopp says the logistics behind Liverpool's back-to-back games in the Carabao Cup and Club World Cup next month are yet to be decided.

Ahead of their Champions League tie with Genk, it was announced their Carabao Cup quarter-final against Aston Villa will take place Tuesday, December 17 as originally scheduled.

It comes despite Liverpool's involvement in the FIFA Club World Cup in Qatar, with the Reds' first match in the competition taking place in Doha on December 18 - the day after their quarter-final at Villa Park.

Klopp had threatened to pull out of the competition if the fixture was unable to be rearranged in order to avoid a clash, but a compromise has now been reached, although the Liverpool manager remains unsure on the concrete plans.

"We don't know exactly yet [how the logistics will work]," Klopp told a press conference following Liverpool's 2-1 win against Genk. "We have an idea how we'll do it but it's too early to speak about that.

"We had to make a decision now and we made the decision because all the other alternatives were more problems than solutions. And that didn't work out. So we said, OK, that's how we can do it as good as possible for us. All the rest, we now have a bit of time to think about that.

"We have more important things to do now - today playing a game, then concentrating on the next game. But in these next couple of weeks we will make a decision how exactly it will look. But at the end, a Liverpool team will play, 100 per cent.

"The Carabao Cup, it always sounds like we don't want to play it but that's not true. What I don't like about the Carabao Cup, to be 100 per cent honest, is two legs in the semi-final. I don't understand that. The rest is a nice competition.

"The Club World Cup, you play only if you win the Champions League and that doesn't happen in your life five million times, so that means we will take the opportunity if they ask you. Is it the best time of the year? No. Are we pretty busy? Yes. But you go there and we try to play all the games we have with all that we have."

But there was some good news for their congested fixture list with their victory on Tuesday seeing them go top of Group E above Napoli, who they host at Anfield in two weeks time. Should they win, they will book their place in the last 16 as group winners with a game to spare, which would allow Klopp the luxury of resting some key players in their final match away to Red Bull Salzburg. 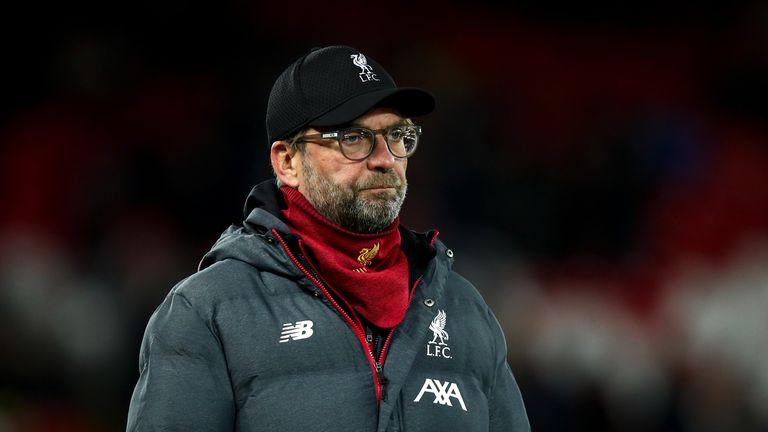 Speaking about the Champions League win, Klopp added: "The most important thing is that we won and nobody is injured. The result is because we didn't finish our situations off like we should and could have done. That keeps the game pretty exciting and left Genk pretty much alive.

"We scored again, a really nice goal, but the longer the game goes the more the momentum goes to the other team, if you don't finish your situations off.

"'Job done' is the headline from the game, pretty much. But the group is not decided. We knew from the beginning it's a tough group. Yes, now we are first in the table but we only really want to be first after the last matchday. We have to play two tough games, two important ones. In each of them we can decide it with a win but that sounds easier than it is because both games will be really tricky."

Analysis: What should Liverpool prioritise?

"The big question is if he is going to coach both games because there is no doubt the strongest team will be in Doha and should do because he is competing for a trophy and the other game is competing to progress to the next round - they are two different things. If you were to rank which was higher in terms of silverware, I think the players would consider the Club World Cup.

"When you're faced with a situation where you can't choose because a game is being played within 24 hours of each other, the realities are you then have to select where your priority is and that's going to be in Doha. In the Carabao Cup, Aston Villa might be thinking it will be an easy game so there is no pressure on a group of young Liverpool players in that game, which in itself could be quite interesting, but I think Klopp can only manage with what is put in front of him.

"I think it has damaged the integrity of the Carabao Cup for it not to be considered in the scheduling. Surely we're all thinking there must be another window of opportunity but clearly there isn't.

"If they were to win this weekend [against Manchester City], it would be a good lead taking them into this busy period because there is no doubt in my mind that their schedule will cause problems down the line for freshness in those players because they're human. To have to play every three days like that, it's pretty extensive and the lead could afford them a cushion in the Premier League."