Trent Alexander-Arnold and Andy Robertson on defending, Liverpool's success and their relationship 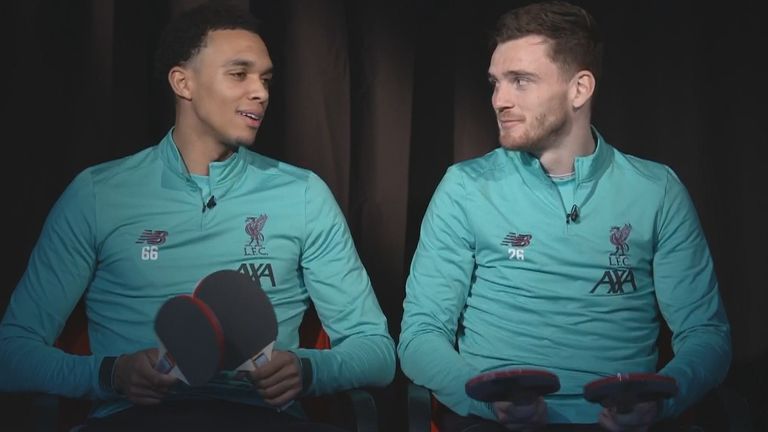 Trent Alexander-Arnold and Andy Robertson talk to Sky Sports News about the relentless nature of life in the Liverpool defence.

Ahead of Liverpool's trip to Watford on Saturday, Trent Alexander-Arnold and Andy Robertson discuss their starring roles in the Reds' remarkable season.

Liverpool remain unbeaten in the league and on course to claim their first title in 30 years under the guidance of Jurgen Klopp, with Robertson and Alexander-Arnold both key components of the German's unrelenting team.

The duo discuss their relationship, why the Liverpool team have enjoyed such success over the past two seasons and insist their focus is always on defending first, despite their impressive attacking output.

Liverpool will look to make it 28 games unbeaten when they travel to Watford on Saturday evening, a game you can see live on Sky Sports.

What do your recovery stats say about the side?

Andy Robertson: "I think it says when we lose the ball our impulse is to get it back straight away. That's our attitude. We counter-press a lot and we try and win the ball back as quick as possible if we lose it.

"Our stats are good but I'm sure Bobby [Firmino] and that will have high ones as they win the ball back and Hendo [Jordan Henderson]. But that shows that we're good at keeping the pressure on teams and winning it back when they're trying to counterattack."

Is attacking or defending more important for you?

Trent Alexander-Arnold: "It's defending. It's the foundation to any result. You get a clean sheet you can't lose the game. That's our mentality.

"If we build the foundations with the defensive work and not conceding, we then have the attackers and the midfielders and even ourselves to go forward and create goals.

"More times than not we do score in games, so if we keep clean sheets we will win games."

How does that translate to your attacking displays then?

Robertson: "Trent has said we believe that we can keep clean sheets and I think the midfield is key to that. The manager wants us to get forward, he wouldn't be happy if me and Trent were just stood on the halfway line defending and the back four just stayed where they are. It's up to us to take the opportunities to get forward when we feel it is right.

"We have people like Fabinho, Hendo, Milly [James Milner] and Giji [Wijnaldum] who will cover for us, or sometimes they go and we cover for them. It's all about getting the balance right. Different games see different spaces open up and on the wings there is sometimes lots of space that we need to capitalise on.

"It's no use to us if we're just sitting back and focusing on the clean sheet because we know we can create chances and we've proven that."

Robertson: "I don't think it's about advice and we're not in a position where we'll give each other advice. We'll have banter after games if somebody gets an assist and the other doesn't, or somebody misses a big chance from one of our crosses.

"I wouldn't say it's a rivalry because if Trent gets an assist I've never felt like 'uh, he's miles ahead of me' or anything. It's for the good of the team and we're always the first to celebrate with each other when we do assist.

"After the game it's never more than a bit of laughter. At the end of the day if there is a bit of competition there it's helping the team and we've proved that over the last season and a half.

How do you feel when people say you've changed the way full-backs are viewed?

Alexander-Arnold: "I don't think I've tried to change it in terms of 'everyone follow me because I'm playing well and this is how you should do it', as every player is different. Us two don't play the exact same way.

"We're just more attacking based full-backs. We've just been given the freedom by the manager and the players around us in the system to get forward a bit more than other teams and express ourselves. So I think it's more just trying to create for the team rather than think how we can make people want to be full-backs, because that's not our goal at the end of the day. That's to win games and be successful for the club.

"If changing the way people look at full-backs happens in that process then that's also probably a good thing, because previously there have been comments and thoughts about the position that are hopefully changing."

Robertson: "It's amazing and we can involve Alisson in that as well. We have such good relationships with each other.

"Virgil [Van Dijk] is the leader of the pack as he's more central and can see the game a lot more. He's the one who gets us going and leads us the way he knows how.

"But whoever is playing, we've had changes there, nothing changes in the attitude and commitment to keep clean sheets and that's installed in us from the coaching staff."

How do the side maintain their relentless nature on the pitch?

Robertson: "One of the manager's sayings to us is if you add up all the 90 minutes you play this season and add it to your life, it's not that long a time. It might feel like it in a three-game week, but if you add it up in your life it's not that bad.

"That's why we burst through barriers that we can do and you've got that voice in your head saying you're tired, so it's about trying to keep that quiet.

"That's why we've had late goals, we've had comebacks and we've had wins when people thought we'd be tired. That's why we're in the position we are and we don't take that for granted."