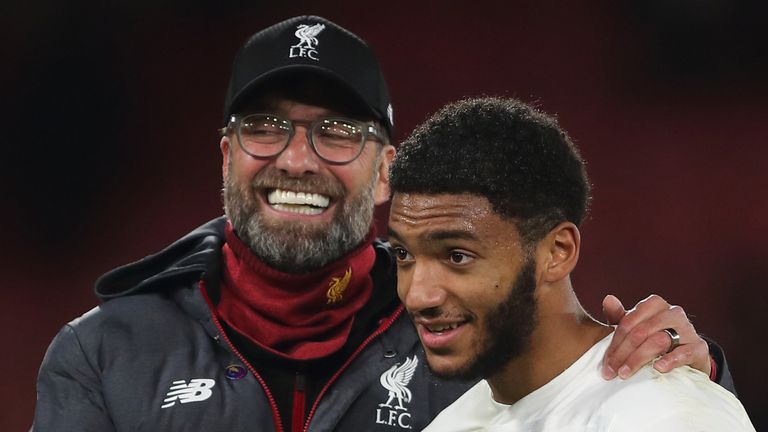 Joe Gomez says he didn’t realise the stature of Liverpool when he arrived from Charlton in 2015, but has faced the expectations head on

Joe Gomez discusses his relationship with Virgil van Dijk, his Liverpool move, missing football and much more in an exclusive interview with Sky Sports.

It has been quite the five years for 22-year-old Gomez. After just one senior season at Charlton Athletic, he moved to Liverpool in the summer of 2015 and despite some obstacles, has never looked back.

Speaking to Kelly Cates and Jamie Redknapp on The Football Show, Gomez admits that he did not fully understand the stature of Liverpool when he joined as an 18-year-old, but has embraced the expectation.

"I had a close knit unit of my Dad and my agent and Charlton was my local team and where I grew up but my aim was to always progress and move on," he said.

"In the summer when the season ended, we started to hear inklings of things and a couple of options. It was daunting because all I knew was south east London, I was still living at home with my Mum and Dad but at the time, I went and met Brendan [Rodgers] and he made me feel assured.

"I knew it wasn't going to be a straight forward process and it was something I had to think long and hard about. In a team with the stature of Liverpool, I wasn't going to walk in and expect to play and it might take me a few seasons of loans and bouncing around here and there.

"Football was all I knew and looking back, it was daunting. It's a massive club and to be honest, I don't think I realised the stature of the club and what I was getting in to in terms of the expectation.

"I think as soon as I went into pre-season, I realised the size of the club. I was used to staying in the UK and going for a training camp somewhere, but in my first Liverpool pre-season, we went to Thailand. We turned up to the hotel and it was ridiculous, security everywhere and hundreds of people. Straight away from there, I realised. 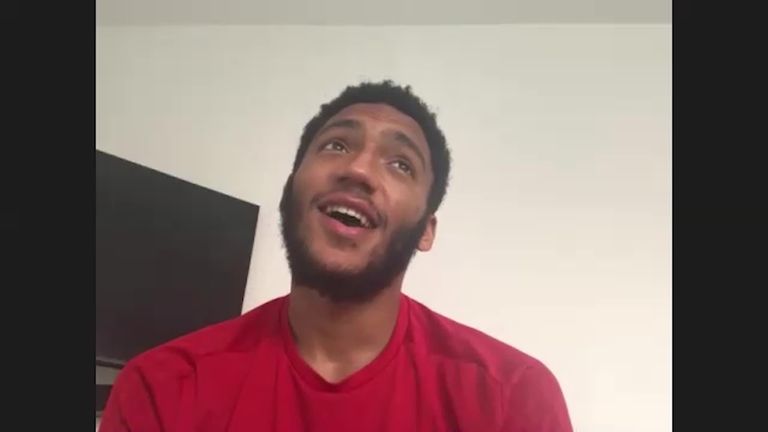 Gomez reveals his Isolation Island items, plus a bonus answer on which Charlton and Liverpool team-mates he would invite to join him

"We then flew to Australia and played against Brisbane Roar and the stadium as packed. That was the first time I heard 'You'll Never Walk Alone' and I thought 'yeah, this is a different scale'.

"Charlton were massive [for my development]. As a whole, I was lucky to be in the academy and there were definitely periods when I was younger where Charlton had to show faith in me, like when I was going through phases of growth spurts, little niggly injuries and just finding your feet - I was probably Bambi on ice for a little bit.

"The main influences were Steve Avory and Paul Hart. Paul was a known defender in his day and he definitely prepared me for men's football and what it meant, not just on the development side but playing for points and the psychological aspect of things in that sense.

"Steve was very much the one to help hone and work on my ball control and that sort of thing. It was a massive influence on me, that period at Charlton, and it definitely shaped me."

Gomez already has a Champions League winner's medal on his mantelpiece, but says the Madrid final in May - when Liverpool beat Tottenham 2-0 - wasn't quite the memorable occasion one might suspect.

"I came on late in the game as well and it was pure butterflies. I was extremely nervous but after that, it was the next couple of days where I don't think I've experienced a high in football like it. Liverpool as a city, the way everything came together and the support we got when we came back was unbelievable.

"The fact that we basically hadn't slept, we came straight back from Madrid, got on the bus and everyone was still so alive and happy just shows what it was like. Even now, looking back at the pictures when we're going through the town centre, those will definitely be pictures I'll show my son and be proud to say I was on that bus."

'Virgil is my mate at the end of the day' 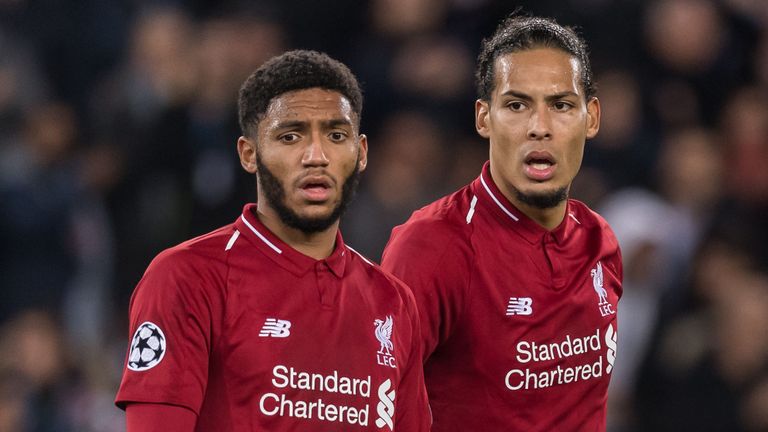 After suffering with some serious injuries in his early Liverpool career, Gomez has cemented himself as one of Jurgen Klopp's first choice defenders and has formed quite the relationship with Van Dijk.

"I've said it before, but the stature of Virgil before he came to the club was massive," he explained. "I was a young centre-back, hadn't really gotten as many games there [at Liverpool] as I would have liked but as soon as he came in, he reached out with open arms and we formed a bond straight away.

"The fact that he is a down-to-earth person off the pitch, we get on really well and we have a great relationship. We talk and in times like this, we FaceTime and speak about general things so that helps on the pitch when you have an understanding. He's your mate at the end of the day.

"Sometimes he gives me an earful, but it's a massive help and a confidence booster just having someone like him beside you. When there's a one on one battle, you know he's going to dominate, he doesn't really lose headers at all.

"Just having him alongside you and his presence, it's not just me, it's the whole team and the stadium, when Virgil goes down, I think there is a bit of a gasp and a worry but he's a real dominant force and a pleasure to play alongside."

'Lockdown shows that everyone is normal'

At the moment, Gomez is following the government's guidelines and training at home but is missing the pitch. However, he says the current lockdown has put things into perspective.

"I think I take for granted that feeling of satisfaction when we've played 90 minutes and you come in the dressing room and hopefully you've won, but you just feel satisfied like you've done something," he reflected.

"Every day training at home for us now is like grinding it out, there are no highs and lows in the session, no atmosphere or thrill from the fans, it's obviously a lot duller than when you're playing 90 minutes.

"It definitely puts perspective on things. As people in general, when there's a sporting event, it's one of those rare moments when you're really immersed in the now and you're just focused on what you're watching. The rest of the time when we're at work or in the house doing other things, your mind can be elsewhere. That 90 minutes is when you're watching the game and really emotionally attached to something that you enjoy.

"As footballers, we're definitely in a different state of mind to what we normally would be. It was 90 minutes, stop, recover and then think about the next game, whereas now, everyone is put into this category and everyone is normal at the end of the day. It shows no one is above anyone, everything stops at a time like this. Football stops, everything stops.

"It shows that we're just normal people and I think that's able to come across more now because there's nothing to do. We're not playing and we're not doing anything to compete so when you take that side, we're just fathers, friends, parents and so on."

'My England debut was a surprise'

One of the many sporting events to be rescheduled because of the coronavirus pandemic is Euro 2020, which England had already qualified for.

Gomez would have been a likely inclusion in Gareth Southgate's 23-man squad, having made his debut as a substitute in November 2017 against Germany before starting in the following friendly against Brazil a few days later.

Speaking about his first England appearance, Gomez said: "My actual debut was a bit of a surprise really. The first game was against Germany, I wasn't starting but I was still very nervous.

"But in my head, I didn't even expect to be a first choice sub or a go to if there were any injures so I was nervous and had butterflies but the preparation is slightly different. Whether you like it or not, it's not the same as knowing you're starting from the get-go.

"Quite early on in the game, Phil Jones got injured and I still didn't expect to get the call, but Steve Holland turned and gave me the shout. It was blessing in disguise in that I was just thrown straight into the game quite early on. It was special and then we played Brazil in the next game, which I started in, but that helped just having that exposure in my debut.

"I went into the camp thinking I wouldn't have minded a slightly easier opposition, but it's part and parcel of playing for England."