Liverpool defender Trent Alexander-Arnold has been named Premier League Young Player of the Season for the 2019/20 campaign.

Alexander-Arnold, the only nominee also on the Player of the Year shortlist, was instrumental in Liverpool's title-winning season and recorded 13 assists - second only to Manchester City's Kevin De Bruyne - as well as 14 clean sheets and four goals.

Jack Grealish was also nominated after helping Aston Villa secure Premier League survival as well as Dean Henderson, the Red Devils goalkeeper on loan at Sheffield United who has been tipped to replace David De Gea at Old Trafford.

But it was Alexander-Arnold, who is now believed to be worth more than Paul Pogba according to a recent study, who picked up this year's gong.

'Alexander-Arnold can inspire next Liverpool generation'

Alexander-Arnold can be a "huge inspiration" to the next crop of youngsters at Liverpool, according to newly-appointed under-23s coach Gary O'Neil.

"I think it'll be a huge inspiration to them," O'Neil told Sky Sports News. "He's been absolutely fantastic. I was watching his 13 assists last night and he has such variety - they are inswingers, outswingers, crosses from deep, corners, and he's a modern-day full-back.

"What it shows the lads in our group is that if you're good enough the opportunity is there but also that the level is extremely high.

"So there's a lot of hard work to get to that level and make sure you're good enough when the chance comes."

'He's a playmaker from right-back'

When you think of the world's best full-backs from the past, you think of Roberto Carlos and Cafu bombing up and down the line.

Trent also gets and up and down the line, and we've had that for a while with attacking full-backs. But this is almost running a game from his position and we haven't really seen that before. He's a playmaker from right-back.

The range of his passing is almost like Kevin De Bruyne, you could argue they're the best two passers in the Premier League. But one's a midfielder and one's a full-back. 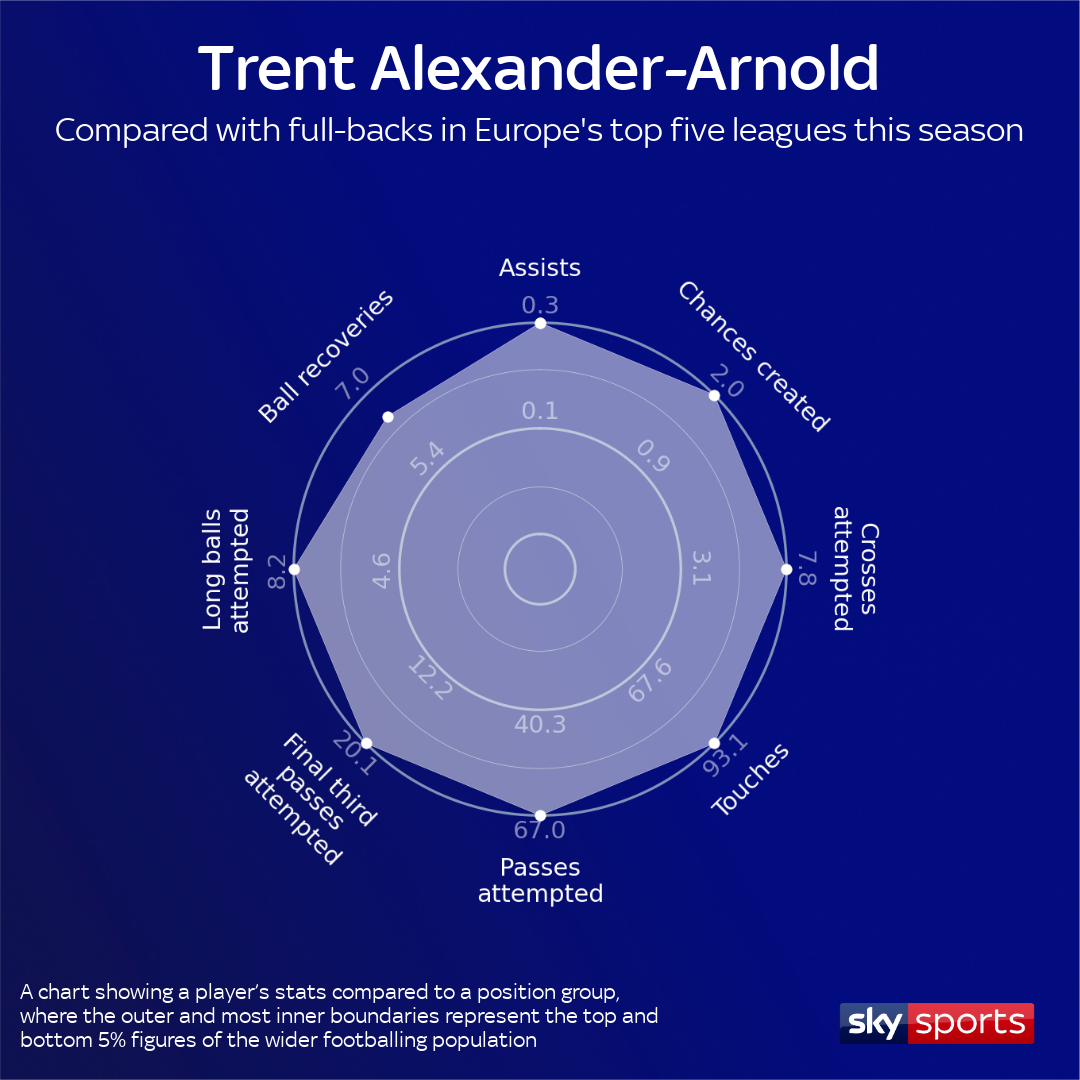 'Trent could play anywhere in midfield'

I think the boy could play anywhere in midfield. He started out as a central midfield player and then saw an opening at right-back.

You would be reluctant to take him away from where he is because a large part of Liverpool's attacking play comes from him and Andrew Robertson. They have high energy levels, and when they get into the last third, they can deliver.

Looking at it now, you've just won the league, you are the current European and world champions, so if it ain't broken, why try to fix it?

But the modern defender today, at the top clubs, has to be able to take the ball and play and deliver in the final third, so why not?