Liverpool claim third successive victory at the start of the season with 3-1 defeat of Arsenal; Sky Sports pundit Roy Keane had lavished praise on Liverpool but referenced 'sloppy' defensive moments 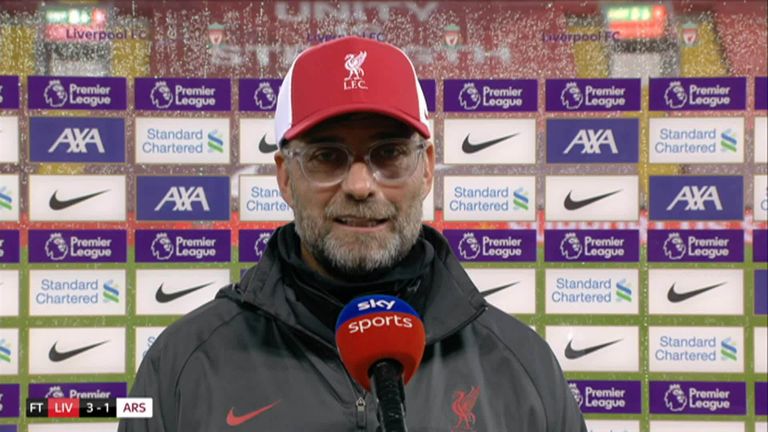 Jurgen Klopp was full of praise for his Liverpool side but wanted clarification from Roy Keane after hearing the former Manchester United captain describe aspects of their game as 'sloppy'.

Liverpool boss Jurgen Klopp has rejected Roy Keane's suggestion his side had 'sloppy' moments in their defeat of Arsenal, insisting the champions only deserved praise for their 3-1 victory.

Mishearing what the Sky Sports pundit had said about his team, the Liverpool boss insisted his side's performance had been "absolutely exceptional".

Asked to reveal by Sky Sports what he liked about Liverpool's display as they defeated the Gunners, Klopp responded: "Everything! Did Mr Keane say we had a sloppy performance tonight?"

Interjecting, Keane clarified: "I think they gave up one or two opportunities, but they'd be disappointed with it."

"Can you say that this was a sloppy performance tonight?" continued Klopp. "I'm not sure if I heard it right, but maybe he was speaking about another game as it can't be this game. Sorry, that's an incredible description of this game.

"This was absolutely exceptional. Nothing was sloppy, absolutely nothing. From the first second we were dominant against a team in form, 100 per cent in form, and you have to be careful for the counter-attacks.

"Alisson had to make one save, they had two balls in behind that we cannot avoid and you need a goalkeeper for that, but the football we played tonight was exceptional. For this game tonight, there's nothing bad to say."

Keane: "I said there were sloppy moments, but I said your team were outstanding. I've been giving the club nothing but praise so I'm not sure you've heard me correctly there."

Klopp: "I heard the word 'sloppy', that's all, so I imagined you must have watched the wrong game."

Keane: "You need to watch the rest of it."

After the interview concluded, Keane then remarked: "Very sensitive, isn't he? Imagine if they'd lost!"

So what had Roy Keane said about Liverpool?

Here's what the Sky Sports pundit had to say about the champions after their 3-1 win:

"It was a good night for Liverpool. There was never really any doubt. I know they had one or two chances in the second half, but Liverpool were by far the better team.

"We'll probably give Arsenal a little bit of credit for the fact they stayed in the game. But overall Liverpool certainly deserved the victory.

"...It was a good night's work for Liverpool, who were by far the better team. There were one or two scares but they deserved the win. They're like a machine and one of the fittest teams around. They like to suffocate teams. It's never easy to score goals but they managed three tonight, four against Leeds. It got a little bit sloppy at the back but it's job done.

"Arsenal are always a threat going forward but their issues have always been at the back. The opening goal is soft and would've given Arsenal plenty of encouragement."

Roy Keane won't let it go... but he predicts Liverpool to retain their Premier League title this season pic.twitter.com/13iHgnDRfz