Jurgen Klopp on Liverpool's academy graduates and Vitor Matos: 'The door for the kids will always be open'

In an exclusive interview, Klopp talks hopes for Liverpool's academy, 'connector' Vitor Matos and why youth development is off, as well as on, the pitch; watch Fulham vs Liverpool live on Sky Sports Premier League and Main Event from 4.15pm on Super Sunday; kick-off 4.30pm

Jurgen Klopp still feels caught "in the middle of a whirlwind". So much so, the challenges of the present have left even Liverpool's triumphant recent past a little blurry.

"You can't imagine how far away winning the Premier League feels at the moment. Wow! Was it really only a few months ago?"

Klopp has long braced himself for a "slog of a season" after the disruption of injuries - significant ones in the cases of Virgil van Dijk and Joe Gomez - and pandemic protocols; amid his fears over fatigue and his impassioned opinions on substitutes and Stockley Park.

He has, by his own admission, felt there has "not been much to smile about" but the last fortnight has brought a string of moments to freshly stir the Liverpool manager.

His reunion with 1,500 in Anfield's Kop, celebrated with a trademark rattle of fist-pumps. The European debut from young goalkeeper Caoimhin Kelleher, so assured it drew an impromptu bear hug. The armband handed for the first time to West Derby lad Trent Alexander-Arnold.

They have been moments borne out of necessity, products of the present. And yet also glimpses into the future; small symbols of hope, opportunity, evolution.

Kelleher has, like Nat Phillips and Rhys Williams, emerged to Klopp's relief towards the end of a difficult year. Neco Williams and the increasingly impressive Curtis Jones, two more academy graduates, combined for the winner against Ajax at the start of the month. Against Midtjylland, a starting XI including teenagers Billy Koumetio and Leighton Clarkson was the youngest the club has fielded in the European Cup. Liverpool had 10 senior players out at one stage yet they remain level at the top of the Premier League, only seven goals conceded in their last 12 games overall.

Klopp can smile when he thinks about it because the resilience of his wider squad is a testament to the club's futureproofing and he believes there will be a ripple effect. 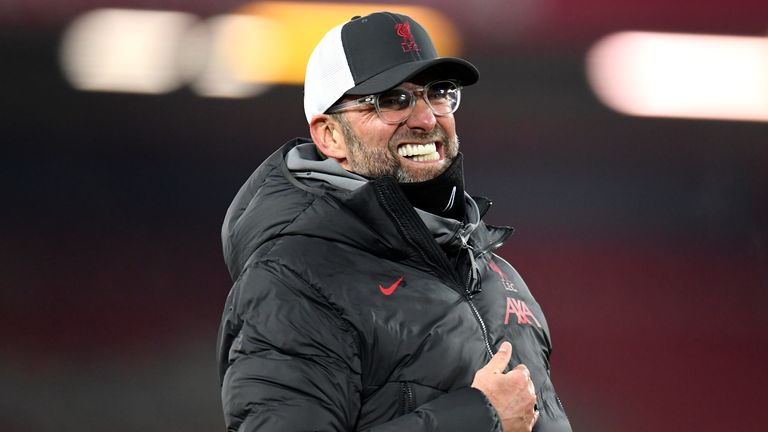 Jurgen Klopp looks ahead to Liverpool's trip to Fulham, live on Sky Sports, and insists Scott Parker's side cannot be underestimated

"If we're living in dreamland, of course we want all the boys to be fit and still give the kids some opportunities. That would be the ideal scenario.

"The injury situation we've had has been... pfffff. But it has helped them get more minutes.

"Rhys Williams? From the moment he trained with us, I could see he was a proper talent. Billy Koumetio? Incredible. Caoimhin? It's certainly given him the opportunity and he's done exceptionally well. We were always sure he was a massive talent but no one can say exactly he will react in a proper, proper game. He looks like a calm person - and he is! But he's also a very good goalkeeper.

"It's just the start. It's about your career, not just your first game, but for all the academy players at this moment, seeing the number of guys playing now in the first team, that will give them a proper boost, 100 per cent."

Klopp is speaking to Sky Sports from Liverpool's new Kirkby training ground, a £50m complex that also represents the future and epitomises the manager's mantra that the club, under his watch, "will not sleep".

It has ached leaving Melwood - the "sorry wilderness" transformed by Bill Shankly into such a prolific talent- and memory-maker - after 70 years but the high-tech facility six miles away crucially houses Liverpool's first team and academy on one site for the first time in the club's history.

The pitches have been laid out to symbolise progression, the main glass-fronted building shared by Klopp's squad and the U23s the destination. The design has deliberately separated territories - a reminder that making it here does not mean making it - but Klopp can now watch the next generation from his balcony and connections should improve chances.

"When you move to a new house and it's as nice as ours... it's raised everyone's mood in difficult times.

"Will it raise everyone's levels? We'll see - using Kirkby the right way is more a long-term project I think - but we came here to be closer together in our daily work. There are a lot of former academy players in the squad right now but we want to have even more."

The hope is that the examples set by senior players like Jordan Henderson and James Milner will have even greater impact from close range but a man pivotal to smoothing pathways is elite development coach Vitor Matos.

Matos joined Klopp's staff from Porto just over a year ago and was the man who identified Rhys Williams as a solution to Liverpool's initial defensive injury crisis. He is tasked as a link across age groups but Klopp insists his most vital work is not about quality control over tactical elements but instead the human aspects of development; his ability to mirror the deep empathy of the German's leadership style.

"We employed Vitor, not because the academy wasn't working as well as we wished but because we needed a connecting point.

"Pep [Lijnders] was doing that too but first-team coach is a big job; we needed someone in that development coach role who knows both sides and Vitor is doing an incredible job. When we had our first struggle with the centre-halves, he suggested Rhys. It helps to have someone with a proper eye on the academy and someone who knows what we need in a crisis. Yes, we need players but what kind of players?

"He's working really closely with all the academy; from U16 upwards, we're really close but we can't be that close with the U14s or U12s for example. The academy coaches know what we expect them to do but it's not always just about playing our way.

"We want to give the boys a wide education. We want to know that they will be able to react later in their careers to different scenarios. Vitor is really important for the one-to-one relationships. Yes, up in the first team, we think we're open and pretty friendly but it can take time for someone to really feel like they can show themselves.

"I'm not able to have those long talks each day with all of the boys. There will be a moment when it happens but it's Vitor's job to make sure that they know what to expect, that they know we think they're good enough, that they understand the opportunity without feeling pressure."

It is credit to Matos's work that those elevated to Klopp's ranks have absorbed the scrutiny so impressively.

Liverpool's drive for self-sufficiency, for players from within possessing the right mental as well as technical capabilities, is bearing fruit.

Klopp described them in the summer as a "different kind of club" when asked about Chelsea's outlay of more than £200m and while Diogo Jota and Thiago arrived at Anfield during the last transfer window, Liverpool's net spend was little over £30m.

A carefully constructed transfer strategy could yet temporarily shift in January to provide peace of mind over a position that the experienced Fabinho has also helped to cover. Klopp believes Liverpool will remain flexible in the market but is adamant his commitment to what he calls his "internal transfers" will continue.

"But the door for the kids will always be open. Always.

"The better they are, the earlier it will happen for them but we don't want them to feel if they're not ready now, we'll just stop believing in them."

It is just as key, Klopp says, to provide the right sort of support on the pitch.

"To give the kids the platform to shine, you need a solid base. The sort you get from top, experienced players.

"The Midtjylland game is a good example. Fabinho played the first half and without talking a lot, he organised the last line. All the boys could trust in their play. Billy's an incredible talent but when Fabinho goes off, the responsibility shifts slightly; now Rhys is the older one.

"You always need a spine in the team - then you can bring the kids around them."

It is no easy feat, even with Liverpool's resources, to reconcile the desire to nurture with the demands of life at the very top. "The aim is to bring a team onto a football pitch that can win a game; there are five million ways, we only need to find one."

But even when he is caught in the chaos of the present, Klopp cannot help but think of the future. Of futures.

"Our responsibility is to educate all our academy players so that they can have their best possible career," he says, with emphasis now.

"That might be Liverpool - that would be great - but it might be another club, perhaps in the Premier League, maybe in the Championship or League One.

The Liverpool kids are doing just that and, in the whirlwind, Klopp is finding some sense of calm.