Arsenal have confirmed the departure of England forward Danny Welbeck, who leaves the club at the end of his current contract along with goalkeeper Petr Cech and defender Stephan Lichtsteiner.

Midfielder Aaron Ramsey, meanwhile, is joining Juventus as a free agent when his deal expires on June 30.

A brief statement on the club website read: "We thank them all for their contributions to the club and we wish them every future success."

Welbeck, 28, joined Arsenal from Manchester United in 2014 and went on to win the FA Cup under Arsene Wenger.

Often utilised as an attacking option off the bench, Welbeck suffered a string of injury setbacks, the latest being a broken ankle against Sporting Lisbon in a Europa League tie on November 8.

Following the Gunners' final home match of the Premier League season against Brighton, when a 1-1 draw ended hopes of a top-four finish, Welbeck was honoured with a memento from Arsenal chairman Sir Chips Keswick, and the stadium announcer added he would be "missed in the dressing room".

Goalkeeper Cech is set to retire, but has been heavily linked with a return to his former club Chelsea in a sporting director role. 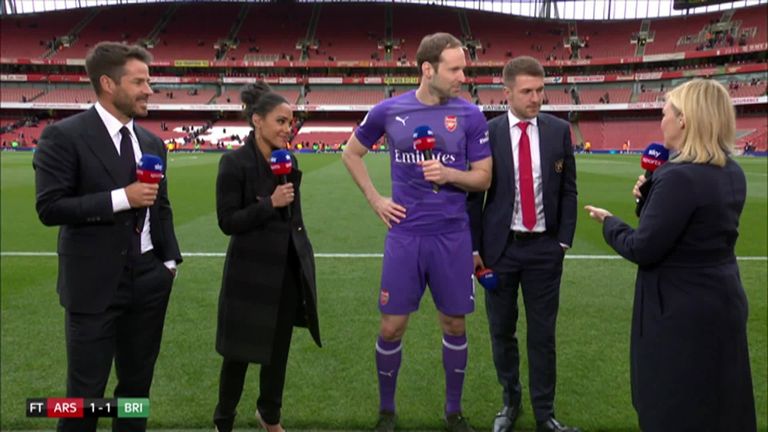 Full-back Lichtsteiner, meanwhile, leaves a year after signing from Juventus.

Switzerland captain Lichtsteiner, who made 23 appearances in all competitions for the Gunners, posted a farewell message on his Instagram account looking back on the disappointment of defeat to Chelsea in the Europa League final.

Arsenal are expected to move in the summer transfer market.

Talks are said to be at an advanced stage to sign Belgium winger Yannick Carrasco, who plays for Chinese Super League side Dalian Yifang.