Can you answer our tricky teaser on Arsenal goalscorers without the letters A-R-S-E-N-A-L in their name?

In part one of the series, Sky Sports' Voice of Football takes us on a virtual visit to Arsenal's Emirates Stadium - telling us about what it's like to work there, bringing you a few stories and even rating the food.

Martin has also recorded some of his much-loved Tyler's Teasers videos from his home. Hit play for a tricky question about Arsenal players and then scroll to the bottom of the page when you want to know the answers...

The Emirates: How I get there

By car. On the way to the Emirates I sometimes drive down Avenell Road where the facade of Highbury's old East Stand is still in place.

From certain angles you can still imagine the hustle and bustle of the old ground on a matchday: such a deep and rich history. The Emirates itself has easy access for the media with its underground parking.

Very good if you have a central position.

It is not very often that a commentator is asked to inspect the broadcasting area while the stadium is being built, so I was very pleased when, hard hat in place, I was invited by the designer of Arsenal's new stadium to comment on that part of the structure before completion.

That access was a privilege, but I am afraid my influence minimal. The height was excellent so the view from the central commentary position and the two slots either side was - and is - perfect. When Sky Sports is on site there are no problems for the chosen commentator of the day.

On my visit I made one recommendation that those central positions should be backed up by several rows tiered behind the front, so that a good number of visiting broadcasters could gain a similar vantage point.

That original design had just one long strip, the length of the pitch, so that the positions range from one corner flag to the other, the difficulty of commentating increasing the further from the centre you are placed.

Despite my recommendation they stuck to the original design! 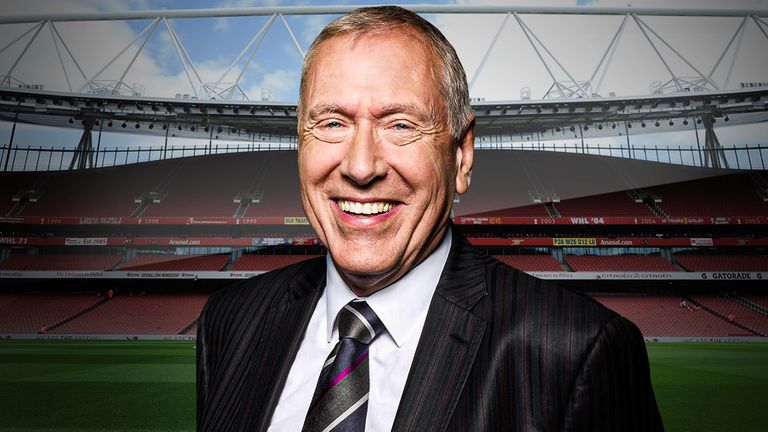 The food in the press lounge is very good and it is not unknown for some members of the Sky Sports team to pile in again!

Arsenal are in their 14th year at the Emirates Stadium and have not won the league title in that time - but they had to wait 18 years after their switch to Highbury before they first became champions.

My most notable memory of The Emirates

I'll never forget two opening games of successive seasons. In 2016 I watched Arsenal lose 4-3 to Liverpool and then in 2017 the Gunners beat Leicester City 4-3. Both were joyous games on which to commentate and both wonderful August adverts for the Premier League for the thrills ahead.

The first had the unusual double of Theo Walcott wasting an Arsenal penalty but immediately scoring from open play in the Gunners' next attack. Philippe Coutinho equalised with a brilliant direct free-kick right on half-time. In the second half the Brazilian set up Adam Lallana for the second and then struck his own second, darting towards the near most to round off a multi-pass move from Jurgen Klopp's team.

Sadio Mane then scored a superb solo goal and it looked game over, but Alex Oxlade-Chamberlain replied in kind, the type of effort which must have been remembered when the Reds later moved to sign him. Calum Chambers glanced in a header to take it right to the wire.

A year later the Gunners had the odd goal in seven on their side. Alexandre Lacazette had given Arsenal the lead 94 seconds into his Premier League debut, but a Jamie Vardy double helped Leicester into 3-2 lead with only seven minutes left. Goals, following Arsenal corners, from Aaron Ramsey and Olivier Giroud secured a memorable home win.

I always enjoy bumping into Arsenal legends who are giving matchday tours of the stadium like Charlie George, Islington to the core, with a wit as sharp as his shooting was in the club's famous Double season of 1970-71.

The food in the press lounge is very good and it is not unknown for some members of the Sky Sports team, who have eaten at our company's expense earlier, to pile in again!

The fare on the pitch can be tasty as well, but the Emirates Stadium is still searching for that extra special moment which will define it in the Arsenal story.

On Tuesday: Martin brings us his guide to Aston Villa's Villa Park.