Bernd Leno has accused Arsenal’s squad of lacking “discipline” and having “no self-confidence” during a poor run of results in the Premier League and insists Mikel Arteta is not to blame for the downturn in performances.

A Pierre-Emerick Aubameyang equaliser earned a 1-1 draw for the 10-man Gunners against Southampton on Wednesday, ending a run of three consecutive Premier League defeats - against Wolves, Tottenham and Burnley.

Pressure is mounting on Arteta, whose side are 15th and just five points above the relegation zone, and after the 1-0 home loss to Burnley, the Arsenal manager admitted he must "take the bullets" for the club's recent displays.

But Leno, who has played every minute of Arsenal's league campaign so far, insists it is Arteta's players who are primarily at fault for failing to win in the top-flight since November 1, rather than the manager.

The goalkeeper told Sky Germany: "That [pressure on Arteta] is not an issue at all. The coach is least to blame for the fact that we are in this situation.

"If you look at the way we were running around on the pitch at times, then the players are the only ones to blame. I have to be honest about that.

"We're getting red cards, making mistakes, standing out of position. These are things that we have clearly addressed a thousand times. In the end, it's a lack of focus on the part of the players.

"The coach is not an issue in the dressing room, there is no criticism of him. We criticise ourselves and the players know that they are responsible.

"We actually have quality, but all of a sudden there was this break. But nobody can pin it on just one person.

"The numbers speak for themselves that things haven't been going well lately. Before that, we often lost deservedly.

"We did draw 0-0 at Leeds, but that was a lucky point. We deserved to lose against Tottenham, against Wolverhampton as well, against Aston Villa even 3-0. Those [games] were just far too many weak results and disappointing performances.

"The attitude is bad, the discipline is lacking and we have no self-confidence. There are many factors at play here.

"We have addressed this very clearly internally and everyone agrees that we have to change this very quickly." 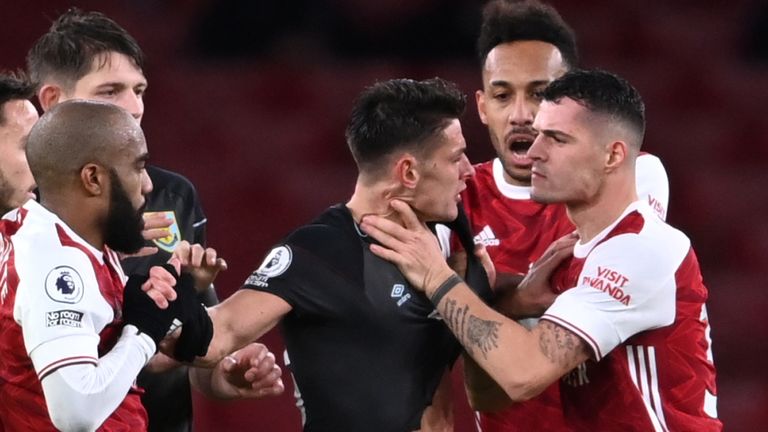 'Xhaka knows he made a mistake'

Granit Xhaka came under fire after being sent off for grabbing Burnley midfielder Ashley Westwood by the throat during their loss against Sean Dyche's side.

The 28-year-old, who was stripped of the Arsenal captaincy last year under Unai Emery's tenure amid a falling out with a section of the club's fanbase, was criticised by Sky Sports' Alan Smith for letting his team-mates down by committing violent conduct and costing the team another defeat.

The Switzerland international midfielder "overstepped the line" against Burnley, according to Arteta, but Leno was eager to defend his team-mate despite his ill-discipline.

"Granit himself knows best that he made a mistake. No one has to tell him that," Leno added.

"Of course, the coach still said it clearly, but that's it for us now. He's also suspended now. At the moment, everyone is frustrated.

"He was not in control [of himself in] the situation. No one is being pointed at internally, everyone has messed up here at some point.

"Mistakes like that happen, but they must not be repeated. Even after the sending-off, we still had the chance to equalise and win the game. For us, the topic is now over." 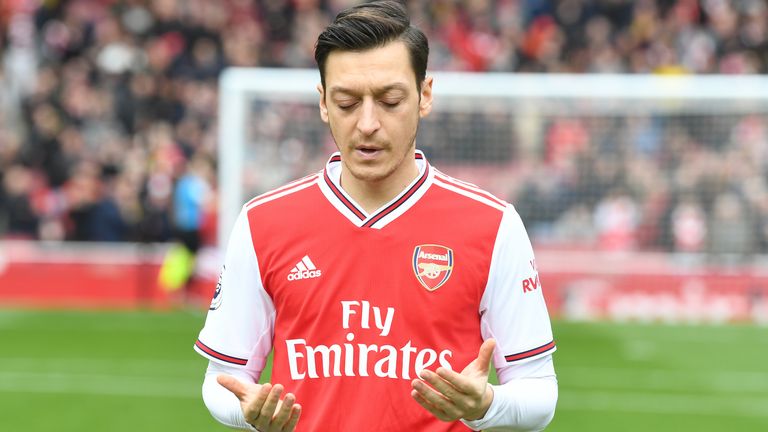 Leno's compatriot and club-mate Mesut Ozil has not played a minute for Arsenal since March, with Arteta having omitted the midfielder from his Premier League and Europa League squad for 2020/21.

Despite Ozil's deal expiring at the end of the season, he could yet feature for the Gunners this term if Arteta chooses to re-register him after the January transfer window.

"The coach has made this decision. Of course, Mesut has exceptional quality, there's no question about that," Leno said.

"But the coach chose 25 other players, and we have to accept that. He's training normally, he's behaving professionally, he gets on well with all his team-mates.

"Mesut doesn't bring any negative energy into the group. Everything else is out of his hands and out of mine."