Willian registers two assists in victory at Leicester; David Luiz and Nicolas Pepe scored either side of Alexandre Lacazette's penalty at the King Power Stadium to move the Gunners into the top half; but 'concern' over Emile Smith Rowe injury at King Power

Mikel Arteta believes Arsenal - and Willian in particular - are finally moving in the right direction after an impressive 3-1 comeback win at Leicester.

David Luiz and Nicolas Pepe scored either side of Alexandre Lacazette's penalty at the King Power Stadium to move the Gunners into the top half.

Youri Tielemans opened the scoring for the Foxes but their top-four hopes were dented, with Harvey Barnes now set to be out for at least six weeks with a knee injury after being carried off during a miserable afternoon.

It was also Arsenal's first win at a side in the top three of the Premier League since 2015 as the Gunners backed up Thursday's last-32 Europa League victory over Benfica.

"The team is clearly improving, it's taking a direction I like. It's about consistency," said Arteta, who was able to rest Bukayo Saka and keep Pierre-Emerick Aubameyang on the bench until the final six minutes. 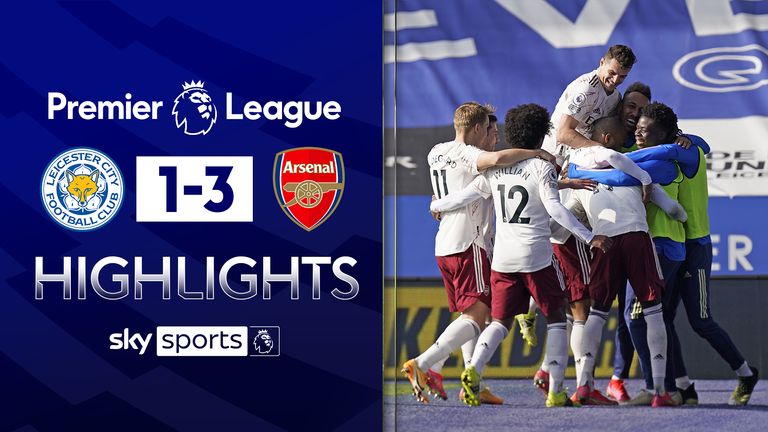 FREE TO WATCH: Highlights from Arsenal's win against Leicester in the Premier League

"We are still giving things to the opposition - we did it against Benfica and we did it today. It's something we have to eradicate to give ourselves the best possible chance.

"It's about how we played against top-quality opposition. We have to impose ourselves, it doesn't matter who we play against, we have to have courage. I'm proud about winning but obviously the way we've done it.

"The way we are playing looks much closer to what we want. The way the team is evolving, we have some consistency in recent months. All the time I say the same: it's about consistency."

The much-maligned Willian assisted two of their three goals, meaning he has registered more assists than any other Arsenal player this season with five.

And Arteta praised the Brazilian for improving both in games and in training in recent weeks.

"He was really good, but we've seen that in training in the last few weeks. He is revealing himself, not accepting the situation. I think he was the player that changed the game against Benfica, and again today."

Arteta also reserved praised for Granit Xhaka for his durability and leadership, having played 90 minutes in midweek.

"Granit, a player who has played that many minutes, to play with the heart and the passion he showed in every action I think it's a good example for the rest of the players.

"If you have to put an example on that pitch about character and going for every single ball with that determination, probably that's him.

"He's played more minutes than anybody else but he keeps going even when he's so tired and tries to help the team in the right way. And the same with David [Luiz], for someone like him at his age to play again it was tough but he showed real attitude, he wanted to play and that's the best way to approach every game."

One downside to Arsenal's win was an injury to Emile Smith Rowe, who went off with a hip injury before half-time. Arteta admitted he was concerned about the youngster, who has been a shining light for the Gunners this season.

"Yeah, I'm concerned because for Emile to come out and say I cannot continue playing it should be something. It's something related to his hip, I don't know how bad it is but he was in a good place after the game."

'Gamble? I see them every day'

Arteta made six changes for the trip to Leicester, and though Arsenal's priorities may lie in Champions League qualification through winning the Europa League, the Spaniard said he must reward players with playing time to keep the squad happy.

"Probably people will see it as a gamble but I see them train every day. If they are playing it's because they deserve to play. I think players have to feel supported and valued and the only way to do that is to play them.

"I had a good feeling that anything could happen but the performance level they showed is not just a coincidence, the way they have prepared themselves and the way they prepare themselves every day."

Two comebacks in four days have transformed the mood at Arsenal. Imagine if it had gone the other way, that they'd been knocked out of the Europa League and then beaten by Leicester? The pressure would have heaped on Mikel Arteta, with Arsenal's season effectively over.

Instead, they're alive and kicking, with Pierre-Emerick Aubameyang's late winner keeping their European campaign going and an impressive response to going a goal down at Leicester allowing them to look up the Premier League table.

After a trip to Burnley next weekend, consecutive league fixtures against Tottenham, West Ham, and Liverpool look key in determining whether the Gunners can beat the odds and close the gap on the top four. But they now at least look confident heading into that domestic challenge and their Europa League tie with Olympiakos.

The performances of Willian, Nicolas Pepe, and Martin Odegaard will also lift the Arsenal supporters for this key period. Willian repaid Arteta's faith in him by setting up two of the goals, while Pepe, who tapped in the third, produced one of his best performances in an Arsenal shirt.

Odegaard, who came on for the injured Smith Rowe, will now need to take on the responsibility at No10 if the Englishman is out but showed off his quick feet in the build-up to Pepe's strike and is looking more assured and accomplished in this side.

Arsenal still have plenty of issues to address - they were all over the place for Leicester's opener and were wasteful with possession in the final third during much of the first half - but with confidence-boosting results behind them, they can attack these defining fixtures coming up with belief.

Arsenal now head to Burnley on Saturday March 6 at 12.30pm in the Premier League, before going to Olympiakos in the Europa League last-16 first leg on Thursday March 11 at 8pm.