Mikel Arteta: Arsenal boss desperate for signings and expects Kroenkes to back him in transfer window

Mikel Arteta is anticipating a big summer of activity at Arsenal; 'Things are going to have to change and the owners are going to back it up', said the Arsenal manager; Arteta also said he still has faith in himself to coach a top club after Thursday's elimination from the Europa League

Arsenal manager Mikel Arteta says his squad "needs changing" after a dismal season and insists the Kroenkes will back him in the transfer window.

The Gunners crashed out of the Europa League on Thursday after losing to former boss Unai Emery's Villarreal over two legs in the semi-final and are languishing in 10th in the Premier League ahead of Sunday's visit of West Brom with four matches left to play. 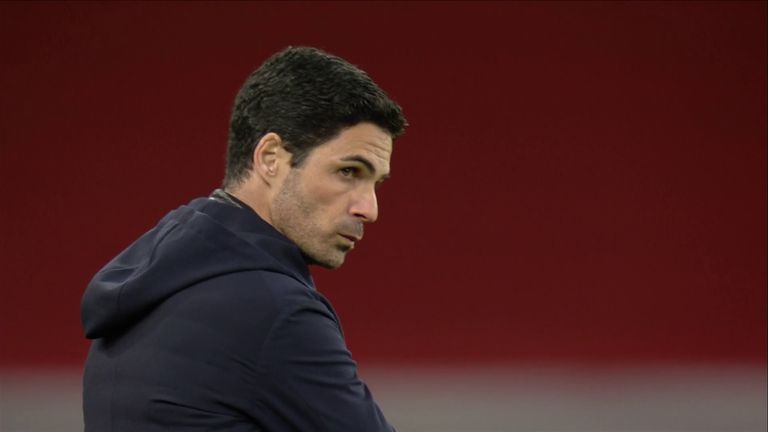 But the Spaniard has also overseen a big clear-out of Arsenal's fringe players, moving on Mesut Ozil, Sokratis, Sead Kolasinac and Shkodran Mustafi.

Stan Kroenke, Arsenal's owner, has been criticised for his lack of investment in the first-team squad since taking ownership of the club in 2011, but Arteta is optimistic there will be cash to spend this summer.

"The squad needs changing." said Arteta, who is on the verge of overseeing Arsenal's first season without securing qualification for Europe since 1996.

"There were already a lot of changes in December, something that has not been done in years, but it tells us where we were. Things are going to have to change and the owners are going to back it up."

Arteta has also made it his mission to integrate Arsenal's emerging talents from the academy into the first-team, with Bukayo Saka and Emile Smith Rowe establishing themselves as key figures in the squad this season.

While he admits there is a long way to go before Arsenal can catch up to Manchester City, Chelsea, Liverpool and Manchester United, Arteta is confident the work the club are doing now will pay off in the long term.

"Time is catching up right now," he said. "It's a trend, it's years now that this has been happening. If the distance and the margins with the rest become too big, then it's almost impossible to do it.

"We are still on time, and we have put some very strong pillars and foundations in the last few months to do what we have to do."

Arsenal's fans are losing faith in Arteta as results continue to deteriorate, with speculation now growing about his future, but when asked if he still backs himself to coach at a top club, he said: "Yes".

"We know what has been going on inside here for the last 18 months," Arteta, who won the FA Cup with Arsenal last summer, said. "We know. We only know, the ones that are here. How we have built that is incredible."