Everton's 25 years without silverware: No luck, little money and lack of belief... but Carlo Ancelotti can turn around fortunes

It's 25 years to the day since Everton last won a trophy. A silver anniversary of no silverware.

John Major was Prime Minister, Robson and Jerome topped the charts, Richarlison wasn't even born. 9,132 days later, Evertonians are still waiting for another day like that. A fanbase starved of success, but it wasn't always that way.

Growing up as a Blue in the '80s, I assumed we'd always be playing in finals and winning titles. I jumped on the bandwagon as a six-year-old in 1985, the club's finest hour as we won the League and European Cup Winners' Cup. Only a Norman Whiteside goal in extra-time in the FA Cup final denied us a treble. 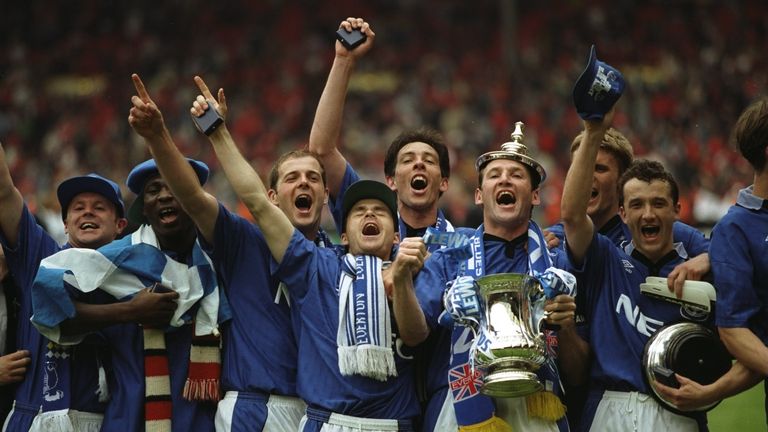 Everton's famous 1995 FA Cup win over Manchester United, revisited on its 25th anniversary by two men who made it possible, Paul Rideout and Graham Stuart.

A year later we were back at Wembley, beaten this time by Liverpool, my first taste of heart-breaking defeat to our biggest rivals. Yes, there have been one or two more since! Twelve months later, my dad took me to Goodison Park for the first time and we were champions again. You could call me a glory hunter. There's not been much glory since.

"It's very hard to accept as an ex-player and as a supporter that we haven't been close enough and won anything in 25 years," former striker Graham Stuart told Sky Sports.

He's now a club ambassador but played in the 1995 final and might've scored the winner too, had he not hit the bar from close-range. Thankfully, Paul Rideout was in the right place at the right time to head in the only goal of the game.

"There's not many of us that can do that, play a one-two off the bar for your strike partner! Paul set me up in the semi-final so it was only right I set him up in the final.

"I was only eight yards out, and in some respects I connected too well, they're the ones that if you scuff it they dribble into the bottom corner. It hit the underside of the bar but thankfully Paul saved my blushes. But at the time I didn't care, you've won an FA Cup final and that's all that matters."

Now based in the USA, Rideout's dined out on that goal ever since, even if most of the kids he coaches in Arizona have no knowledge of what he achieved before they were born.

"Sometimes they come in with their phones and their parents have looked me up, and they come and show me it and you talk to them about it.

"I have lived off it for 25 years and that's all thanks to Graham, he set it up. The sad part is my celebration afterwards, not knowing what to do, it was a sad celebration! But when you score at Wembley it's a special place."

For the record, Rideout's celebration consisted of running away to the Everton fans with two hands in the air before blowing a kiss. True, there was no Duncan Ferguson shirt-waving or Tim Cahill-esque corner flag boxing, but I've seen worse!

Everton have been back to Wembley for just one Cup final since, in 2009. Louis Saha scored after just 25 seconds, the fastest goal in an FA Cup final. I remember turning to my mate once the celebrations had calmed down and saying "we've scored too early".

A pessimism and 'it's bound to go wrong' attitude has developed over the years. Sadly, I was right. We lost 2-1. Leon Osman felt the pain more than most in the team that day, having been at the club since he was a lad. At the age of 14, he'd signed schoolboy terms in Joe Royle's office days before the 1995 final.

"I've not been able to look back on it and watch, it was just such a disappointing day in my career with the hype around it and you know what could be possible at the end of it".

It's that possibility, that opportunity for overnight hero status with the fans that awaits every Everton team at the start of each new season - can they be the ones to bring silverware back to Goodison?

Of course, qualifying for the Champions League - as they did under David Moyes in 2005 - would be a giant step forward and re-establish the club on the European football map but you can't put fourth place in the trophy cabinet.

So why have trophies eluded the club in an era when Leicester have won the Premier League with a squad assembled for just over £50m and Wigan, Swansea and Portsmouth have all won cups at Wembley?

"If it was as simple as one reason I'm pretty sure it would've been figured and changed," Osman told Sky Sports. "In the past, the club struggled for a bit of money, they were fighting for relegation for years rather than at the top of the table. And with all that came a lack of belief. We were getting to cup finals and semi-finals and we just lacked that real belief to get that first trophy won.

"To be an Evertonian and have Liverpool winning trophies is hard to take, knowing I was one of the people who could do something about it and for whatever reason was unable to do so. You feel the burden, you feel the disappointment and I hope as soon as possible this next generation of players can bring a trophy to Goodison Park."

Everton do have money now, thanks to the financial muscle of their billionaire major shareholder Farhad Moshiri. He has spent around £450m on players since his arrival in 2016 and yet in the three completed seasons since, Everton finished no higher than eighth in the Premier League and won just four cup ties, progressing no further than the fourth round.

So, is it really all about the money?

"It's luck at times," Osman added. "The season before 2009 Portsmouth had got to the final against Cardiff, but when we got to the semi-finals it was Chelsea, Manchester United and Arsenal. We got to the semis in 2012 and it was top four sides again. We just kept finding ourselves having that good run when the top sides were desperate to win trophies themselves that season."

But as Evertonians know only too well, we've been our own worst enemy at times too. You only have to go back to January to see that, when Jurgen Klopp put out the Liverpool kids in the FA Cup third round, but we still lost. The wait for a win at Anfield - another millstone around our neck - goes on. Twenty years and counting.

That defeat was just a few weeks into the reign of the latest manager brought in to try and bring the good times back to Goodison Park. With the club 16th in the table at the time, Carlo Ancelotti's appointment was seen as a major coup.

The dapper Italian is a silver-haired silverware specialist who's won trophies in five different countries (including England with Chelsea) and three Champions League titles - but is he the man to reignite Everton's fortunes? Two of the class of '95 certainly think so.

"We couldn't have anybody better than Carlo," Stuart told Sky Sports. "He knows how to put a good side together, he won't suffer fools, he commands respect but we've got to give him a bit of time."

"He reminds me a bit of Joe Royle in the way he's calm. I think he'll be great for the younger players. He's done it on and off the field at great big clubs, his reputation is superb so he's got the respect of the players straight away.

"I think he'll have the ability to bring in top players just because of his name. Everton is a huge club, it's a giant of a club, it doesn't matter how good or bad, the consistency of the fans is the same. I think it will go on to great things".