It has been a long summer transfer window for Everton in their search for a centre-back, but in signing Ben Godfrey, the club have recruited a potential gem.

Going back as far as March, before the coronavirus pandemic brought a halt to the 2019/20 season, the club were at an advanced stage in negotiations with Lille over the signing of Gabriel Magalhaes.

The club's director of football Marcel Brands felt he had made decisive steps in securing the Brazilian's services before the full force of the pandemic struck the continent.

The shifting financial climate altered the player's valuation in the eyes of the Ligue 1 club, and the early emergence of Everton's interest in the player was perceived as stoking up a bidding war among Europe's elite. Gabriel duly joined Arsenal for £27m in August and Everton were back at square one.

Everton have had to be patient this window, with three astute pieces of business following in quick succession: James Rodriguez joined for an undisclosed fee, shortly after the arrival of Allan from Napoli and just before Abdoulaye Doucoure completed his £20m switch from Watford.

Carlo Ancelotti has been able to address a key area of weakness in solidifying his midfield, but it has not been the only area in need of repair if Everton are to drastically improve upon the 12th-placed finish in the Premier League last term.

Having missed out on Gabriel, Chelsea duo Kurt Zouma and Fikayo Tomori were among those on a shortlist drawn up by the club's transfer committee - but with the window's deadline fast approaching, and Frank Lampard's reluctance to let either depart Stamford Bridge, Everton have looked elsewhere.

In signing Godfrey from Norwich, the promising England Under-21 centre-back joins Niels Nkounkou as part of the club's longer-term thinking. The 22-year-old - along with Max Aarons and Jamal Lewis - stood out for the Canaries despite their relegation last season, and there is plenty to suggest he can flourish at Goodison Park.

Godfrey is joining senior England international Michael Keane, in addition to the fast-maturing Mason Holgate, among Everton's defensive options. Ancelotti is assembling a squad for the here and now, but there is an undercurrent of a youthful English core, with Jonjoe Kenny acting as understudy to Seamus Coleman and Dominic Calvert-Lewin starring as the team's attacking focal point.

Jordan Pickford remains England No 1 so Ancelotti has targeted improved communication in his back line after witnessing his side concede 56 goals last season. Godfrey is far from the finished article, but his one-year experience in the Premier League will prove invaluable given Everton's current shortage of options at centre-back.

"It is an honour to sign for Everton and to be part of a huge club. I am very thankful for the opportunity and I can't wait to get started. The aim for me at Everton is to win trophies."

Everton would have had until October 16 to complete this transfer given the arrangement agreed for domestic transfers between Premier League and EFL clubs, but a lengthening injury list will have been a contributing factor to the club returning to Norwich with an improved bid after an initial offer was rejected.

Holgate is currently sidelined with a toe injury sustained in the pre-season friendly with Preston North End which could keep him out for at least another month. Jarrad Branthwaite is also on the treatment table after suffering an ankle injury in the Carabao Cup second-round win over Salford. Fellow youngster Lewis Gibson has been sent out on loan to Reading.

It means that Lucas Digne has been operating as a makeshift centre-half in the subsequent wins over Fleetwood and West Ham in the competition and Keane has featured in all six of Everton's games in all competitions to date.

Ancelotti has been keen to manage Yerry Mina's minutes given his fitness record last season, and so Godfrey's arrival comes as a timely boost. The numbers indicate just why Everton had to fend off competition from AC Milan and Bayer Leverkusen for the York-born defender.

The player's versatility is another appealing aspect of his make up. Speaking earlier on in his career, he said: "My footballing hero is actually Thierry Henry, although I don't score that many goals.

"I was a striker when I was a kid, up until about the age of 11 or 12. I liked his style of play and stuff like that and he obviously got plenty of goals."

During his teenage years, he operated as a midfielder for York City in League Two before he caught the attention of Norwich. A loan spell with Shrewsbury Town ensued where he featured on 51 occasions in helping his side reach the League One play-off final in 2018.

Back at Norwich, he has found his position at the heart of the defence, but Norwich boss Daniel Farke spoke glowingly about Godfrey's potential to operate as a centre-back in an interview with local newspaper The Pink'Un in August. 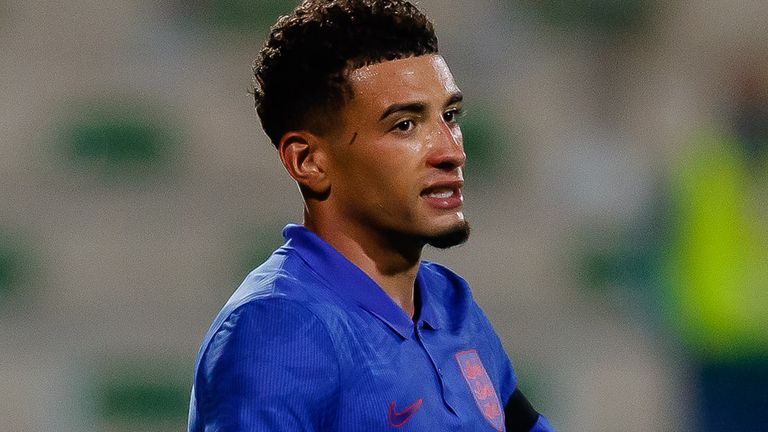 "Look at many world-class centre backs, they nearly all started in central midfield," he said. "Gerard Piqué in Spain, Mats Hummels and Jerome Boateng in Germany, even in England with Rio Ferdinand at the very start.

"I have the feeling when he gets used to this position and can have more games to learn the decision-making in the last row because it is different, he has all the ingredients to be an outstanding centre-back, world-class.

"He can have a great, great career. Maybe in the holding midfielder he can be a good Championship player, maybe higher, but I see him in training and in the cup games and pre-season and I see his mid to long term future in that position [centre-back]." 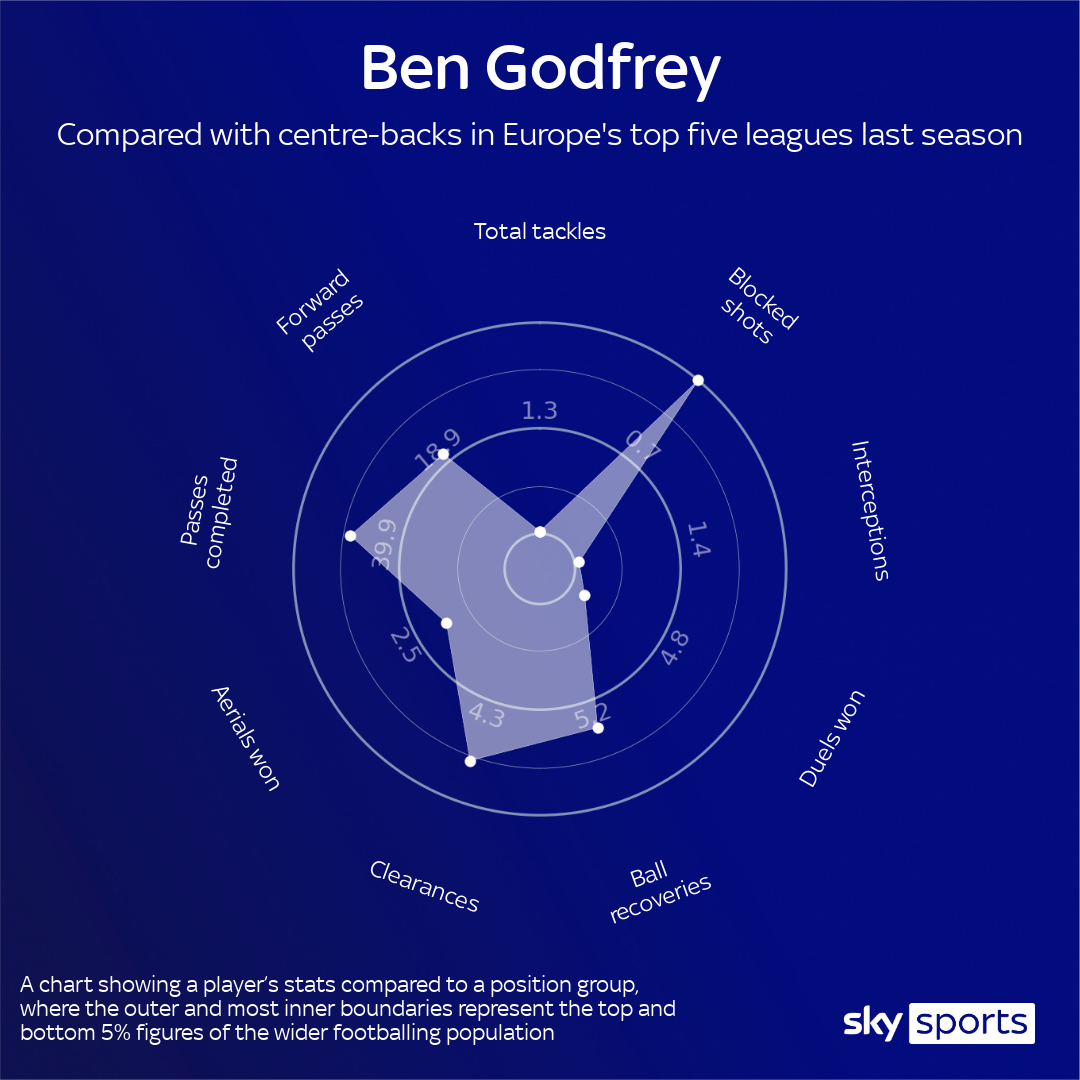 Not 23 until January, Godfrey has already amassed 118 senior league appearances. There is plenty of experience already on his young shoulders, and it is clear to see why he was tied him down to a five-year contract at Carrow Road only last summer amid interest from both Manchester clubs, Tottenham and Borussia Dortmund. While Norwich went on to concede 75 goals last term, the centre-back's impressive performances stood out.

For a side constantly under pressure, his rank of third in the league for blocked shots and 14th for headed clearances are to be expected, but the 127 times Godfrey regained possession in Norwich's defensive third indicates his strong reading of the game.

Farke stuck to his principles of being a possession-based team last season despite their struggles, ranking 10th both home and away in the division in this regard, so Godfrey is familiar playing out from the back in the style that suits Everton under Ancelotti.

It is what has drawn comparisons between the player and former Manchester United defender Rio Ferdinand - and Godfrey revealed in another interview with The Pink'Un last season that he views the 81-capped England international as a mentor.

"In terms of being a centre-back, there's not been a better person to speak to for advice in however many years," Godfrey said. "Anything he says, goes really. He's class and he helps me so much. He's got a lot of time for me. He's a top guy and it's good to speak to him.

"I will get my clips together after a game, send them to Rio and he'll come back and say: 'to be honest, I'd have done this or this…' or tell me what I've done well. I'm always trying to learn and improve and there's no one better to give me advice."

With Everton's first-choice partnership Mason Holgate and Michael Keane both preferring to operate on the right side of a central pairing, Godfrey's natural ability to feature on the left - as in Branthwaite's case - was another appealing facet that has led to his move to Merseyside.

Standing at 6ft 0in, Godfrey may be considered short for a Premier League centre-back, but his physicality helped him win 61 per cent of his aerial duels last season - and Everton will hope his arrival will improve upon an area of perceived weakness.

Excluding penalties, the Toffees (18) have conceded more goals from set-pieces than any other current Premier League side since the start of last season. Ironically, Norwich had the worst record for last campaign as Farke deployed a mixture of zonal and man-marking in the same way that Everton do under Ancelotti.

The hope is that with better players, Godfrey can learn to improve upon this key area in the coming years - in the same way that several members of the current squad have made strides during the Italian's nine months in charge.

With seven successive wins to start a season for the first time since the 1938/39 campaign, there is a wave of optimism around Goodison these days. Godfrey has all the necessary attributes to follow in the footsteps of his mentor Ferdinand, representing another sign of progress in Ancelotti's project at a new-look Everton. 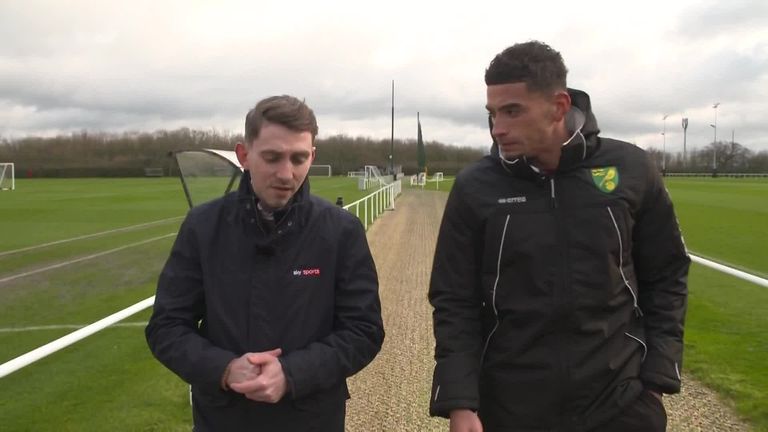 Ahead of his move to Everton, we revisited a previous interview with Ben Godfrey where he speaks of his future ambitions for club and country.

"It was an unconventional route for Ben Godfrey to the top of English football. There wasn't a Premier League academy with all the comforts that brings, rather a fight for survival in League Two. He was on the bench at York City at age 16 and tells of seeing players almost come to blows in the changing room as they scrapped for every point.

"The early exposure to men's football helped his maturity. His technical development grew during a loan spell at Shrewsbury in 2017/18. Godfrey played in midfield as well as at right-back and being pressed in "tight areas" helped him to become the modern ball-playing centre-back we saw at Norwich in the Premier League.

"He's always believed in his ability but told me last season that he'd learnt so much from Norwich's campaign in the Premier League. Playing for Everton may also help the 22-year-old realise his international ambition.

"He played at Wembley for Shrewsbury in the EFL Trophy final in 2018, he's also been to the national stadium to support York City on two occasions but the defender is eager to walk out at Wembley as a full international having captained England Under 21's. First things first though, Godfrey's task is to get into Carlo Ancelotti's team.