Everton loanee Moise Kean has scored 11 goals in 18 games for Paris Saint-Germain so far this season; Everton manager Carlo Ancelotti wants the forward to be "happy" and is willing to talk to PSG should the player want a permanent move; Pochettino wants to keep Kean at the Parc des Princes 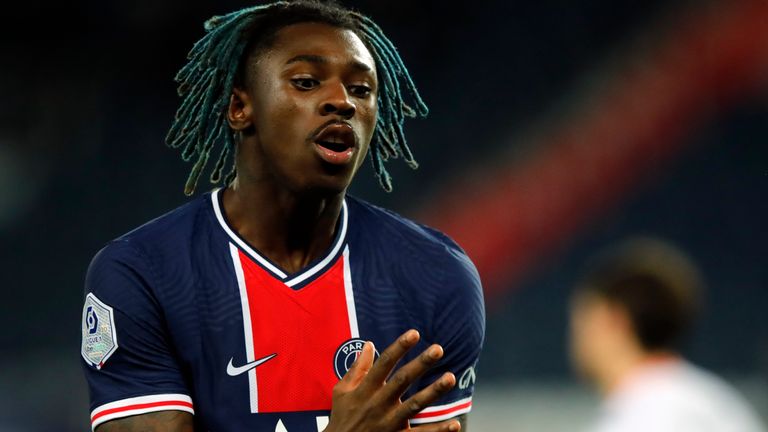 Carlo Ancelotti says Everton are willing to talk with Paris Saint-Germain about Moise Kean's future should the forward want to stay in France beyond his loan spell.

Kean joined PSG from Everton on a season-long loan in October, and earlier this month Sky Sports News reported the French champions are in negotiations to make the deal permanent for around £31m.

New manager Mauricio Pochettino is eager to keep the 20-year-old, who has scored 11 goals in 18 appearances in the Champions League and Ligue 1.

Everton are willing to consider making the move permanent, so long as they can recoup more than the £27m they paid Juventus in August 2019, and Ancelotti stressed it is important Kean is happy wherever he ends up next season.

"He is having a really good experience at Paris Saint-Germain," the Everton manager told Sky Sports News. "He is scoring a lot of goals, he shows his quality. He is our player and he will be back in June.

Following Ancelotti's comments, Pochettino has also confirmed he plans to hold talks over Kean's future and says he is in constant dialogue with the club's sporting director Leonardo about transfers this month.

Italy international Kean is thriving in the French capital, playing alongside Neymar and Kylian Mbappe, in contrast to his time at Goodison Park when he struggled to make a significant impression, scoring four goals in 37 appearances.

Last month he told reporters: "I have the opportunity to learn a lot from them. "They are two of the greatest players in the world. I am very happy to play with them. I learn a lot from these leaders."

Meanwhile, in light of Dominic Calvert-Lewin's hamstring injury, Ancelotti brushed off reports linking Everton with Bournemouth's Josh King, insisting he must focus on the players at his disposal.

When asked about King, he added: "I need to be focused on the players that I have, on Cenk (Tosun) who came back after an injury, to improve Anthony Gordon in front, to have Richarlison back, this is our thought in this moment.

"To replace Dominic Calvert-Lewin will not be easy but we have to adapt and we have to put confidence on the players that we have."