Ashley Cole joins Everton from Chelsea's academy, while he has also been assistant manager with England U21s; former defender played with Frank Lampard with Chelsea and England, while he also played under him at Derby; Lampard was appointed Everton boss on Monday

Everton have appointed Ashley Cole, a former team-mate of new Toffees manager Frank Lampard with Chelsea and England, as a first-team coach.

Lampard, who was appointed as Everton manager on Monday, told the club's website: "I'm delighted to add Ashley into my backroom team. Everyone knows about his superb playing career and what he has achieved in the game.

Paul Merson says Frank Lampard is the right fit for Everton and he thinks brighter days could be ahead for the Merseyside club with the former Chelsea boss at the helm...

"He is now a well-respected coach which has been recognised by his work with England U21s. He'll bring a wealth of enthusiasm, game-play experience and is a very good young coach who adds strength to our coaching staff."

Cole added: "I was thrilled when Frank asked me to join him at Everton. This is a brilliant opportunity with a fantastic club and I am coming here to work hard and try to help bring success to Everton.

"The chance to link up again with Frank was another huge draw. He is an excellent manager and leader. With the rest of the staff here, we have everything in place for what we want to achieve together."

Cole became a coach after finishing his playing career at Derby - where he was signed by Lampard - in the summer of 2019.

The 41-year-old followed Lampard - who was appointed Chelsea boss in July 2019 - to Stamford Bridge when he became an academy coach in October of that year.

Lampard has already brought in assistant manager Edwards from Chelsea, while first-team coach Clement was Carlo Ancelotti's assistant during his time as the Blues' manager from 2009-2011, when Lampard and Cole were players at Stamford Bridge.

Alli joins Everton: 'I want to be happy playing football'

In an exclusive interview with Sky Sports News after his move to Everton was confirmed late on Deadline Day, Dele Alli spoke of Lampard's influence in convincing him to move to Merseyside, where he hopes he can finally rekindle his joy for football after a difficult end to his time at Tottenham. 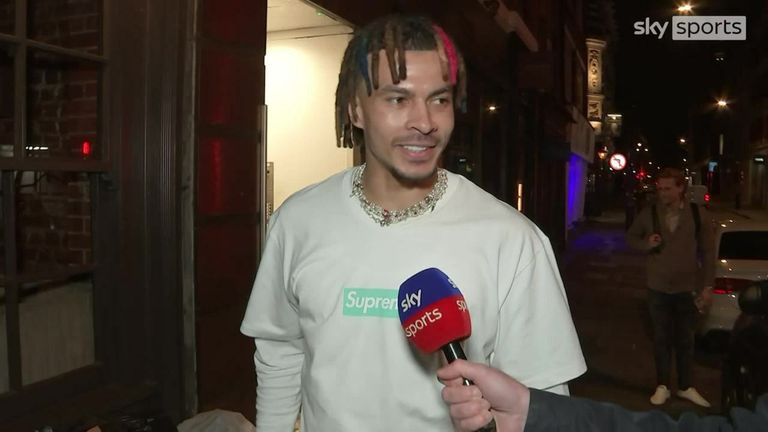 "I'm very excited, a bit tired from the long day but we got there in the end. I'm delighted," Alli said.

"I've had a few good conversations with him [Lampard] already. He's a player I admired through his whole career watching him - I'm pleased to work with him, it's very exciting. I'm sure we can do great things together.

"I just want to be happy playing football. Working with Lampard, and the great players Everton have got, is a great opportunity for me to do that. I'm excited to go there, show the fans what I can do and help the club as much as I can."

Donny van de Beek also cited new Everton boss Lampard as a key factor in his decision to join the club on loan from Manchester United on Deadline Day.

"I had a really positive meeting with the new coach," he said. "We have the same ideas about football and he had a lot of influence on my decision.

"I played against him when I was at Ajax, and he was at Chelsea [as manager], so he knows me as a player. He thinks I have qualities that can help the team. I can learn a lot from him because he was a little bit in the same position - a midfield player who scored a lot of goals.

"He can help me a lot, so I think I'm in a good spot. I want to improve with Everton. There are always things that can be better and I work hard every day to do that."

Van de Beek added: "I want to show my qualities, my strengths, to the people in England - but especially the fans from Everton."