Tanguy Ndombele to Tottenham: All you need to know about the £65m signing from Lyon

Ndombele had previously been linked with Manchester City, Manchester United and Juventus

By James Walker-Roberts and Nick Wright

Tottenham have signed Tanguy Ndombele in a club-record £65m deal - but what will he bring to the club?

The 22-year-old French international, who has been described as the "new Michael Essien" and enjoyed an impressive 2018/19 campaign with Lyon, has put pen to paper on a five-year contract at Spurs after undergoing a medical on Tuesday.

But what are his strengths and where will he fit in to Mauricio Pochettino's side? We take a look...

Considering he was reportedly turned down by several clubs as a youngster for being overweight, Ndombele's rise over the last few years has been rapid.

In 2015/16 he was playing in France's fifth tier with Amiens' reserve team. The following season he helped the Amiens first-team earn promotion into Ligue 1, then he moved to Lyon on an initial loan move at the start of the 2017/18 season.

The deal included an option to buy for eight million euros, which proved to be shrewd business from Lyon after an impressive debut season in the top flight.

Ndombele is a box-to-box midfielder who is powerful, forward-thinking and athletic - but also intelligent in possession.

His arrival at Lyon came in the same summer that Corentin Tolisso left for Bayern Munich. When he was presented as a Lyon player, Ndombele was asked about comparisons with Tolisso.

"We can have similar profiles," he said. "I also like [former Stoke and Porto midfielder Gianni] Imbula, but I do not have a particular model." Lyon president Jean-Michel Aulas described him as the "new Essien".

After his Lyon debut against Paris Saint-Germain, L'Equipe rated him 8/10 and gave him their man-of-the-match award, even though Lyon lost 2-0. "Ndombele, the phenomenon of Lyon," they wrote.

Ndombele started 28 Ligue 1 games in his first season with Lyon and that number rose to 31 in 2018/19. He was one of the standout performers as Lyon beat Manchester City in the Champions League and then drew in the reverse fixture, earning the Sky Sports man-of-the-match award in the 2-2 draw.

His displays against City showed his positive mindset as several times he turned away from trouble in midfield and then played a forward pass. He also carried the ball well and set up two clear chances at the Etihad with incisive passes through the defence.

"Lyon really has a very good team. There are young people full of quality and I think the team is in place tactically…They're one of the toughest teams I have ever faced," said City boss Pep Guardiola after the 2-2 draw in France.

Ndombele's former Amiens coach Christophe Pellissier sums up his qualities well: "He is very good with the ball, dazzles with his shot, breaks lines with the ball at his foot, his technical quality allows him to play more advanced, while his intelligence allows him to adopt a more defensive role."

If he sounds impressive already, it's worth remembering that he is only 22 so there is plenty of room for improvement.

Where can he improve?

Bruno Genesio, Lyon's head coach up until the end of last season, has described Ndombele as "thoughtful and intelligent" and "providing balance" to the team.

Genesio also said earlier this season that the midfielder needs to work on his finishing.

He knows how to do everything in the middle, he is powerful, technical.

"He has to go one last step in finishing, the only thing he needs to become a great player. He lacks some concentration in the final third but he has the technical quality to do it."

Ndombele's late winner in Lyon's 3-2 win over Nimes on the final day of last season was his first in 65 Ligue 1 appearances, showing the room for improvement in that regard, but his assists total underlines his creative ability. He also ranked third among Lyon players for key passes, with 47.

Ndombele was called up to the France squad for the first time in October, replacing Tolisso in the squad - the same player who he replaced at Lyon.

He came on as a substitute in matches against Iceland and Germany and then earned his first start later in the year against Uruguay.

France head coach Didier Deschamps said: "He knows how to do everything in the middle, he is powerful, technical."

Speaking before his call-up, Genesio had said that Ndombele has "international quality" and added: "Tanguy understands the demands of the highest level and gives himself the means to reach it."

The story of the deal - Lyall Thomas, Sky Sports News

'Spurs started scouting for Mousa Dembele's replacement during the 2017/18 season. We reported that Geoffrey Kondogbia and Matteo Guendouzi were among the players they were looking at, and towards the end of that season they were also watching Ndombele, who had burst onto the scene in France during his loan spell at Lyon from Amiens.

'Tottenham wanted to sign him last summer and we reported their interest then. We also reported interest from Manchester City, who had continued to track him. He was City's third-choice midfield target this summer.

'The money for the deal has come from Tottenham's Champions League earnings. We understand Pochettino has been given around 70 per cent of that windfall, which is in the region of £60m-£65m, before Spurs sell some players to accrue more funds to reinvest before the deadline.

'Daniel Levy handles all transfer deals at Tottenham and he was particularly well placed for this one. Despite Aulas once describing negotiations over the sale of Hugo Lloris as his "hardest in 25 years", he has a very good and respectful relationship with the Spurs chief. That would have helped get the deal towards the line.'

Where will he fit in at Spurs?

Ndombele would slot straight into central midfield at Tottenham, an area in which Pochettino's side have lacked depth since Dembele's departure to Chinese side Guanzhou R&G in January. 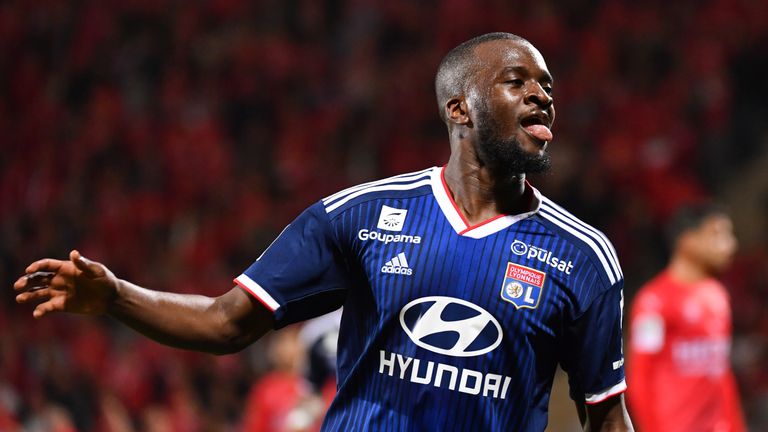 The 22-year-old could play at the base of the 4-2-3-1 formation commonly used by Pochettino, but he is also comfortable playing in other midfield roles and in other systems. That versatility was apparent at Lyon last season, with Genesio using eight different formations in Ligue 1.

Ndombele is tactically intelligent and, interestingly, he is also a similar kind of player to Dembele, who Pochettino once described as a "genius". Like the Belgian, Ndombele is an accomplished dribbler who is excellent at retaining possession and carrying the ball forward. Last season at Lyon, only Bertrand Traore averaged more successful dribbles per 90 minutes.

Ndombele's dribbling ability should add penetration and unpredictability to Tottenham's midfield. It's just one of the reasons why they were willing to shatter their transfer record in order to bring him in.