Daniel Levy: "We believe Jose will bring energy and belief to the dressing room"

Jose Mourinho has been named Tottenham head coach until the end of the 2023 season.

The former Manchester United and Chelsea boss replaces Mauricio Pochettino, who was sacked on Tuesday with the club 14th in the Premier League.

Negotiations between Spurs and Mourinho - who had been out of work since he was sacked by United in December - intensified over the last few days and concluded in the early hours of Wednesday morning.

Mourinho was promised funds to improve the squad in January and in the summer transfer window, if he felt necessary.

"I am excited to be joining a club with such a great heritage and such passionate supporters," said Mourinho. "The quality in both the squad and the academy excites me. Working with these players is what has attracted me."

He will take training at Hotspur Way on Wednesday ahead of his first game on Saturday - against West Ham at the London Stadium.

Levy said he was "reluctant" to sack Pochettino, whose Spurs side lost to Liverpool in last season's Champions League final, but explained the decision had to be made in the "club's best interests".

Mourinho won three Premier League titles with Chelsea, and is one of only three managers to have won the UEFA Champions League twice with two clubs, FC Porto in 2004 and Inter Milan in 2010.

"In Jose, we have one of the most successful managers in football," Levy said on Wednesday. 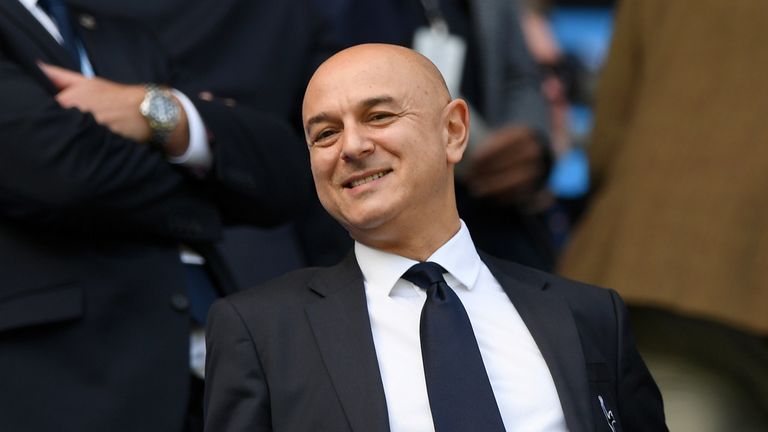 In Jose, we have one of the most successful managers in football.

"He has a wealth of experience, can inspire teams and is a great tactician. He has won honours at every club he has coached. We believe he will bring energy and belief to the dressing room."

Mourinho, who lives in London, had turned down job offers in China, Spain and Portugal since leaving United.

Joao Sacremento and Nuno Santos, who had been working as part of French club Lille's technical staff, have been added to Mourinho's backroom team for the first time.

They have been joined by fitness coach Carlos Lalin, tactical analyst Ricardo Formosinho and technical analyst Giovanni Cerra, all of whom have worked with Mourinho before.

The deal to take Mourinho to Tottenham was brokered by Israeli super-agent Pini Zahavi - the man who took Neymar to Paris Saint-Germain in a world record £200m deal.

Initial negotiations began between Levy and Zahavi following Tottenham's 1-1 draw at home to Watford over three weeks ago.

Those negotiations continued for more than a fortnight - and only in the last week have face-to-face talks between Levy and Mourinho taken place in London.

The Tottenham Hotspur Supporters' Trust have raised "concerns" about how Mourinho's relationship with the club's board will work, having called for clarity around transfers and wages when Mauricio Pochettino was sacked.

"The club must ensure they do not find themselves in the same position in two or three years’ time, and we need to hear from the executive board what the long-term thinking behind this appointment is, and how it sees its role."

Discussions centered around the present squad, the style of play Mourinho would adopt, and potential transfer budgets. While Mourinho believes the squad is strong, it is under-achieving. Funds will be made available if deemed necessary.

Relations between Levy, the board and their manager Pochettino had turned sour in recent months.

In particular, Pochettino's suggestion that he had planned to leave Tottenham if they had won the Champions League final in June was bad for the morale of the whole club, not just the players - and was seen as a big mistake.

Frustrations grew that Pochettino was being linked to Real Madrid and Manchester United, but never said 'this is my club; I want to stay here'. When results and performances continued to nosedive, the decision was taken to sack him.

Behind the scenes, Tottenham's board were becoming increasingly frustrated by Pochettino's demeanour. Levy felt that his manager had been given the players he wanted. However, at times, he felt the atmosphere at Spurs' training ground was toxic. Pochettino was unhappy and that had a significant effect on players and staff.

Tottenham's defeat at home to Newcastle raised huge concerns within the club hierarchy. His relations with a number of key players appeared damaged. This, combined with worsening results, led Levy to decide he needed to act.

Mourinho, who has been working as a Sky Sports pundit, will bring a "pragmatic approach" at Tottenham, according to his recent colleague Graeme Souness, which will bring silverware too.

"I have crossed swords with Jose many times in my career as a football pundit, recently I have got to work with him and his knowledge is exceptional, he understands our game," Souness told Sky Sports News.

"He has won trophies wherever he's been and I would expect him to do the same at Spurs. They've won something like two trophies in 28 years, for a big club, that's just not good enough.

"They need someone who can turn what is perceived to be attacking attractive football into a slightly more pragmatic approach that will put some silverware in the boardroom. He is a perfect fit for them."

"If Jose wants to get into top-level management, you've only got to look at his CV," he told Sky Sports News. "People question the Manchester United job, but his career as a whole has been hugely successful, and that's one thing Tottenham have lacked at the moment.

"As well as Pochettino has done, they haven't quite got over the line to get a trophy, and that's what Jose Mourinho does when he goes to a club."

"Is he the right fit for Tottenham? It's interesting, as Jose likes to spend money, and Daniel doesn't, and Jose would want to get some really big names into the building," explained Redknapp.

"He likes experience, and isn't really one for playing young players, but you can't argue with what he's done in the game."

Analysis: Levy and Mourinho gamble on each other

Tottenham chairman Daniel Levy and new head coach Jose Mourinho have put their reputations on the line. It's high stakes and high risk. But will it pay off?

Levy has turned away from Tottenham's traditional style for a manager who will do anything it takes to win. Pochettino's football philosophy, which has shaped the club for the past five years and built on Spurs' history of attractive, attacking football, has been traded in for a manager who will park the bus and play pragmatically if that's what it takes to get over the line.

That transition - which Mourinho will begin instilling from his very first training session on Wednesday afternoon - will be a seismic shift for the Spurs players.

But Levy has also put Spurs at risk of being dragged into the dramas and controversies that dogged Mourinho's final months at Manchester United. The press conference protests, the player disputes, the training ground spats, and eventually the toxic mood which divided supporters and made Mourinho's departure from his dream job inevitable.

But Mourinho has rolled the dice too. He's grabbed a Premier League return but takes over a squad of players at the end of a cycle. There are wantaways who have contracts expiring and eyes on moves elsewhere. There are others who need reinvigorating and to be challenged. And there are several areas on the pitch that need upgrading, with right-back and central midfield in particular need of attention.

Mourinho will have to address these issues without the financial backing in the transfer market he has had at his previous clubs.

Follow live coverage of Mourinho's return to management at Tottenham throughout the day on Sky Sports News.

We'll bring you a special programme - 'Mourinho's back' - from 6pm this evening right here on Sky Sports News.