Jose Mourinho: Tottenham need to do better than my first nine games in charge

Jose Mourinho insists his team need to do better than the excellent nine-game run that opened his Tottenham career, if they hope to qualify for the Champions League next season.

Spurs picked up 16 points from a possible 27 when Mourinho replaced Mauricio Pochettino in the Autumn - second only to league-leaders Liverpool in that time - but they now need to claw back seven in nine games to catch fourth-placed Chelsea.

Fifth in the Premier League is also expected to qualify for the Champions League due to Manchester City's European ban, pending appeal, but for that, they need to make up five points on Manchester United, who they play live on Sky Sports on Friday Night Football.

"I don't think a similar run to the first nine games will be enough," Mourinho told Sky Sports News. "At the moment we need more than that because we lost too many points and put ourselves in a difficult position.

"It's a difficult fight. I don't think we can lose too many points, unless our four or five direct opponents lose lots of points."

Spurs endured a poor run before the league was suspended, in part due to a string of injuries to key players, who have now recovered, and Mourinho believes three months of lockdown has brought the squad closer together.

"It was a strange opportunity to be close to each other, and feel empathy," he said. "At that mental level, to be together, to feel together - it was really nice.

"From a mental point of view, the boys are fine. Of course, we love football, so we are so happy to play." 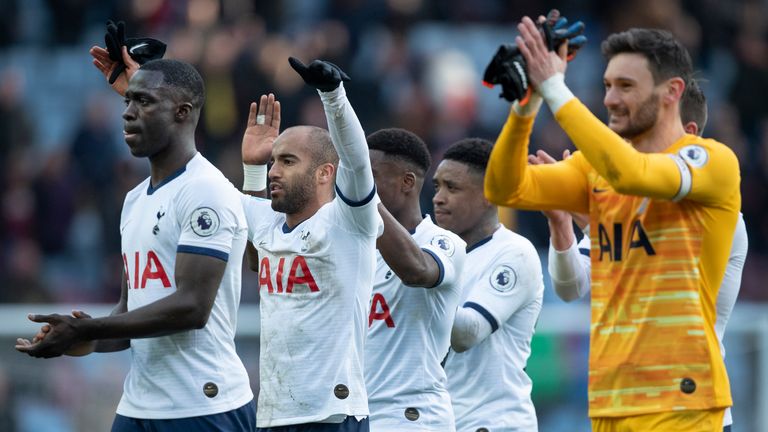 I am really proud of my boys, we have an amazing dressing room with amazing people.

Jose was happy to watch others play again too. So which sound option did he pick for Wednesday night's matches? Augmented crowd noise or the natural sound of silence? Neither. He had the volume on mute.

"When I watch football on TV, it's always without sound, so it makes no difference to me. I want to focus on the game and read the game myself and not to listen."

A return to action with a win against his last club would make all that work worthwhile.

Meanwhile, he will let the Tottenham players decide whether or not to take a knee before kick-off at the Tottenham Hotspur stadium, in support of the Black Lives Matter movement.

"You don't need to take a knee to be completely in solidarity with the movement. Your heart is much more important," he said. "The players must feel free to express themselves.

"I am really proud of my boys, we have an amazing dressing room with amazing people, with the right principles. People from different backgrounds, race, religion, living so happily together.

"What they decide to do before the match is up to them. I know what is in their hearts."

Mourinho will come up against his former player Marcus Rashford, who he praised for showing maturity in leading a campaign to have the government restore the free school meals voucher scheme across the country throughout the summer.

He said: "Marcus had this huge social impact, but there are dozens and dozens of players who showed principles by supporting many different causes during this period and I think by doing the right things, you show maturity and you need maturity to play football at the highest level. So I think when you do the right thing the focus doesn't go".

Does Jose need to change his style?

Speaking on the Football Show earlier this month, Paul Merson claimed that Tottenham are still "a million miles away" from competing with Liverpool and Manchester City for the Premier League title - a prospect that would require Mourinho to adapt his management style and personnel.

"He's got to show his hand a little bit more," Merson told Sky Sports. "At Chelsea, it was 1-0, 2-0 and even if it was 2-0 at half time against a lesser opponent, you always thought that was the end of the game. They weren't going to go on and win six or 7-0, they were going to shut up shop.

"He'd rather win 2-0 than 6-2 in an end-to-end game and really entertain the crowd. The game has moved on. I think the game moves on every single year, and you need to score goals. Teams make opportunities now, even the lesser teams in the league are having a go.

"It's a difficult, difficult balance to get right and I don't think Mourinho has the players at the moment. He had top drawer players at Chelsea, who would run through a brick wall for him.

"He's a million miles away from being a winner now. When you've got two special teams at the moment like Liverpool and Man City, it's very, very difficult.

"These two teams have made good teams look average and this is the problem. At the moment, you are looking at it and thinking, who is going to catch Manchester City and Liverpool next year? It would have to be some turnaround to catch these two."