Jose Mourinho has once again defended his team selections and asked why other managers like Frank Lampard and Jurgen Klopp are not questioned on the same choices.

The Tottenham manager has often been quizzed on Tanguy Ndombele's lack of starts with the club record signing in and out of the team since his arrival in July, missing out again on Wednesday through injury when Tottenham won at Newcastle.

Steven Bergwijn was the latest player Mourinho was asked about - having made an instant impact when he came on to assist Harry Kane's first goal - but turned defensive when questioned about what the winger has to do to make the starting XI. 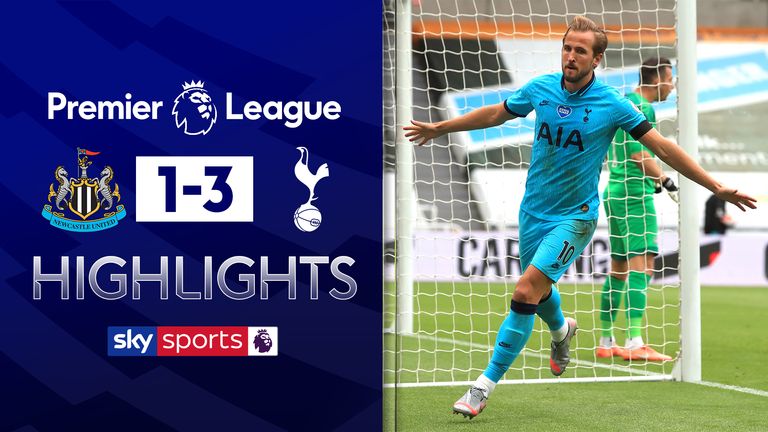 He said: "Look, that is a question you normally do to me but you do not do to Frank Lampard, to Jurgen Klopp, to Pep [Guardiola], to all the coaches of the big clubs with big players.

"Frank Lampard plays [Christian] Pulisic, you don't ask him why he doesn't start [Callum] Hudson-Odoi or something. When Pep Guardiola plays someone and Bernardo Silva is on the bench, you never ask about Bernardo Silva.

"How many times has Nuno [Espirito Santo] left [Adama] Traore on the bench to win matches in the last 30 minutes. You don't ask Nuno why Traore is on the bench and why he's playing [Diogo] Jota or [Daniel] Podence or [Leander] Dendoncker. It's just me.

"So he doesn't have to do anything else, he's a team player. He plays for Tottenham and if Tottenham wants to try and compete against the best teams, Tottenham cannot have 11 good players, they need more and we'll have them on the bench."

'We needed another automatic reaction'

Tottenham produced another quick response to conceding on Wednesday, with Harry Kane scoring the first of his two goals shortly after Matt Ritchie's impressive equaliser.

Mourinho noted the similarities, saying: "Against Arsenal, it was a bit of the same. We conceded and after that, the reaction was automatic and I think it's what you need.

"I don't like to hide things from the players, I try to always be very honest with them even if it's something they don't like, and I am a great motivator but I told them 'I know you are tired and I know you only have energy in your brain, not in your legs. Your body is dead, but your brain is not and it is there you have to go and get your energy' and I think the players were fantastic in this.

"I am so happy that no injuries are coming because it wouldn't be a surprise for me with the players who are playing almost every minute of every game. 12 more days then finally they have a holiday and hopefully we manage to get a Europa League spot.

"It was the fourth match with two days in between and to manage to do 10 points in these four matches is what keeps us in the fight [for the Europa League]."

Kane notched up his 200th club career goal in the victory, and took to Twitter after the game saying it was 'on to the next 200'.

Speaking about the striker, Mourinho added: "He's a young guy. If you feel 200 goals at this age with the remaining years he has in front of him, it is very normal that he speaks about going for 200 more. He is a fantastic player, a top goalscorer, he's young and he has a lot in front of him. So I'm with him, let's go for 200 more."

Bruce: We're down to the bare bones Newcastle have struggled with injuries throughout the season and picked up two more against Tottenham, with Fabian Schar dislocating his shoulder and the influential Allan Saint-Maximin also injured with the final kick of the game.

Steve Bruce also confirmed that Jamaal Lascelles has undergone an ankle operation and says his squad is down to the bare bones for the final two games of the season.

In his post-match press conference, he said: "That's the problem we face as well with the turnaround being so quick, we've got to even look at being ready for next season.

"Fabian Schar has gone away to hospital with what we think is a dislocation of the shoulder, Jamaal Lascelles had an operation on his ankle yesterday so in that respect, it's been very difficult. We think [Saint-Maximin's] nicked his calf so that's a problem too.

"We're down to the bare bones and to have eight or nine people missing is awful."

When asked if some of the injury worries is down to the number of games in a short space of times, Bruce answered: "Certainly it benefits the bigger team who can make five or six changes and the strength doesn't change.

"We haven't got that luxury just yet but when Schar goes over and unfortunately dislocates his shoulder, and arguably the two fittest boys on our books, Sean Longstaff and Isaac Hayden nick a hamstring, then it's a consequence of players playing tired and not recovering enough.

"It's a frustration but we knew that the schedule was hectic so we'll batten down the hatches and try and finish as high as we can."