Jose Mourinho: The new Tottenham stadium can become a fortress

Mourinho opens up on relationship with "the boss" Roy Hodgson; Watch Crystal Palace v Tottenham on Sky Sports on Sunday with kick-off at 4pm 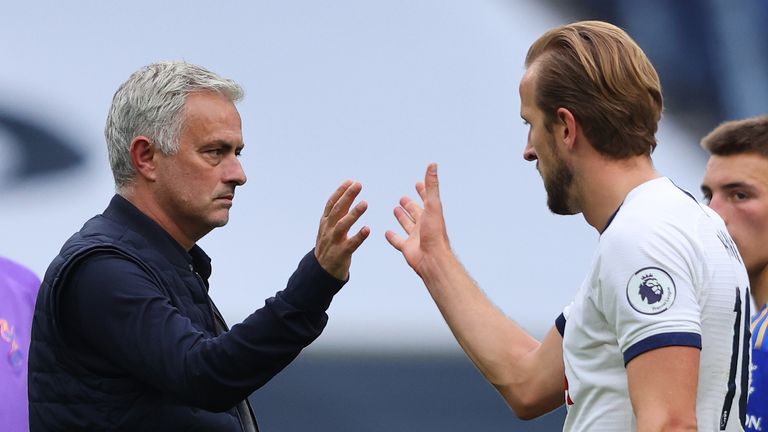 Jose Mourinho says Tottenham have been going in the right direction since the lockdown, and wishes there were a few more games to chase the top four

Jose Mourinho knows all about turning stadiums into fortresses. For nine years and 150 matches he remained unbeaten at home. He went 77 games without defeat across two spells at Chelsea.

Now, since football started again after lockdown, he's gone unbeaten at the Tottenham Hotspur Stadium. Five games, four of them wins. It's a long way from those heady days at Stamford Bridge, the San Siro and the Bernabeu, but it's a start.

So he is optimistic on Spurs' chances of turning their home into a fortress.

"I think so," said Mourinho. "But we need to do it with the fans. Without them you can create a kind of fortress, but based on the tactical side of the game.

"But, I think with fans, you can do it in a much stronger way because you add the emotional side of the game that only your fans in your stadium can give to you."

As Liverpool end another Premier League season unbeaten at home - they've now gone 59 without defeat - Jurgen Klopp has Mourinho's tally in his sights, and getting there won't be easy.

"I think the Premier League is getting into a direction where these unbeaten records are something more and more difficult to achieve because of the level of the teams," said the Portuguese.

"But to be strong at home and to arrive at the end of each season with an important number of points in your pocket from home matches is very important.

"I think our recent results at home without the fans are important, but we need them back. I can imagine that victory against Arsenal with the stadium full of Tottenham fans. This is the kind of empathy that you can create step by step."

On Sunday, of course, Spurs are away, at Selhurst Park. After that, it's a chance for the players to have a brief break. Brief enough, but not as brief as other clubs.

Clubs like Manchester City, Manchester United and Wolves could be playing for up to another month, depending on their progress in Europe. Mourinho isn't sure whether that's a disadvantage or not.

"If they are going to get a few days [holiday] and then go again immediately, probably they have better conditions to start the season stronger than people with holiday and a pre- season that is not going to be a pre-season," he says.

"Because between the second and third week of pre-season there are international fixtures, so I cannot consider it a pre-season for me. I'm going to have the players for ten days or so, then they go to their national team and then come back the week of Premier League day one.

"So I don't know who has the advantage. Teams that keep playing or teams that have a break. I really don't know."

Mourinho says that having an international break even before a ball is kicked in the Premier League next season is "crazy", but he understands why.

"It goes against every training methodology to have this little pre-season interrupted by players going to their national teams. But honestly it has to be done and I accept it.

"So what we felt with Covid-19 [compared to] what we are feeling now, they didn't have what we have now. When was their last match? So, they need to work.

"They have lots of people who work in the federations. They need income. They need to play. So, I have to say it's difficult for me as a club coach, but I have to accept and understand."

So, sympathy for the FA and Gareth Southgate, and admiration for a former England manager. Roy Hodgson will be in the adjoining technical area on Sunday - and Jose calls him "the boss".

"In the end there is always a boss," he says. "Sir Alex was our boss for many years, now Roy is our boss. It's a way to show respect to the one who has more experience and is in the league for a long time.

"I think especially for the younger people [it's good] to look at the top of the building and say: 'He is the boss. He is the one'. And I think we should all respect that.

"I like him a lot. I admire him. I had a great relationship with him when he was the England manager and I am so happy that for another season he has reached his objectives and that next season he will be there again to be our boss.

"He's a great person, it's incredible. He has respect for everybody, so I think 'the boss' fits him perfectly."

Mourinho is 15 years younger than Hodgson, and wants to be around for just as long. And, it seems, he wants to do it in the Premier League.

"I know myself very well and I know what I want from my life. I know what football means for me, so there will arrive a time when I'm going to be 'the boss'."