The 23-year-old, who impressed on loan at Sevilla last season, is in talks with Spurs

Tottenham look to have beaten Manchester United in the race to sign Real Madrid left-back Sergio Reguilon, but what makes him so special?

The 23-year-old, who impressed on loan at Sevilla last season, is in talks with Spurs, having previously been linked with Manchester United, Chelsea and Everton.

So, what sort of a full-back is Reguilon? Where will he fit in? And how did Spurs seemingly come out on top?

As expected, Real Madrid have played hard-ball over Reguilon, voted the best La Liga left-back in the 2019/20 season, and the deal could end up with future benefits for the La Liga champions.

According to reports, Manchester United were keen on Reguilon, but were unwilling to agree on three key aspects of the deal - a Madrid buy-back clause of around 40m euros, a preemption clause which would prompt United to contact Real if anyone made a future bid for the player, and the fee of 30m euros.

Tottenham are seemingly happy with the clauses, and therefore Reguilon looks to be on his way to north London. Real have three full-backs on their books and need to sell, but with a view to re-signing him in the future, this deal makes sense for all concerned.

"This has gone under the radar with the developments of Gareth Bale," Sky Sports News reporter Paul Gilmour told 'The Transfer Show.' "Reguilon is closing on a move to Spurs. Talks are progressing very well. We aren't quite there yet, but it's progressing well. One of the parts of the deal is a buyback clause which is something Man Utd aren't interested in."

As reported on Sky Sports in early August, Chelsea were in the race for Reguilon before they signed Ben Chilwell from Leicester, while Everton also bid £18m for the Real academy product.

Reguilon, at Real Madrid since the age of eight, was coached by Zinedine Zidane during his early years in charge of Castilla, Real's B team, with two separate year-long loans at Logrones in Spain's third tier between 2015 and 2017.

He got his chance in the Real first team in October 2018 due to an injury to Marcelo, and played 22 times in all competitions as Real went through managers at will in Julen Lopetegui and Santiago Solari before landing on Zidane again.

But his performances in 2018/19 weren't enough to get a starting spot under Zidane, who brought in Ferland Mendy to compete with Marcelo, meaning Reguilon moved to Sevilla on loan for the 2019/20 season.

It turned out to be a sound move for the defender, playing 38 times in all competitions under former Real boss Lopetegui as they won the Europa League again and qualified for this season's Champions League. 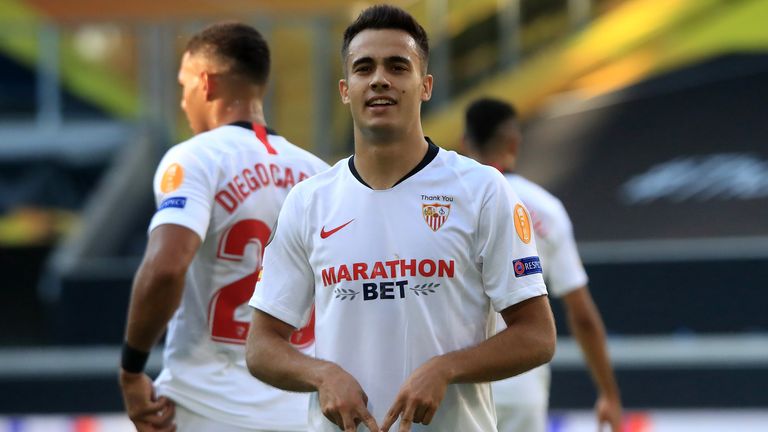 Though the focus on modern-day full-backs may sway towards attack over defence, Reguilon may be required to perform both tasks in equal measure under Jose Mourinho.

But there is little doubt Reguilon impressed most in the opposition's half last season. An energetic, almost frantic full-back, Reguilon's trademark is to gallop into the area from deep, rather than cross early.

He is not afraid to take on defenders, and registered 1.6 successful dribbles per game last season, the fourth-highest of all La Liga defender playing over 10 games.

Reguilon also registered 1.3 key passes per game, the fifth-highest of all La Liga defenders, and had five assists in all competitions, plus an assist on his Spain debut against Ukraine this month.

But his fearlessness in an attacking sense brings its concerns - only four defenders in La Liga lost possession more often than Reguilon - but with under 50 top-flight games under his belt, there is coaching potential.

The arrival of Reugilon - whose strength lies in attack before defence - may spell an end to Mourinho's lop-sided defence, which had up to now focused on loading the wide right area.

Matt Doherty's debut on the right of Spurs' four-man defence on Super Sunday against Everton showed promise in an attacking sense, but the former Wolves man left gaps behind him for Toby Alderweireld to cover.

If Reguilon joins, Spurs could attack with symmetry in the full-backs, or could move to a five-man defence to cover the attacking wide men.

"Reguilon has grown at a barbaric rate. He's a much more complete player than when he first joined. Hopefully he can continue with us." - Julen Lopetegui, Sevilla manager, August 2020

"When he arrived we laughed at him because he seemed like a bit of a simpleton. Now he sends us boots and tickets, after displacing the best left-back of the last decade." - Anonymous former team-mate at UD Logrones, via Marca, 2019

"People in Real Madrid love me quite a lot and that's something I value. It was a bit sad [leaving on loan to Sevilla] but I know that one day I will be able to succeed there. It's a lot tougher because there's a lot of competition. It's not usual that a player from the academy gets to play for the first team and it's even tougher for them to stay for the long term. I hope to be there some day." - Reguilon, July 2019