Harry Kane was left out of Tottenham's squad which faced Manchester City on Sunday; England captain is expected to train with Spurs team-mates for first time this season on Tuesday; City tabled a £100m bid for Kane earlier this summer which was rejected 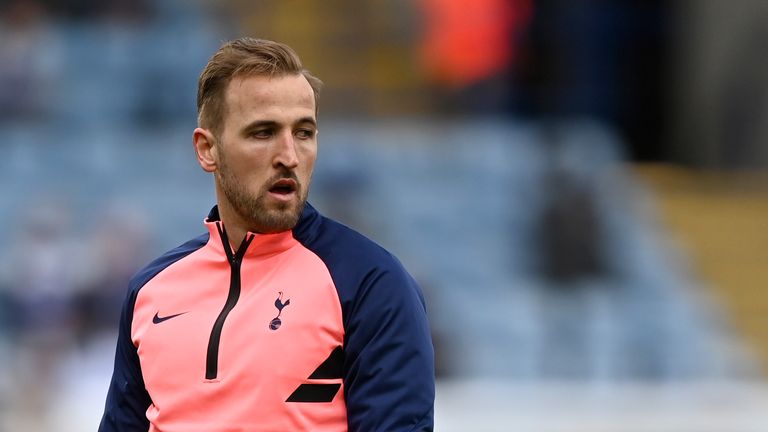 Harry Kane is expected to train with his Tottenham team-mates for the first time this season on Tuesday as speculation continues to mount over his future at the club, reports Michael Bridge

Harry Kane has been included in Tottenham's 25-man squad for their Europa Conference League play-off tie at Pacos de Ferreira on Thursday.

The forward was omitted from Nuno Espirito Santo's squad which defeated Manchester City 1-0 on Sunday, amid speculation over his future.

Kane did not take part in full training with his Spurs team-mates on Friday or Saturday, two sessions which were focused on match preparation for their Premier League opener.

Monday is a day off for the squad but Kane is doing individual work at the training ground in Enfield, and he is expected to train with his team-mates on Tuesday for the first time since his holiday.

Tanguy Ndombele and Serge Aurier are not included in the squad which will travel to Portugal.

Kane was subject to a £100m bid from City earlier this summer, which was rejected by Tottenham, and the Premier League champions remain eager to sign the England captain during the transfer window.

The 28-year-old's omission from Nuno's matchday squad for their win over Pep Guardiola's side has intensified talk surrounding a potential exit from the club this summer.

As per UEFA rules, if Kane plays for Tottenham in Thursday's game, he will still be able to play for any team in the Champions League from the group stage onwards this season.

When questioned in his post-match interview about Kane's absence for their first game of the season, Nuno said: "Harry is one of the best players in the world, so we are very lucky to have him.

"He has to get ready and help the team. We still have to go to Portugal and then we think about Wolves [on Sunday].

"Harry worked this morning, is preparing himself and when he is ready he will join the group and help the team."

Tottenham will desperately want to keep Harry Kane but uncertainty over his future must be resolved quickly, according to Sue Smith and Stephen Warnock

Kane believes he has a gentleman's agreement with chairman Daniel Levy to depart his boyhood club after reiterating his desire to leave earlier this year, but Levy has hinted that a deal could be difficult to do, with the striker still under contract until the summer of 2024.

He was last season's top scorer in the Premier League with 23 goals, and the Spurs striker has found the net 221 times in 336 games for the club in all competitions.

New signing Cristian Romero came off the bench during the victory over City, while Bryan Gil and Pierluigi Gollini were unused substitutes.

Pacos de Ferreira were fifth in the Portuguese top-flight last season and the two sides' reverse fixture in the Europa Conference League at the Tottenham Hotspur Stadium will be played on August 26.