Sergio Reguilon and Bryan Gil exclusive: The Spanish connection seeking to get Tottenham back on track

In an exclusive Sky Sports interview, Tottenham's Spanish duo Sergio Reguilon and Bryan Gil reflect on the start made by Nuno Espirito Santo, similar pathways to the Premier League and playing alongside Harry Kane

It was a touch of genius, drawing gasps from those hardened souls still healing from the debacle at Arsenal.

Mura's Zan Karnicnik is perhaps still wondering how it happened. The right-back looked odds-on to regain possession from Pierluigi Gollini's long ball, but Bryan Gil already had a picture in his head.

What he did next offered another ray of light at the end of a bleak month for Tottenham, producing an outrageous deft touch with his right foot to evade his marker down the left flank.

There will be far more glamorous fixtures ahead, Spurs will hope, but Gil is more than happy to turn the toil of these early Europa Conference League group matches against inferior opposition into an entertaining watch. The 20-year-old's stock continues to rise with each passing appearance.

Nuno Espirito Santo's preference to ease him in slowly was understandable given Gil's presence at the rescheduled Olympic Games in Tokyo, but there is now a clamour among supporters for a first Premier League start in this weekend's home clash with Aston Villa.

"The fans have made me feel really at home since day one," Gil exclusively tells Sky Sports. "I feel the belief they have in me and this is helping me to settle in.

"Being named on the bench for the opening day win over Manchester City, it was like no other experience I've ever had in football. The atmosphere inside the ground was unbelievable. I was bowled over by the noise and the stadium itself and it made me realise the size of this club."

It was a summer of transition at Tottenham, and while the future of one particular individual dominated the headlines to emerge from Hotspur Way, it was the arrival of the young Spanish starlet dubbed the 'Little Cruyff' that had fans filled with excitement.

Gil certainly has an air of the great Dutchman, not just from his appearance but in the way he glides around the pitch. The old-fashioned left-winger with flowing locks excelled within a struggling team last season when out on loan from Sevilla at Eibar. 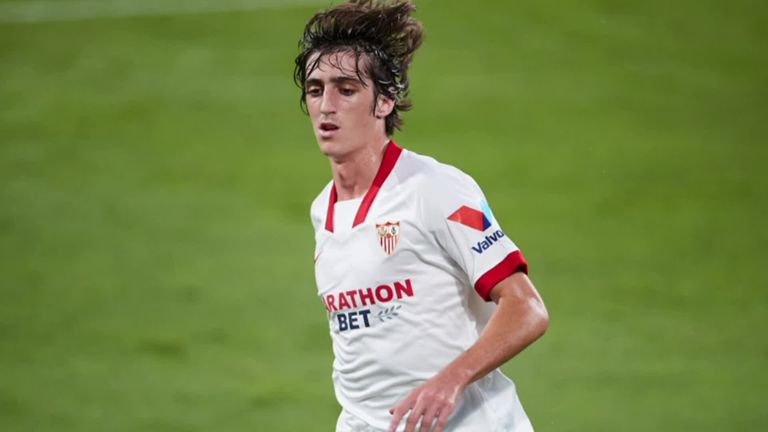 Speaking to Sky Sports at the time of his transfer to Spurs, Spanish football expert Terry Gibson described Gil as "one of the most talked about players in La Liga and one of my favourite players".

Despite only featuring in 50 minutes in the Premier League to date, his Carabao Cup and Europa Conference League appearances have demonstrated just why the youngster has gained instant recognition among his new following.

Gil is one half of a Spanish double act, and his countryman Sergio Reguilon has been listening intently to our early exchanges like a protective older brother.

The pair are already good friends having previously played together, albeit briefly, at Sevilla during the first half of the 2019/20 season when Reguilon was on loan from Real Madrid.

When Spurs announced Gil's arrival last July on social media, there was a cheeky reference to 'Agent Sergio', but the left-back played down his influence in negotiations with Sevilla.

"I didn't need to do too much convincing," Reguilon says when asked about his role in the player-plus-cash swap deal involving Erik Lamela and £21.6m in the summer transfer window.

"We were together in Ibiza during the summer. We spoke a lot about the club and I told him about why I thought coming to Spurs would be a good move. 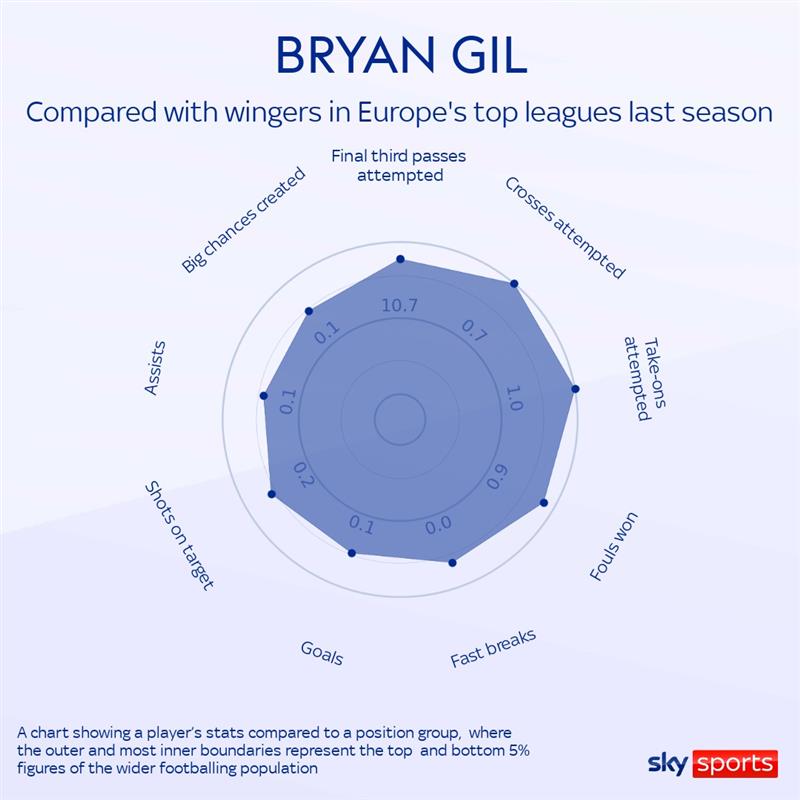 "Clearly, it was something that still needed to be agreed between all parties involved. Thankfully, Spurs also saw the merit in signing him and what he could bring to the team.

"Bryan would get in touch with me throughout the summer asking me more questions about Tottenham and I'm glad it was sorted out. We've already seen in a short space of time his qualities with the ball.

"He runs, he fights and he's already an important part of our plans moving forward."

Reguilon makes a quip about his team-mate's culinary skills and the pair are known to be avid video gamers, joining an impressive cast of professional athletes in their passion for Fortnite and the FIFA series, which launched its latest edition on Friday - much to their delight.

"When I'm not with my family, I'm always with him," says Reguilon. "If we're not playing video games we'll have a game of ping pong. We're just competitive in everything we do. We live very close to each other so it's very easy to find yourself spending time together."

Gil adds: "Regui certainly has helped me adapt to my new home. The club and my other team-mates have helped make the transition a lot easier.

"Regui has been here for a year already but I'm slowly trying to learn English (he says with a knowing glance across the table). I understand pretty much everything that's said but after just a couple of months here, I know it'll take time before I feel confident in my speaking."

Gil is not yet the finished article. In a conversation with head coach Nuno ahead of his summer move, he was told to gain some weight in order to meet the physical demands of the Premier League.

But after witnessing his team-mates being overrun and embarrassed in the first half against Arsenal last Sunday, his 20-minute cameo showcased a naturally gifted footballer whose technique and balance will provide vital components of the rebuilding job.

Those who remained inside the Emirates until the very end saw glimpses of what could become a familiar partnership down the left side, comprised of a distinct Spanish flavour. 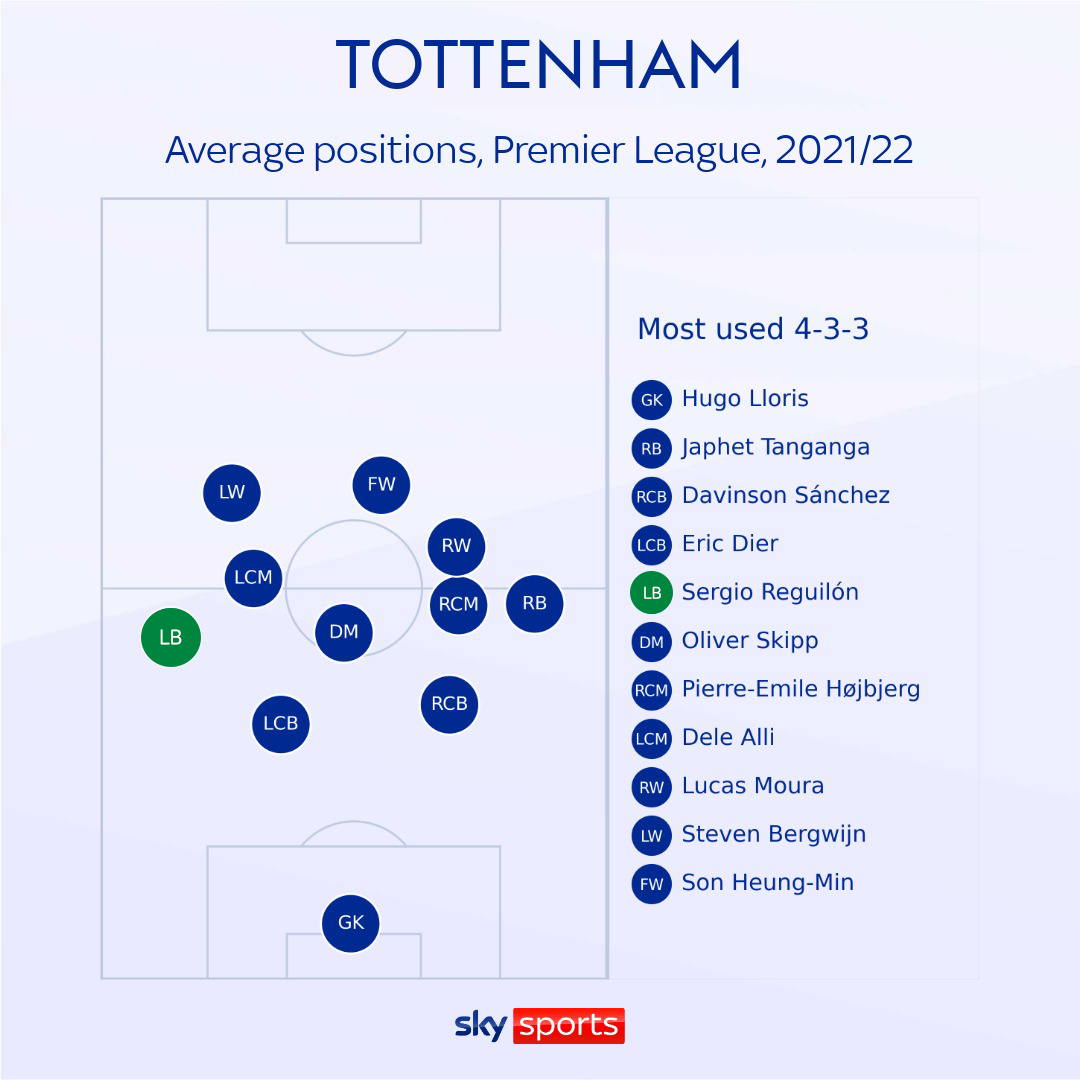 It was Gil who wrestled back the ball from his own misplaced pass to feed Reguilon in space before his cut-back was converted by Heung-Min Son. It was nothing more than a consolation but Spurs will hope it is the first of many goals scored as a result of their blossoming relationship.

"Let's hope it is," Gil says with a smile. "The more we play together, the greater our understanding of each other's movements will become.

"It's important to know where to stand in order to receive a pass and it's only normal that with more time on the pitch we'll develop ways of playing that will hopefully lead to more goals like this."

Reguilon and Gil focused on fighting back

Tottenham were top of the league at the beginning of September, but a month later Nuno's side find themselves in the bottom half after three straight losses.

Their opponents this weekend, Aston Villa, sit above them in eighth and arrive in north London in buoyant mood after their victory at Manchester United last weekend.

Dean Smith's side also came away with maximum points on their last outing at the Tottenham Hotspur Stadium back in May, and Reguilon has called on his team-mates to provide a reaction following their recent domestic struggles.

"We always go into derbies feeling we ought to win," reflects Reguilon, who scored an unfortunate own goal in the corresponding fixture against Villa last term.

"I can assure the fans that we were more angry than anyone else with what happened. But we always have to quickly get over defeats as we play games every three days.

"You always have to immediately clear your mind of previous setbacks and think of what's coming next. Having the Europa Conference League win has enabled us to move on from last Sunday and now the mood is a lot better."

In losing to Arsenal, Tottenham became only the second team in Premier League history to win their opening three fixtures and then lose the next three after Everton in 1993/94 - and there is a clear determination to ensure the September slump doesn't continue into October.

Gil adds: "It's been a really positive reaction in training to the disappointment of losing the north London derby. We know how much this game means to the fans, but we showed a strong response in midweek and are fully focused on returning to winning ways in the Premier League.

"We started the season really well with the three wins but clearly the way things have gone since then has given us a bad feeling. We have to turn this around as quickly as possible."

Can Kane launch campaign against Villa?

If Spurs are to put an end to their losing streak, they will need Harry Kane to rediscover his form.

The coveted England centre-forward hasn't found the net this term in the league since being heavily linked with a move to Manchester City all summer but has seven goals in eight Premier League games against Villa.

His hat-trick off the bench in Thursday's 5-1 demolition of Slovenian minnows Mura in the Europa Conference League suggests he hasn't lost any of his scoring touch.

Villa will, however, be an entirely different proposition to the lowest-ranked side playing European football this season, according to Uefa's coefficient, and both Reguilon and Gil believe Kane's class will shine through once more.

"He's still right up there with the best three to five strikers in the world," Reguilon says. "It's only natural that a run without scoring can impact morale, but he showed on Thursday that his confidence hasn't been affected.

"He scored three goals and that's not only good for him but for us as we count on him. Clearly, he's someone we need to keep scoring and he's someone whose goal tally each year isn't normal. I'm in no doubt that he'll continue scoring goals throughout the season as he's always done."

Gil agrees with Reguilon's assessment of Kane as one of the world's top five strikers, adding: "I think it's crazy when people doubt his quality. If you know how strikers live, you can be five games without scoring, and then you may go on a run of scoring in five or six games.

"Strikers live off scoring streaks, so maybe now he'll be on a run. We saw that on Thursday, and I'm pretty sure he'll score between 20 and 30 goals this season."

Follow Tottenham vs Aston Villa in our dedicated live match blog. Highlights will also be published on the Sky Sports digital platforms and the Sky Sports Football YouTube channel shortly after full-time.