Tottenham drew 0-0 with Everton in Antonio Conte's first Premier League game in charge on Sunday; their performance displayed a familiar lack of cutting edge but there were also early signs of the former Chelsea and Inter Milan manager's impact

Tottenham were held to a goalless draw by Everton in Antonio Conte's first Premier League game in charge of the club but the Italian has made an immediate impact on the way they play.

Sunday's stalemate made it three Premier League games without a win for Spurs and two in a row in which they have failed to register a shot on target following the 3-0 loss to Manchester United.

Their poor start to the season under Nuno Espirito Santo has left them with ground to make up in the top-four race and Conte said last week it will "take time" to turn their fortunes around.

But the former Chelsea manager, who oversaw a chaotic 3-2 win over Europa Conference League opponents Vitesse in his first game at the helm last week, did at least show how he is attempting to put his stamp on the side in their draw at Goodison Park.

Conte has wasted no time in changing Tottenham's shape, doing away with Nuno's 4-2-3-1 formation and switching to the 3-4-3 system which has brought him so much success in the past.

Conte is known for placing considerable attacking emphasis on his wing-backs, from Marcos Alonso and Victor Moses at Chelsea to Achraf Hakimi and Ivan Perisic at Inter Milan, and he is now doing the same with Sergio Reguilon and Emerson Royal at Spurs.

Their marauding runs forward did not yield any goals against Everton but Reguilon and Emerson certainly posed problems for Rafael Benitez's side, positioning themselves high and wide on the flanks when Spurs were in possession in order to stretch the play.

"When you think of wing-backs, your job, when you're playing against a 4-4-2 like Everton's, is to stay wide," said former Liverpool, Aston Villa and Leeds full-back Stephen Warnock on Sky Sports News.

Conte uses the approach partly to drag opposition wingers backwards - "the reason for that is you want to make sure they can't start attacks against you," added Warnock - and partly to exploit the space behind them in the attacking third.

Against Everton, that space was created by Conte's use of a narrow front three.

"What you've got in the centre of the pitch is your three strikers taking care of four players in that area," added Warnock. "It's compacting the back four and it's leaving the space outside. Reguilon gives himself four or five yards to pick out the cross."

While one wing-back has space to deliver the cross, the other arrives at the back post to try and get on the end of it. There, he will often find himself competing for the ball with an opposition winger, who, like the winger on the opposite side, has been forced backwards.

There was an example of it in the first half at Goodison Park, when Reguilon's deep cross found the onrushing Emerson up against Demarai Gray. "That's a perfect scenario for the wing-back because you'd fancy yourself coming in against a winger," said Warnock.

The Brazilian could not direct his header on target on that occasion but the hope for Conte is that in future Spurs will capitalise.

Conte asked his centre-backs to contribute offensively against Everton as well as his wing-backs. 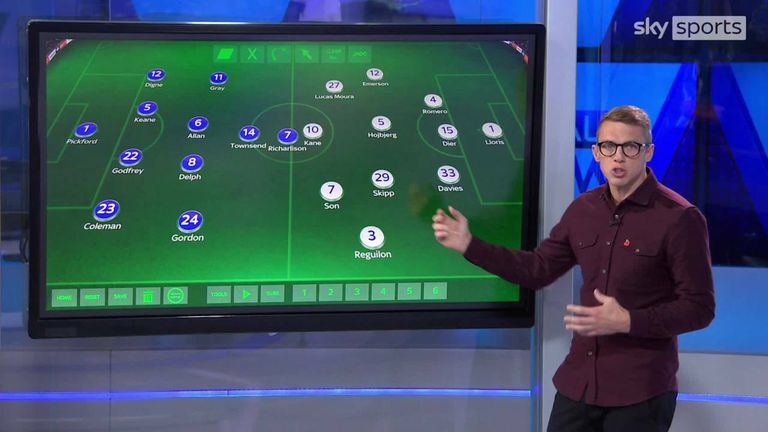 The concept of overlapping centre-backs is not new to the Premier League - Chris Wilder used it to good effect following Sheffield United's promotion in 2019 - but it was a first for Spurs.

With Eric Dier holding his position in the centre of Conte's back three, left and right-sided centre-backs Ben Davies and Cristian Romero were encouraged to get forward in possession.

Davies, a natural full-back, was particularly adventurous in support of Reguilon on Tottenham's left. "He doesn't have to stay back, he can attack," said Warnock. "Such is the pressure and the numbers going forward, Everton couldn't deal with it."

Indeed, while Davies' primary responsibility was to help Spurs keep a first clean sheet since August, it was notable that he also had more touches than any of his team-mates (91). He even attempted the most passes in the opposition's half (36).

At times, Davies charged forward without even touching the ball but instead making decoy runs intended to create space for others.

By giving Davies and Romero licence to push forward in that way, Conte had another means of destabilising Everton's defensive shape and allowing Spurs to outnumber them.

"There are overloads all over the pitch and that's what he's trying to create," said Warnock.

Expect to see more of it in the weeks and months ahead.

The 52-year-old is notoriously demanding of his players - "he loves training hard," Reguilon told newspaper reporters after Sunday's game - and places huge importance on physical preparation.

His backroom staff at Spurs includes three fitness coaches in Constantino Coratti, Stefano Bruno - both of whom he has worked with previously - and Gian Piero Ventrone - who he knows from his playing days - and it appears their work is already paying off.

Against Everton, Spurs recorded their highest totals both for distance covered (110.9km) and high-intensity sprints (151) in any game this season, according to Premier League tracking data.

Their total of 151 sprints, meanwhile, was the second-highest of any Premier League side in the latest round of fixtures, behind only Marcelo Bielsa's famously industrious Leeds.

The numbers represent a dramatic transformation in terms of Tottenham's off-the-ball efforts and prove the players are responding to Conte's demands.

"Today, I saw the heart of my players, the passion, the will to fight, the will to sacrifice, to understand this was a very difficult moment for us," he said after the game. "To see this makes me more confident for the future."

For all the encouraging signs, however, Tottenham's performance against Everton also underlined the scale of the challenge Conte faces to restore the side's creativity and goal threat.

Highlights from the goalless draw between Everton and Tottenham

Under Nuno, no Premier League side attempted fewer shots than Spurs, while only Norwich scored fewer goals. In terms of expected goals, which measures the quality of chances created, only Norwich and fellow strugglers Watford and Newcastle scored lower.

Conte's system did cause Everton problems at Goodison Park but there was no obvious improvement from Spurs in terms of their cutting edge in the final third.

Their failure to test Jordan Pickford took them to 225 minutes without a shot on target in the Premier League. Their expected goal total of just 0.68 was in fact their third-lowest in any Premier League game this season.

Harry Kane, so prolific in previous seasons, continues to look bereft of confidence, with only one goal in 10 Premier League appearances following a summer of speculation surrounding his future.

And the service into him remains inadequate too. As Conte pointed out in his post-match press conference, Spurs got into promising positions but too often wasted them.

"If I have to see a negative aspect in this game, I think we made many mistakes with the forward pass," he said.

"If we made the final pass in the right way, we could have chances to score. Instead, we made many mistakes with the last pass."

Conte will need to change that if he is to deliver the improvement Spurs fans crave but other elements of Sunday's performance suggest he is already putting his stamp on the side.

"Considering this was a week into his reign," added Warnock, "there were very positive signs."