Jack Grealish is the poster boy but it is - in his own manager's words - "untidy on the eye" McGinn who has become a cult hero at Villa, and even had Manchester United interested in the summer. Why?

After 11 games, the former Hibernian midfielder was the only Premier League player that ranked in the top 10 for shots, tackles, dribbles, fouls won, duels won and possession won in the final third. To call him an all-rounder would be an understatement.

The noise around him has not fallen on deaf ears.

"I was sat in the garden the other week having a cup of coffee and I could even hear my neighbour's kid singing the McGinn song in the bathroom," Smith tells Sky Sports ahead of Villa's trip to Wolves on Super Sunday.

The Villa manager sits relaxed and at home at the training ground of the club he supported as a boy. Pitches are backdropped with building sites as the Bodymoor Heath complex continues to be relocated nearby to make way for HS2, but it remains a stone's throw from the Belfry which Smith visits "now and again - if I want to take some money off John Terry".

The club is in transition following a £100m-plus investment in new players after a three-year Premier League absence but McGinn, who has played every minute of Villa's campaign so far, provides consistency. He has been named man of the match in four of Villa's 11 league matches.

The reasons are technical and tactical. His understanding of the game is his best attribute, according to his boss, "knowing when he needs to slow it down, when he needs to quicken the tempo". But McGinn's character is what sets him apart.

"People sometimes overlook that, and that's what makes him," says Smith. "He's well liked in the dressing room, he's got a bit of banter about him. He goes out and trains hard, doesn't train well every time, but trains hard. When he goes out and plays it's almost like it's his last game.

Bryan Robson could bustle, tackle, score and create - John's nowhere near that level yet but that's the way he's heading.

"It's hard to liken him to somebody but when I was growing up one of the best players was Bryan Robson. He could bustle, tackle, score and create - John's nowhere near that level yet but that's the way he's heading as long as he keeps progressing the way he is. He would probably rather me give a Scotsman as a comparison!"

The dilemma for Villa's manager has been what to do with a player that can do everything. "I'm asking him to get in the opposition box and score, but also create," says Smith, who shifted McGinn into a more advanced midfield role after taking over as manager in October 2018. "That was the thing I felt we could help him with, because of his intelligence tactically." 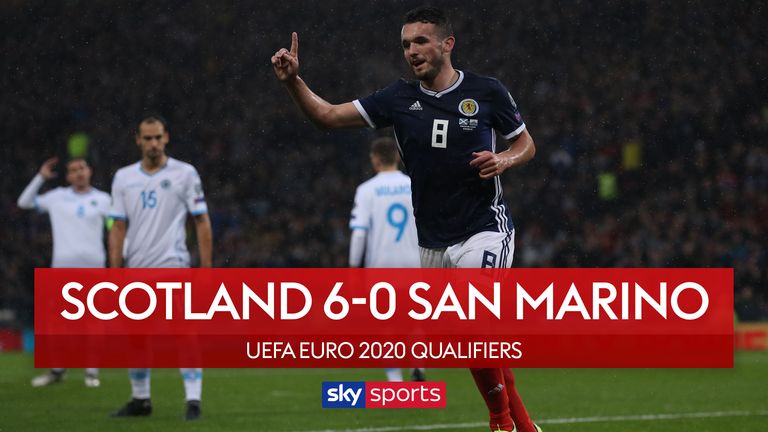 The change worked. McGinn scored six goals in Villa's end-of-season promotion run, including the '£170m' goal in the play-off final. Only £22m summer-signing Wesley (four) has scored more goals for Villa this season than McGinn, who got his first international hat-trick for Scotland last month.

But McGinn will be the first to admit he should have a higher return, says Smith. The midfielder has had more shots (32) than Pierre Emerick-Aubameyang, Marcus Rashford and Teemu Pukki.

"It's probably been a little bit about sometimes reining him in," says Smith. "But we certainly don't want to stop him doing what he's really good at, which is arriving in the opposition box."

'It won't bother John that people are looking at Jack'

Grealish, 24 and just a year younger than McGinn, has been nominated for the Premier League player of the month and continues to be closely watched by England manager Gareth Southgate. The Birmingham-born No 10, with his slicked-back hair and shins exposed, is the most-fouled player in the top flight. McGinn, third on that list, is happy to fly under the radar.

"They're thick as thieves the two of them - Jack and John," says Smith. "John made a comment that in the looks department they'd be 12 out of 20, he'd be two and Jack would be 10! They work really well together. They've got a great understanding and great banter away from the pitch as well. It helps that they click together.

"It won't bother John that people are looking at Jack all the time. He'll actually shy away from headlines, just gets his head down and wants to play football."

Pep Guardiola called Grealish "too expensive" for Manchester City earlier this month. When McGinn was asked about his own reported £50m price-tag, he valued himself at £5.

Smith is happy the Villa owners would not be quite so humble. It is why he is unfazed by McGinn's growing list of admirers.

"Our job is to improve players in order to improve our team," says Smith. "By him getting better, if it attracts suitors then so be it. There's nothing you can do to stop that. In fact you encourage it because we're ambitious here at Aston Villa, we've got two owners who are looking to the future and want to keep the best players that we've got.

"We're not a club that wants to sell. We want to keep improving as a team and we've got owners, thankfully, that want to do that.

"The adoration of John McGinn is spreading very quickly."