Grealish reflects on becoming captain, scoring against Birmingham, promotion with Villa and his England hopes 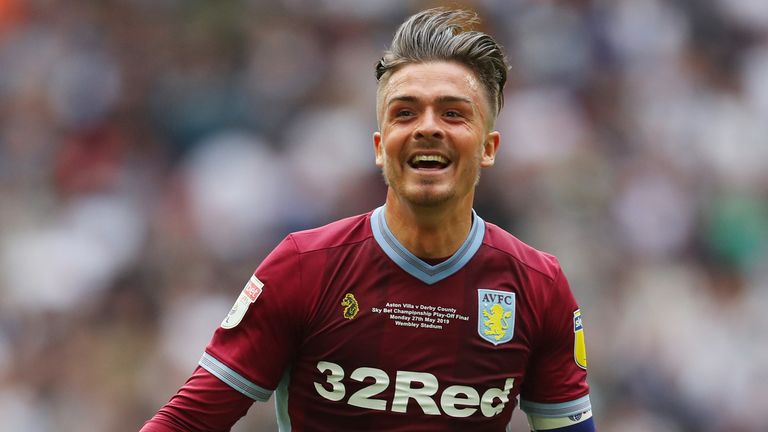 Aston Villa's Jack Grealish reflects on some of his most memorable moments from 2019, including his goal against rivals Birmingham

Jack Grealish admits he wouldn't be at Aston Villa now if they hadn't been promoted in the summer.

Reflecting on a superb 2019, the Aston Villa skipper admits defeat against Derby in the play-off final at Wembley would have spelled the end of his career with his boyhood club.

On his return from long-term injury in March, Dean Smith made Grealish Villa's captain, scoring a stunner in a 4-0 win over Derby, before the club went on a 10-game winning streak.

"I remember being in the physio room on the Friday, and that's when the manager told me I'm going to be captain. That was probably the best conversation I've had at Villa.

"To be captain of my boyhood club, it's actually something I never really dreamed of because I never really saw myself as an actual captain. But I love the fact the lads look to me, if they want a goal, or if we're struggling, I think the lads do look to me more, and I thrive off it."

Also in March, Grealish scored the winner in a 1-0 victory against bitter rivals Birmingham, having been punched by a fan in the first half at St Andrews.

"Obviously, with what happened in the first half, I actually felt like it was set up. I remember saying at half-time, having not played that well: 'You've got to score!' It was just perfect."

Villa won promotion with a 2-1 victory over Derby in the play-off final at Wembley, but Grealish admits that with the club's financial situation, he would have been sold in the summer if they had stayed in the second tier.

"That day I was nowhere near good enough, but that was a time where you look around, and you've got people like John McGinn, he was unbelievable that day. That's where you can rely on your team-mates, that was the nice feeling. That's what you need in a team when you're not at your best.

"Obviously it was a must-win game and we went out there and we did the business."

On scoring a stunner against Manchester United...

Grealish has impressed in the Premier League so far, and received plenty of plaudits for his superb curling effort in the 2-2 draw with Manchester United earlier in December.

"That was my favourite goal ever. I've always wanted to play at Old Trafford. I played there in a Reserve League final, but it's not the same. As soon as I hit it, I knew it was going into the top corner. I couldn't have hit it any better."

With tough competition for an England spot, Grealish has so far been overlooked by Gareth Southgate, but admits his main priority in 2020 is to wear the Three Lions' shirt, and keep Villa in the top flight.

"I just want to go into the year, go off the back of 2019 with goals and assists, and fingers crossed get an England call-up, that's the main thing, and keep Villa up."