Anwar El Ghazi says he has been following the 'crazy' Premier League relegation battle as Aston Villa scrap for survival against West Ham, Bournemouth and Watford.

El Ghazi revealed how his heart sunk when his father messaged him to reveal Bournemouth had beaten Champions League-chasing Leicester 4-1 last week, while he was at a team debriefing meeting.

"Yeah definitely, absolutely [my heart sunk] when I saw the end result. I got a text message, I wasn't watching the game, we were in the hotel. My father messaged me and he was swearing, saying how unbelievable football is.

"He said Leicester lost the game against Bournemouth 4-1 and I was like 'is he serious?'. It's crazy, football is crazy. It will be really tough until the last game.

Villa had been without a win since the restart, but ended that streak with a 2-0 triumph over Crystal Palace on Sunday.

Focus shifts to Thursday's trip to Everton, but El Ghazi says he will still also be keeping an eye on Villa's relegation rivals.

"We won the game against Crystal Palace and we are looking forward to Everton now, three more finals to go," El Gazhi added.

"To be honest I am doing that, maybe because I am a football freak, but I definitely look at who other teams are playing. I understand the coach as well because at the end of the day we control only our own performances.

"But of course we are going to check who is playing West Ham, Watford and Bournemouth." 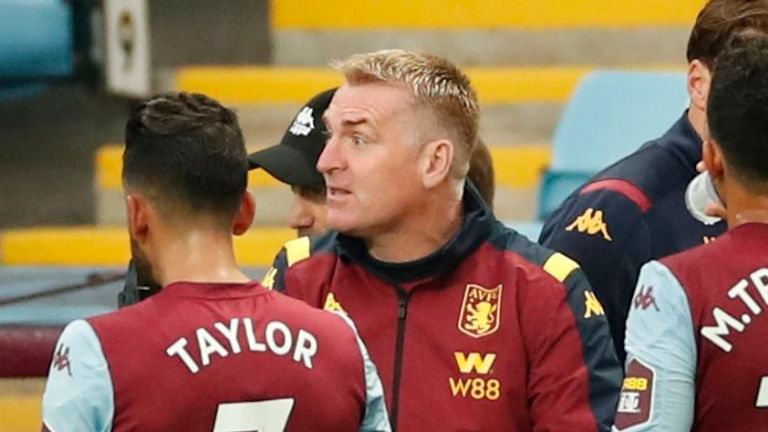 Aston Villa manager Dean Smith says his players can handle the pressure and beat relegation from the Premier League.

Villa travel to Goodison Park to face Everton on Thursday, live on Sky Sports, but manager Dean Smith says the Toffees will not get the benefit of home advantage without their fans - a reality which has on balance hurt Aston Villa who had six home games left after the restart.

Smith said: "[Playing behind closed doors] has been a leveller for any team, the home advantage has disappeared with not having the supporters there. We felt it certainly and I am sure Everton [and other clubs] would say they have felt they have lost that advantage.

"It's disappointing because we had six of our 10 games at Villa Park which could have been a big advantage for us."