Laurent Robert hopes Newcastle's prospective new owners can lead the club to Champions League glory - with his son Thomas among the stars of a new-look team.

The former France international has always followed the fortunes of Newcastle and was moved to tears when his successful four-year spell came to an end 15 years ago.

Robert, now 44, coaches the forwards at one of his other ex-employees Montpellier - and passes on valuable tips to his 19-year-old son Thomas, who has recently been strongly linked with a move into English football.

"I'm very happy for the takeover because I think Newcastle can go back to a very high level. I think the club is big enough for that," said Robert.

"When I arrived at Newcastle, their position in the table was not very good. Then in the first season we finished fourth, and the season after that we were third.

"We played in the Champions League and that's why you want to play football. I wanted to play in the competition every year when I was at Paris Saint-Germain.

"Sir Bobby Robson was our manager and I played with great guys like Alan Shearer and Gary Speed. They were great players and great friends. My wife and I cried when we left.

"I still speak with fans on Instagram and I want to see Newcastle back at the top and to even win the Champions League - why not? I want to come back to see one game there - maybe when Thomas is playing there."

Thomas has impressed in the UEFA youth league for Montpellier B against the likes of Benfica and Chelsea. 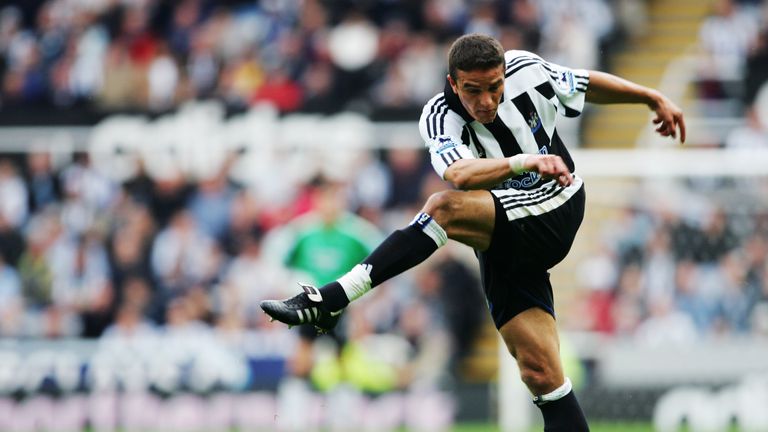 "When I went to Newcastle from France, I found the Geordie-speak very difficult to understand."

He is free to leave France after rejecting the chance to stay in Ligue 1. He has been linked with moves to Celtic and Rangers - with reports also claiming Newcastle have asked to be kept informed of his plans.

"I know he has the quality to play at the highest level," added Robert, who helped Newcastle qualify for the Champions League twice, as well as reach a UEFA Cup quarter-final.

"He likes to practice every day and train hard. I'm sure he has the ability to be better than me. He has a great left foot, right foot and can head the ball - unlike me!

"I don't just coach Thomas. I work for Montpellier and I coach the attackers at the club. I'm with Thomas twice a week. That's the reason he has a good left foot!

"Every day we talk about English football and he said to me many years ago that he'd like to play in England.

"When I went to Newcastle from France, I found the Geordie-speak very difficult to understand.

"When Thomas goes to England, there will be no problem. He likes the atmosphere at the stadiums and even the temperature! I told him that English football is the best in the world."

The £300m deal has been held up by the coronavirus pandemic and is awaiting Premier League approval.

"I remember my dad's career but I was a little bit small when he played at Newcastle," said Thomas.

"I recall him playing at Benfica and with Toronto. We don't play the same way because I dribble more than he used to. He has a great left foot and I train every day to be as good as him on free-kicks and corners.

"I also think I might be a little bit faster, although he tries to teach me all of his qualities. Before every match I look at videos of my father to see how he scored his goals.

"I need to prove to everybody that I can play in a bigger team. I need to stay free of injury and help the team win. I have told Montpellier that I can't sign with them again unless I can play in the first team. Now I am free from Montpellier and can go somewhere else in the new season.

"My dream is to play in the Premier League in England - for me, it's the best competition in the world."