Manchester City clinched the Premier League title with Manchester United's shock defeat to West Brom on Sunday. Here's how Kevin De Bruyne was the driving force behind their success...

"He can do everything on the pitch," said Pep Guardiola. It was December and the Manchester City head coach was speaking to Sky Sports pundit Gary Neville about his team's most important player: Kevin De Bruyne. The Belgian had started the season brilliantly, helping City win 14 of their first 15 Premier League games from his new berth in central midfield.

Moving a player with De Bruyne's attacking qualities further away from the opposition's goal may have seemed counter-intuitive but the logic behind it had already become clear. De Bruyne had provided four goals and nine assists at that point - a higher combined total than any of his Manchester City team-mates.

Manchester City's collective effort has put them miles ahead of the rest. This is one of the great Premier League teams.

But those numbers - and they are far higher now - do not show the full extent of his influence. In the middle of the pitch, alongside David Silva and in front of Fernandinho, De Bruyne has done everything. He has helped protect City's defence and enjoyed more time on the ball than ever before - averaging more than 100 touches per 90 minutes and close to 80 passes.

Instead of depending on service, De Bruyne now provides it. "The main thing that changed is before I had more waiting, but now I am more creating," he said in the Sky Sports Match Zone earlier this season. From back to front, Manchester City's attacking play flows through him. He sets the tempo, deciphering the quickest route to goal and choosing his passes accordingly.

De Bruyne's starting position is deeper but it has allowed him to dominate the midfield and drive Manchester City up the pitch. This season, he has made 1,179 passes ending in the final third - 158 more than anyone else in the Premier League. According to Opta, De Bruyne has also been involved in the most passing sequences leading to a shot on goal.

De Bruyne is City's architect, the man at the centre of the passing patterns, and his vision and creativity have allowed their forwards to run riot. Sergio Aguero, Raheem Sterling, Leroy Sane and Gabriel Jesus have scored 57 goals between them in the Premier League alone. De Bruyne has registered more assists (15) and created more chances (103) than anyone else in the division and his influence is not lost on them.

"I am very lucky because most of the goals come from his assists," said Aguero in February. "For me he's a really special player," added Sane last month, "an unbelievable player with the way he plays, how he shoots and how he passes the ball. It's really nice to see it."

From the defence-splitting assist for Sane against Stoke to that volleyed through ball to release Sterling against Tottenham on Saturday, De Bruyne's season has been dotted with moments of genius. What's even more impressive, however, is his ability to conjure those moments when City need them most.

There was the stunning winner against Chelsea at Stamford Bridge in September - one of four goals he has scored from outside the box this season - and when City's form dipped before Christmas, there were decisive assists for Silva and Sterling in the dying minutes of consecutive games against West Ham and Southampton.

Five games that won the title

We pick out five of the key games in Manchester City's Premier League title triumph.

De Bruyne has shown durability to match his technical and mental strengths. The 26-year-old has started all but one of City's 33 Premier League games so far, with Nicolas Otamendi the only outfield team-mate to have played more minutes. That despite the fact that his new role, where he charges from one box to the other, is perhaps the most physically demanding on the pitch.

Even in the gruelling second half of the season, however, De Bruyne has covered ground with the same appetite. According to Premier League tracking data, he has run the equivalent of eight-and-a-half marathons (361km) over the course of the season. No other City player comes close to that total. Only eight Premier League players have run further. 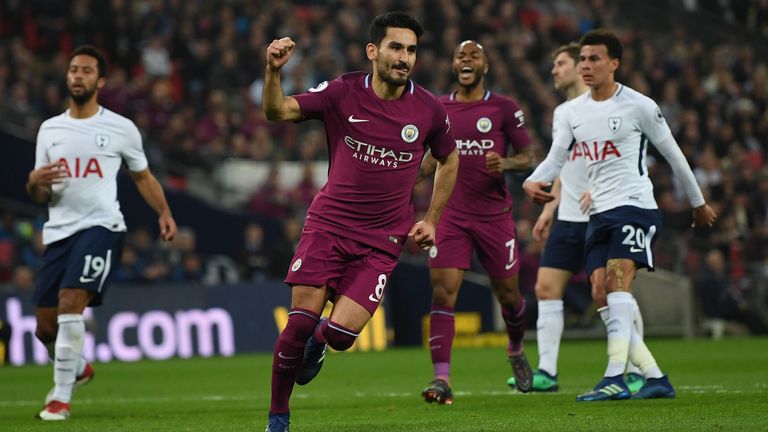 His work ethic is relentless and so too is his brilliance. Even in games when he does not register a goal or assist, he is crucial to everything City do. Between August and April, It is difficult to remember a single poor performance in the league. "It is not one game," said Guardiola in February. "It's the whole season, every three days playing that way."

Mohamed Salah's extraordinary goalscoring exploits mean he is now the bookmakers' favourite for the PFA Player of the Year award, but De Bruyne would be a deserving winner. He has been the heartbeat of a team which could yet finish the season with the most points and most goals in the Premier League era. And he has done everything along the way.