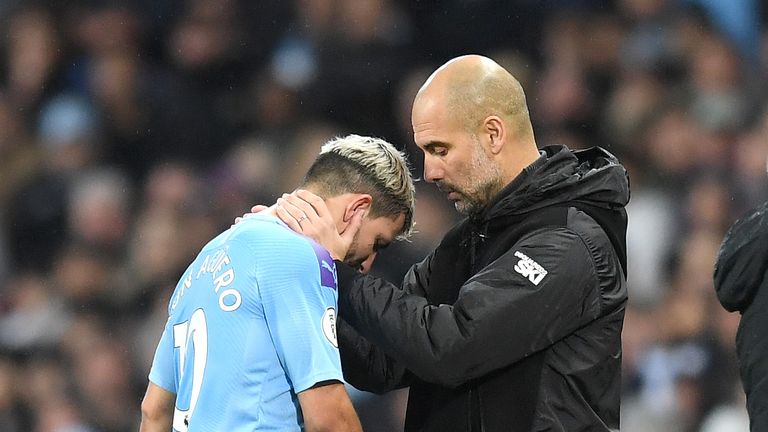 Manchester City manager Pep Guardiola says Sergio Aguero will be out for a "few weeks" due to the muscular injury he sustained against Chelsea.

The City boss also confirmed Aguero's injury will rule him out of the derby against Manchester United on Saturday, December 7, live on Sky Sports.

The 31-year-old limped off late in the second half of City's win over Chelsea on Saturday and his absence comes at a bad time for the club.

When asked if Aguero would miss the derby, he replied: "Yes. Maybe we will have a miracle but I don't think so."

Guardiola's side face 10 matches in five weeks as they bid to close the nine-point gap to Liverpool in the Premier League, as well as secure progress in the Champions League and Carabao Cup.

Ahead of Tuesday night's home game against Shakhtar Donetsk - from which a point will secure a place in the last 16 of the Champions League - Guardiola said: "It's the toughest period happening now.

"It's a lot of games but it's what it is. My advice to my players and myself is not to think too much. We have enough good players and the mentality will give us extra. Maybe it will help us.

"I never came here and said 'oh, we didn't have this player'. I am so sorry for them but they have to recover individually. We are going to wait but that is why we have a good squad.

"It's the best thing to move forward. People don't care if you have injuries. Find the solutions you have to find."