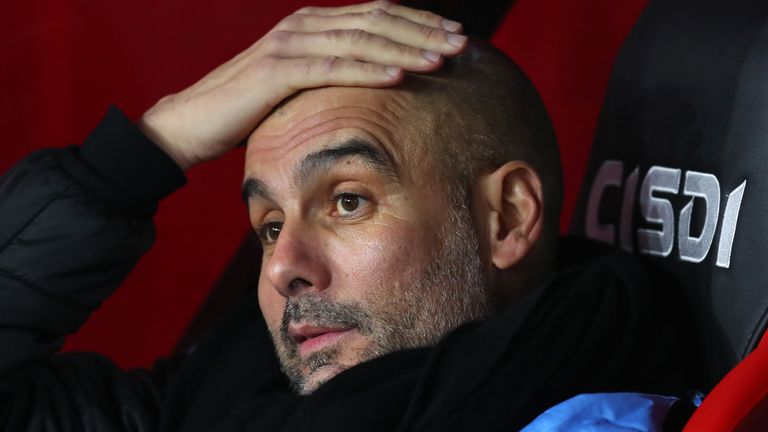 Sky Sports' Gary Neville has predicted Manchester City will win their appeal to overturn their two-year ban from European football.

City are facing a two-year ban from European competition for Financial Fair Play rule breaches, a ruling the club will appeal against at the Court of Arbitration for Sport.

"I think City will beat FFP," Neville said. "I have no confidence in UEFA to be able to do the right thing. I think it will be overturned.

"I have no faith in them whatsoever, I think they are hopeless organisation who just apply erratic disciplinary sanctions.

Neville also does not believe City will suffer a mass exodus of players if the ban is upheld.

"I don't buy into this thought that players will leave, and they'll all end up wanting to move from Manchester, I think they will show a level of patience, the ones who see it as a long term, but it does cause them a problem from a perception point of view."

Fellow Sky Sports pundit Jamie Carragher believes UEFA will be 'desperate' for Pep Guardiola's side - who face Real Madrid in the first round of the knockout stage - to fail to win the tournament in May.

"What would happen if City won this competition this season? They are the favourites, they are one of the best teams in the competition," Carragher told Monday Night Football.

"It would make a mockery of it.

"UEFA will be desperate for Manchester City to be beaten by Real Madrid, absolutely desperate.

"Can you imagine people from UEFA having to give the cup in Istanbul to a Manchester City player?

"The first question that Pep Guardiola will be asked after the game is whether it is a fake win. He will be getting asked whether they should be in the competition.

"If they win it, it will almost be tainted.

"I think UEFA should either have taken City out of the competition right now or they should have left this decision until the end of the season."

Neville is sympathetic towards Manchester City on the basis that he believes Financial Fair Play is not the right system to protect clubs.

"I have always thought that FFP is the wrong way to apply the rules," Neville told Monday Night Football.

"Ultimately, if owners sign clubs up to contracts, they should have the money to fulfil the contracts. I think Manchester City's owners have got that.

"If you look what Chelsea, Manchester City, Leicester and Blackburn going back to the days of Jack Walker, those clubs below Manchester United, Liverpool and Arsenal, who have all the revenue and the tradition to be able to compete under FFP.

"What we are saying is that FFP stifles investment into football clubs that can stimulate communities, like Blackburn and like other clubs.

"Do I like it from a point of view that I want Manchester City to succeed? No because I would rather Manchester United be successful but the idea of being anti-competitive in football is ridiculous.

"The idea that the same two or three clubs are able to win every single year through financial might is anti-competitive.

"I am obviously an owner at Salford. We would never be able to do what we are doing if we weren't able to invest in our club.

"We are saying that essentially we should be creating a status quo in football, almost like a franchise.

"I think the top clubs in Europe like Manchester United, Bayern Munich, Barcelona and Real Madrid, they would take football towards a franchise model if we didn't have the emergence of owners who could invest in other clubs.

"There are negatives with that and we have seen horror stories where owners have invested in clubs but then not followed through with their investment. That has got to be stopped but there are other ways of stopping that without applying FFP.

"So, I have a real problem with FFP and I have done for seven or eight years."

Keane on positives for City

Much of the speculation following the news of City's ban has focused on the possibility that some of the star names could want to leave the club if they are denied European football.

"It's a big blow to them, obviously," Keane told Monday Night Football.

"From the point of view of the players, if I was in that dressing room, the gist of it I'm getting is that they will probably appeal it. A one-year ban you can get your head around it but two years is a big blow.

"The only other side to it is this year it might make them even more determined to try and win it. You have to try and look at the positives.

"However, we are talking about Man City and we have to remind ourselves that they've never been in a final. There's no guarantee that they were going to win it over the next one or two years.

"It is obviously very damning for the club in terms of their brand, the financial side of it and attracting the best players.

"But there are still a lot of challenges out there like winning the league title. And when you've got Pep Guardiola at your football club, you are still going to attract very good players."