It was last summer that the Manchester City manager said he "needed enemies"; his admission yet another glimpse into the psyche of a man whose pursuit of greater heights has unwavered in its intensity.

"Sometimes, when someone pushes me, yes, I fight back," he says, speaking to Sky Sports in an exclusive interview and thinking about his emotional response to setbacks and challenges at the very top of the game.

"You need those hypothetical enemies sometimes - to say, 'Ok, I'll show you who we are as a team.'

He suffered the worst defensive display of his managerial career last weekend but Guardiola appears serene and sure.

A 5-2 defeat at home to Leicester was the first time in 686 games as a manager that one of his sides had conceded five goals. After Jamie Vardy had sliced through sky blue shirts, the hosts sucked in and then sucker-punched, Gary Neville declared Guardiola to be facing the "biggest challenge of his career".

There were plenty of mitigating factors.

These are, of course, the fledgling weeks of a campaign that remains out of kilter. Guardiola's side, with that delayed start and without a recognised pre-season schedule to oil the components and spark the connections, was shorn of eight first-teamers against Brendan Rodgers' side. Three of the five goals shipped were penalties; punishments for individual haste and wayward positioning.

Guardiola, for whom defence and attack have always been so intrinsically linked, stresses the elementary: "Football has changed in the last 10, 20 years; defenders need to create, to play - it's not just at the 'big' clubs; look at Brighton, how they encourage their defenders to build - but they must defend, they can't make mistakes."

Yet there has been a feeling of familiar flaws; defeats to Lyon in the Champions League and Arsenal in the FA Cup recalled, as well as what proved to be an 18-point gap to Liverpool; suggestions that their ability to defend as a whole has dipped, that it has become easier for the opposition to burst through the midfield and beat the press, that a little belief might have been lost in their ability to defend with a high line.

Guardiola's side certainly faced more shots and more on target last season - up to 115 in 2019/20 from 83 in 2018/19. They are conceding better quality opposition efforts, too - and more from fast breaks.

An aggressive counter-press when possession has been lost has long been a Guardiola trademark yet Opta's PPDA metric - representing the number of opposition passes allowed per defensive action, whereby the lower the figure, the more active a team is in regaining the ball - calculates a gradual increase from 8.3 in 2017/18 to 10.1 last term. Ball recoveries have also dropped between those seasons.

But Guardiola is calm right now.

Any scrutiny has served only to strengthen his convictions that individual errors, injuries and circumstance are to blame over systemic malfunction.

"The high line has always been like this for me," says the Spaniard, whose sides have had the best defensive records in eight of his seasons in management. "My teams have conceded the fewest goals playing 40 metres away from our box. I've always believed the further you are from your goal, the less chance you have to concede.

The substitution of Fernandinho against Leicester for Liam Delap was a rare sort of Guardiola change that failed to pay off but a double pivot in midfield, pairing the 35-year-old with Rodri, was effective against Wolves. The City boss says he will continue to use the strategy of two deeper-lying midfielders, "depending on the opponent and their build-up," and cites victories against Real Madrid and Liverpool as evidence against a potential attacking trade-off.

Fernandinho - whom Guardiola says will now only play at the back "in an emergency" - remains a key figure and it has been a relief for Guardiola to call again on another in Aymeric Laporte, whose return from a serious knee injury saw City record nine clean sheets in their final 11 games of last season.

Against Burnley in midweek - a win reassuringly secured with minimum fuss - the Frenchman, forced to quarantine after a positive coronavirus test, helped to craft City's first with a slide-rule pass. But, crucially, it was the way he could be heard at Turf Moor, organising and cajoling.

"He's been playing at an outstanding level ever since he's arrived, when he has been fit; unfortunately when he came back from the injury, he struggled to reach his best level but now he's feeling good. He's such an important player for us."

Laporte should soon have Ruben Dias alongside him and Guardiola has been buoyed by his latest piece of business.

The Portugal international's arrival from Benfica takes Guardiola's spending on defenders at the Etihad to more than £400m but there is a sense that even at 23, Dias is finally the sort of player who can replicate the kind of influence Vincent Kompany exerted. 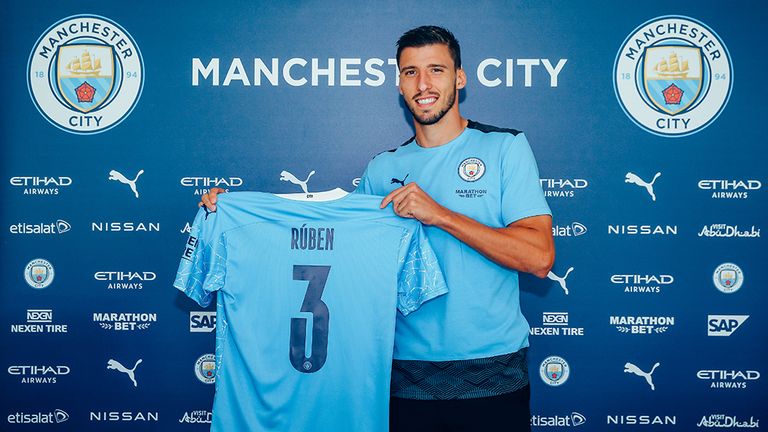 His former coach Joao Tralhao believes Dias will "lead everything at City and be the coach's voice". Guardiola hopes his new man will spread the message off as well as on the field. "It's not just about the transmission from the coach to the pitch, it's about transmission to the other players, to his mates."

"We knew all about his personality before we tried to buy him," Guardiola adds.

"He's not just a player with skills, he's a natural leader - you have to be to be captain of a team like Benfica, one of the greatest teams of all time in Europe, at 23. In a short time he'll be captain of Portugal too.

"He needs time - to know the players, to know the way we want to play, but he came here for six years; in that time he will become an important player for us."

Where will Guardiola be by then?

This is the first time he has steered a club into a fifth season. He left Barcelona seemingly counting the emotional cost of being the most successful manager in the club's history. He already holds claim to that title at Manchester City and though clarity is yet to come over his contract, he is adamant his message has not diminished with time.

"Every day I try to get the players believing in the message. Most of my backroom staff have remained the same and look what we've won in three seasons.

"If ever the players don't believe the message, it will be my fault. I have to keep doing my best to try and convince them. I know that when you're winning, everything you're doing is right, and when you lose, you have a problem. But they're pretty convinced by what we're doing."

Guardiola is as convinced as ever by his footballing ideals and it feels fitting that this weekend he comes up against Marcelo Bielsa.

No one could usurp Johan Cruyff - "the most influential person in my life" - but Bielsa, whose own idealistic, attacking brilliance so deeply resonates with Guardiola, is the coach he "most admires in world football" - the kindred spirit that affords him calm right now.

"Marcelo is more experienced than me but his teams always play in the same way. That's why he's the one I admire the most - as a manager and also as a person.

"I never doubt my principles. Not even in the bad moments.

"You have to believe in your own convictions."