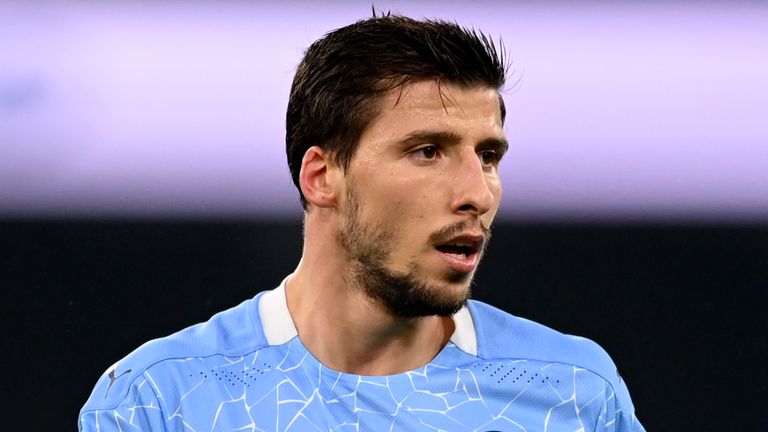 Manchester City's Ruben Dias has been crowned Football Writers' Association (FWA) Footballer of the Year for the 2020/21 season.

Manchester City's excellence on their way to the Premier League title this season was reflected in the voting as nine of Pep Guardiola's players picked up votes which accounted for 50 per cent of the total votes cast.

Reflecting on his award, Dias said: "It's a huge privilege, I'm very, very happy. I could not have done it without the success of the team, without everyone in the team deserving this award. Only by that, as a defender, am I able to be here to receive this prize. 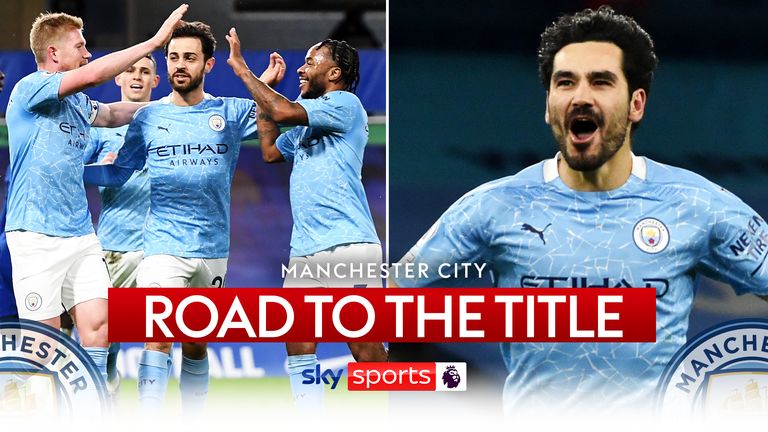 "Essentially, when I came I wanted to meet everyone as fast as possible, understand how the team plays. I knew the manager and the players, I knew a bit about the philosophy of the club because I am fan of football and I know City from the last few years.

"I had an idea of what I was coming to and I wanted to integrate myself as fast as possible."

Dias is the first defender to win the award since Liverpool's Steve Nicol back in 1989. The 24-year-old believes his recognition ahead of his goalscoring team-mates is a reflection of the team's unity.

"It means something because normally the ones who finish off the plays get the spotlight, but me receiving this award is a major example of our team," he explained.

"We work and build our game, it reflects the togetherness we have on the pitch. The spirit that runs through this team with these players, how we play like a family." 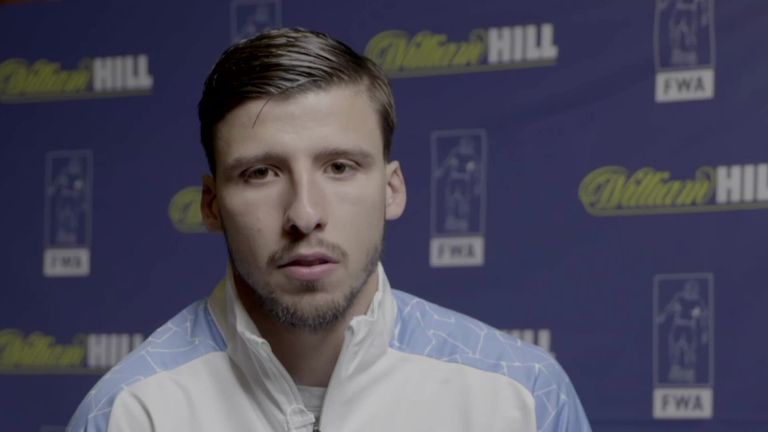 After joining from Benfica last summer for £65m, Dias has made 31 appearances for Man City this season, scoring one goal and helping his side register 14 clean sheets when he is in the team.

His partnership with John Stones at the heart of Guardiola's defence, which has conceded only 32 goals in total in the league, played a key part in City's Premier League triumph.

After just one win in their first three league games, Dias' increasing influence in the side helped them go on a staggering 21-game win streak in all competitions, including 15 successive victories in the Premier League.

Dias joins Chelsea's Fran Kirby, who was named FWA Women's Footballer of the Year for the second time in her career earlier this month.

The Footballer of the Year trophy has been awarded since 1948 when Sir Stanley Matthews was its first recipient.

'My father taught to me breathe positivity'

At just 24-years-old, Dias has stepped into the defensive general role at the Etihad Stadium, which has largely remained vacated since Vincent Kompany's departure, with great success.

He credits his competitive mindset and the influence he is able to have over his City team-mates to the teachings of his father.

"That strong mentality of turning fear into power, turning difficulty into something good, turning negatives into positives, that is something that comes from my father," he said.

"Now I breathe it, I breathe positivity. That is what made me come here and do everything I have done so far. That's the way to do it, give energy and every day look to get better.

"The mentality does have negative points, we have just won the title but I can't celebrate because I am thinking about the next trophy coming. It's difficult sometimes because you are so into it.

"We live in the middle of the storm and sometimes we don't have time to celebrate. When you play every three days, it is hard to shut off that mentality at the end.

"It's beautiful what is happening, to win the award, win the Premier League and be in the Champions League final.

"Next season is a new challenge and as a footballer you need to be hungry every time." 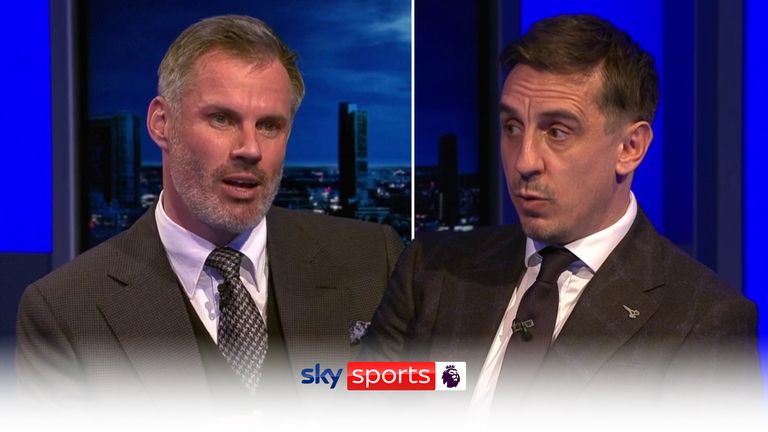 Speaking on the final Monday Night Football of the season as he and Neville revealed their 2020/21 award-winners, Carragher said: "I said on this show at the start of the season that if this signing didn't work, it would be the end of City and Pep.

"You might think that's a huge statement, but he was a £65m defender. They never replaced Vincent Kompany and last season that was a huge blow for them but he has come in and been the best defender in the league - and for me the best player.

Neville said: "Dias has surprised me, dominating like he has for someone so young. I played with Jaap Stam, Gary Pallister, Steve Bruce, Nemanja Vidic, Rio Ferdinand... Dias is one of those who makes the rest of the team safe.

"The impact of the great centre-backs is not just what they do in terms of their own performance, they impact everybody else in that back four and the people in front of them. Dias is exceptional.

"At the start of the season, I didn't think there was any way that City back four could win the league, so for him to do what he's done, he's been the most important player this season."

Redknapp: He is just a leader of men

"When you look at what's changed from this year to last year, obviously the circumstances, but I do look at individuals and how they can turn a team's fortunes and I believe that person for City is Ruben Dias," Jamie Redknapp told Sky Sports.

"He has created a brilliant environment there - you can see any time he makes a challenge, any time he makes a block, he's high-fiving, he gets people together… he's just a leader of men and for such a young man, to have that quality it's so unusual, especially in the modern day.

"He has got that Vincent Kompany, John Terry, Nemanja Vidic aura about him. He wants to defend, he's old school in that manner, but an incredible defender.

"That's the difference between this year and last year with City because they made so many individual errors with goals and they never really had a partnership. But Dias has made John Stones look like the defender we all thought he could be."

'Dias is the leader we all need'

FWA chair Carrie Brown says Dias' fighting spirit and leadership qualities on show at City this season, during what has been a difficult year for everyone, was the deciding factor that earned him many of the writers' votes.

"Ruben Dias turned heads soon after his arrival in Manchester, a 23-year-old belying his age with fortitude, steel, a relentless drive for perfection and an almost superhuman ability to read and anticipate phases of play.

"Pep Guardiola improves players, shapes them but at not point, has a new signing arrived into of Pep's already trophy-lade teams and exerted such influence.

"Dias has demanded the highest standard which have resulted in the swiftest of upturns in fortune not solely for Dias himself, but the team-mates to his left, right, front and centre.

"Dias is our FWA Footballer of the Year for his leadership on and off the pitch as much as for the infectious joy he derives from executing the are of defending to perfection.

"I wonder if it is quite poignant that, in a time when so many find their backs against the wall, there is heart to be taken from the joy Dias exudes in standing firm and quelling the storm."

"Perhaps, in this of all seasons, Dias is the leader we all need."

Why I voted for Dias, FWA member Adam Bate

Speaking to Pep Guardiola about Ruben Dias earlier this season, the Manchester City boss explained just what it was about the centre-back that had improved the performances of those around him. "Basically, he talks to them during the game. He anticipates. He does not play the game for himself, he looks what happens in front of him and behind him."

It is easy to forget that the Portuguese only turned 24 last week. John Stones, the defensive partner so transformed by the presence of Dias alongside him, is almost three years his senior.

But leadership does not always come with age and experience, it can be a characteristic innate to one's personality. Dias has it. He had it at Benfica when he was just a teenager.

A conversation with Joao Tralhao, his U18 coach, stands out.

"It was not his talent. It was his capacity to work. His focus. His mentality that he had in every session, every day. His ability to compete is amazing. He is special.

"He knows everything about leadership."

When Tralhao detailed the impact that Dias would have at City in September, it was easy to be sceptical. This was a team that had just conceded five goals at home to Leicester in the match prior to the player's arrival. It would take more than one man to solve that.

In truth, it has been more than one man. Guardiola had to make adjustments further forward to prevent some of the counter-attacking situations that were costing City dearly.

But just as Virgil van Dijk had shown at Liverpool, the presence of a genuinely world-class centre-back can ensure that what were once tactical flaws suddenly do not seem such a fundamental problem. His great positional sense has limited the danger and when called upon he has been able to respond. In one-on-one situations, Dias has been in charge.

He is a worthy footballer of the year.