Christian Nade: 'Football is great, but when it's over you're on your own'

The mental health charity Back Onside can be contacted on 07528 243100 or through the website www.backonside.co.uk

Scoring the goal which secured a memorable win for Sheffield United against Arsenal in the Premier League has been the highlight of Christian Nade's career.

On a personal level however the former Blades striker has faced some desperately difficult times. He tells Sky Sports how he has twice come close to taking his own life in a long battle with depression, and how he is helping other players who are struggling with mental health problems.

"Usually someone who suffers from this is the happiest person in the world in front of everyone," he says. "I'd be the first one in the dressing room laughing, joking and trying to make everyone happy. But inside I'm crying."

The first time that Christian Nade attempted suicide was in December 2014. Then a player with Raith Rovers, he recalls how, while on a beach near his home, he left his mobile phone at the edge of the water and walked in.

"I sent a message to my family to tell them that I couldn't deal with it any more but couldn't tell them why because I didn't even know why," he says. "I left my phone on the beach and I walked into the water.

"It was up to my neck and I stood there for I don't know how long. Then I thought I heard someone calling me and I turned around and panicked. I started to walk back and went home. The first thing I felt was shame at what I'd done and what I'd wanted to do."

Alerted by his family, it had been a friend who had called his name from the shoreline after coming to look for him. Nade finally decided to confide in one of the coaches at Raith Rovers, who recommended that he talk to a priest.

"Why didn't I open up before? Why didn't I talk to someone before?" he says. "As a big guy you don't want to admit that you're depressed because you think that everybody will just tap you on the shoulder and say: 'Come on Big Man - it's nothing. Nothing can hurt you.' But it's the opposite.

"Football is great. But when you finish the game you're on your own," he says. "The excitement, the adrenaline is over. You go back to your room, flat or house. And that's when it's dangerous. If you talk about it you're scared that the coach might decide that you're not ready to play in the next game. And you know that the only thing that keeps you alive sometimes is to be playing."

The former France Under-21 striker joined Sheffield Utd from Troyes in 2006. He made just a handful of starts in the Premier League as the newly-promoted Blades battled to avoid relegation. He nevertheless secured a place in club folklore by scoring the only goal in a game against Arsenal - United's only success in this fixture in the Premier League era.

Since then his career has been that of a journeyman, chiefly in Scotland but also including spells in Cyprus and Thailand. It has been an itinerant existence which, he feels, has played a part in the personal struggles that he has faced.

"I left my family when I was 15 or 16 to go to a French football academy and at the time I didn't know how I was affected by that" he says. "I was a young kid trying to live my dream. I think this was a big weight on my shoulders because I didn't realise that I was missing something, my family.

"When you go through your life you have up and down moments but you don't want to tell them about it because you don't want to worry them. And then you start to feel that you're on your own even when you're around people. I think that an accumulation of this - keeping stuff inside all of the time without being able to tell anyone - got the better of me."

Last year Nade faced another very difficult time in his life when allegations made against him by a former girlfriend led to a lengthy court case. He has since been cleared off all charges. 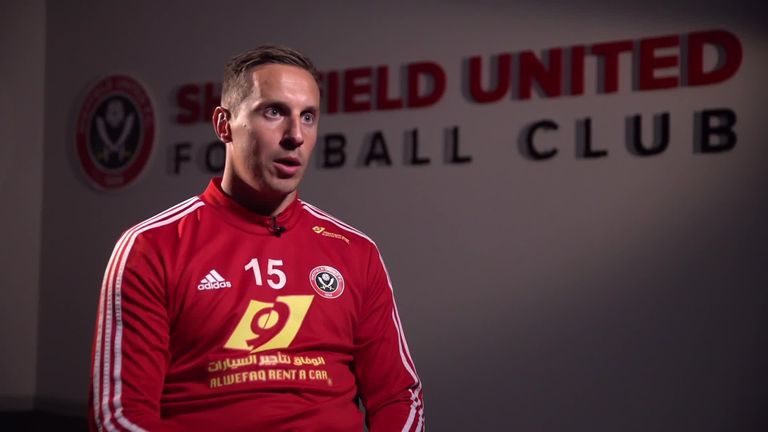 "I wouldn't go out, go anywhere or see anyone. I would cut myself off from the world," he says. "I'd turn everything off and sit in the dark for days and days. Then one of my friends said: 'You need to see someone,' and I argued with her because she didn't want to leave me and wouldn't stay away from my flat. In the end I said: 'OK - if my seeing someone will make you leave I'll do it.'"

He visited a doctor, who diagnosed post-traumatic depression.

"That was the day when I heard the big word 'depression' for the first time and that's when I started to say: 'OK - now the only way is up.'"

At the age of 35 Nade is still playing for Annan Athletic in SPFL League Two. These days he is dividing his time between scoring goals and trying to help other players - who he says contact him regularly - to cope with the problems they face. He works with Back Onside, a Scottish charity dedicated to helping people to tackle a range of mental health issues.

"When you watch a game you see 11 players against 11 players and maybe 10 of them might be suffering from depression. For them it's difficult to step up and to say: 'I need help.'

"Talking about it helps you to understand what the problem is and takes the weight off your shoulders. That's why I needed to do it and why many men and women need to talk about it and not feel ashamed. Anybody can suffer from depression."

The charity Back Onside can be contacted on 07528 243100 or through the website www.backonside.co.uk