Sky Sports' Jamie Carragher: "The way I watched Declan Rice at Goodison reminded me of Roy Keane... He was head and shoulders above everyone else on the pitch"; watch West Ham vs Tottenham live on Sky Sports Premier League and Main Event from 1pm on Super Sunday; kick-off 2pm 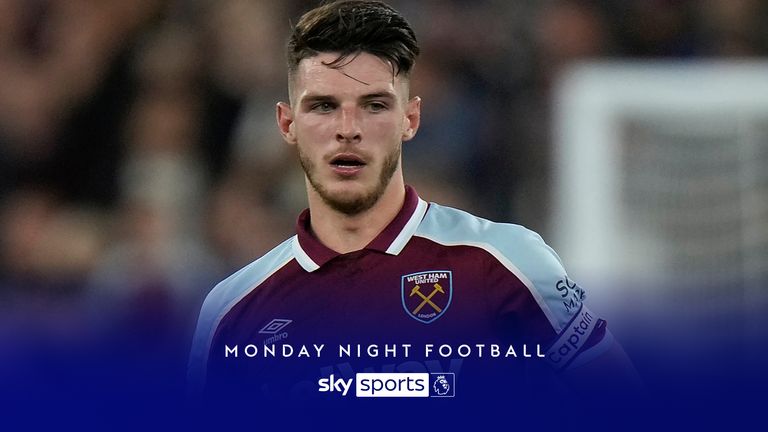 Declan Rice is reminiscent of Roy Keane at his best, says Sky Sports' Jamie Carragher, while Gary Neville discusses what the West Ham midfielder's next steps could be.

The 22-year-old has continued to shine in central midfield for club and country, quickly becoming indispensable to both and recently wearing the captain's armband for West Ham.

Sunday's 1-0 win at Everton arguably epitomised why Rice - who has been linked with a move away from West Ham - is forming into one of the Premier League's best midfielders as Carragher compared him to one of the greats.

Speaking on Monday Night Football, he said: "I watched Declan Rice against Everton and I gave him man of the match. Jamie Redknapp was talking before the game about the price tag of Declan Rice, people were saying it could be £80m, £90m, £100m, but Jamie was saying he needs more goals and assists.

"I understand that if you're paying that type of money, but the way I watched Declan Rice at Goodison reminded me of Roy Keane.

"I've never judged Roy Keane on goals or assists, or Patrick Vieira, or any of those top midfield players. That was his performance against Everton - running the midfield, having a presence, punching away passes like Roy Keane used to, running forward at times with or without the ball.

"Every time Everton attacked, he always seemed to be the guy there to stop it - it was a brilliant performance, I'm a huge fan of his.

"Soucek was getting forward a lot more, but he [Rice] was breaking things up. When he was making passes, they weren't 60 or 70 yard passes, but he was just punching passes in.

"It was reminiscent of when I used to watch Roy Keane at his best, in that holding role but still driving forward from these positions. And what impresses me the most is that final pass, sometimes you can get tired and lose your legs and let yourself down with that final pass.

"He was head and shoulders above everyone else on the pitch and with the stats, it's evident that he was. I mentioned after 15 minutes, Everton have got to do something about Rice, he was absolutely running the game. They never did and that's why West Ham were deserved winners."

Keane has also spoken about Rice's talent, and believes the midfielder is further ahead in his development as a player compared to himself at the same age.

He told Sky Sports in September: "I think Declan's improved as much as any player over the last one or two seasons. I know he's been linked with Man United and if you'd have asked me a year or two ago, I would have thought give him another year or two in terms of maturing.

"I think the next step will come when he's playing at a higher level, Champions League, competing for trophies. He's obviously a regular for England. There's a lot more to come from him."

Neville: Rice must prove he can make the step up

Speaking on Monday Night Football, Neville agrees with Keane's sentiments that Rice is arguably destined to make the jump to a bigger club in the future.

The Sky Sports pundit also discussed a possible positional change, as a number of central midfielders have done so for a spell of games in recent seasons.

Neville said: "I think the development will be, at some point - and West Ham fans won't like me saying this - he will somehow have to transfer to a club that plays in the Champions League, where he plays in a midfield with high expectations, where teams are dropping deep every week and there will be a different ask of him. 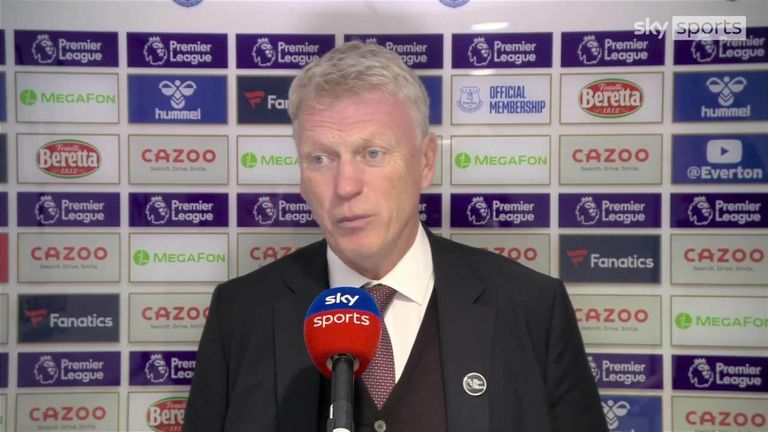 "I've always wondered whether he'd end up at a top club at centre-back just with the nature of the game. But he plays in central midfield for England at major tournaments and does well so he can play central midfield, but I do think there may come a point where he could be a centre-back as well in one of the top teams.

"The demands on the players to be good on the ball, drive out with the ball, I think he's a good defender. He's got a massive physique about him and he's got good speed. As a central midfielder or holding midfielder in a top team, he definitely could do it.

"You look at Liverpool and Fabinho in the next couple of years, clubs like Man Utd at the moment where you're thinking about Fred and Matic, McTominay might be there for another few years, but generally, there's some jobs coming up. How long with Jorginho be at Chelsea, Fernandinho at City?

"I think he will go to one of those top clubs and then we'll really see him develop at that point. You think of Wayne Rooney, who went from Everton to Man Utd, or someone like Rio Ferdinand, and he's got to prove he can make the same jump." 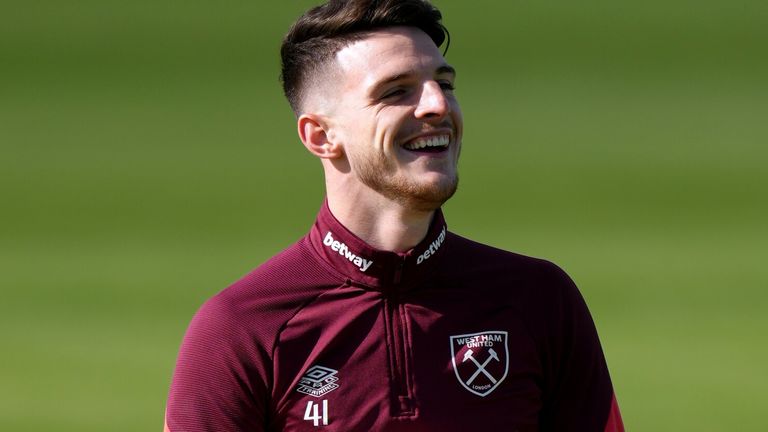 Only a few weeks ago, Rice was again asked about his future at West Ham. The midfielder insisted he is happy at the club and is confident he can achieve his ambitions with the Hammers.

"I feel you can see in my performances nothing's up, nothing's concerning me. I'm playing with a smile on my face, I'm going out there, I'm leading the team.

"I think you could see a difference if I wasn't going out there and giving 100 per cent but every time I'm putting on the shirt - I've got the armband on at the moment - my only objective is to go out there and give everything for the club and get three points.

"I think we can achieve good things. Last season we finished two points off the Champions League and easily could have got into that. In the League Cup [this season], we knocked out Manchester United.

"The mentality around the place is that every competition we're entering is one we can go on and win for sure. We want to win it.

"You can see how happy I am on the pitch, I love playing for this team and this manager. Honestly, it's such a great place to be around at the moment. With the results and how well we're doing, it makes it that bit more special."