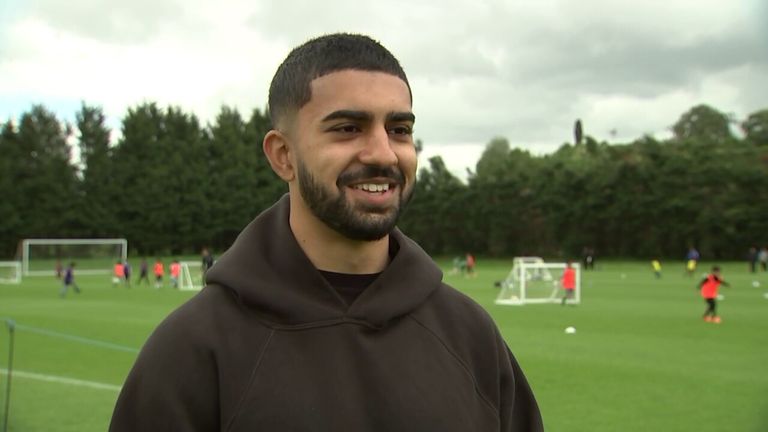 Dilan Markanday says he is desperate to progress and make a positive impression on everyone at Blackburn Rovers.

Blackburn attacking midfielder Dilan Markanday says he is desperate to show everyone what he is all about next term after the biggest rollercoaster season of his career.

Markanday, 20, made a historic appearance for Spurs in a Europa Conference League game away at Vitesse last season, becoming the first South Asian heritage player in Tottenham's history when he entered the pitch as a second-half substitute at The Gelredome.

However, the Barnet-born forward decided to prioritise first-team football, completing a January transfer to Blackburn - who have just appointed Danish legend Jon Dahl Tomasson as Tony Mowbray's successor - only to suffer a hamstring injury after an impressive Sky Bet Championship debut for Rovers against Hull.

But Markanday's dedication to his rehabilitation allowed him to make an earlier-than-expected recovery, and the Hindu-Punjabi forward made a 23-minute cameo for Rovers away at Birmingham City to end his season on a personal high.

Asked if he is targeting next season as a breakthrough campaign, Markanday told Sky Sports News: "That's what I want to happen, that's why I came to the club. Obviously, it didn't work out how I wanted it to at the beginning with the injury, but I feel like this season I can really push on and show the fans, the club and show young kids what I can do and inspire them.

"I've had some time away just to rest. Obviously, it has been a tough six months so mentally I needed a break just to wind things down. I definitely feel refreshed, my injury feels good and I just want to make an impression at the club, to the new manager and to the fans - hopefully, I can do that.

"I'm really enjoying it up here," added Markanday, who was speaking at a South Asian Talent ID initative hosted by Blackburn Rovers alongside the PFA.

"The people are really friendly so I've settled in really well to be fair."

Taylor: I'm going to play on

Neil Taylor wants to continue playing for the next couple of seasons following the expiry of his contract at Middlesbrough.

Taylor joined Boro for the remainder of last season after spending the previous three years at Aston Villa. The full-back, whose mother is Bengali, is among the most senior South Asian-heritage footballers in Britain.

Speaking at Arsenal's Hale End Academy, at an event to help boost academy representation and participation, Taylor told Sky Sports News: "I want to play on for one or two more years still.

"I couldn't tell you where, there is no exclusive, but I want to keep playing."

Ex-Swansea left-back Taylor started 17 matches for Boro in the second half of last season. He has featured in 43 matches for Wales and last played at international level in 2019.

According to The Sun, the 33-year-old has received an offer from Azerbaijani side FC Baku, with Turkish outfit Istanbul Basaksehir and Indian Super League teams East Bengal and ATK Mohun Bagan also interested in signing him.

Sky Sports News revealed last month that the 6ft 5in Punjabi shot-stopper was set to commit his future to Cardiff.

Luthra made history when Cardiff visited Reading in the Sky Bet Championship earlier this year when he became the first goalkeeper of South Asian heritage to take up a place on the bench in the top two divisions of English football.

The west Londoner went on to feature as a substitute in Cardiff's last six Championship matches.

Prior to joining Cardiff, Luthra spent 11 years at Crystal Palace where he made his debut for the club's U18s side at the age of just 15.

Luthra is a former pupil of Croydon's Whitgift School where he spent two years playing in the same team as Chelsea and England winger Callum Hudson-Odoi. The pair won back-to-back national Independent Schools Football Association Cups together, with Luthra keeping a clean sheet and Hudson-Odoi scoring a hat-trick in a 3-0 win in the 2014 final.

"Rohan is a quality player and he's still a baby as far as goalkeepers go. He's got so much more to learn, to give and to soak up like a sponge for the next 10 years for when you hit your quote, unquote, prime years as a goalkeeper at 27, 28, 29. That's the best part of being a goalkeeper, the longevity of your career.

"His success helps football connect with so many more South Asians, and he's going to help build that platform, which will hopefully lead to so many more following him in waves. It gives everyone from a South Asian background a proud feeling.

"It makes you proud to be doing what you do, whether it's grassroots in a park, an academy, or a development squad. Whatever age or whatever spectrum you are as a goalkeeper or an outfield player from a South Asian background, you're now going to look at Rohan as a prime example of perseverance and consistency.

"No matter where you come from or what you do, if you work hard enough, you could actually reach where he's reached. And like I said, it's just a start."