Crystal Palace want a change of direction to progressive, attacking football under a new boss focussed on bringing through young players and establishing an identity; Frank Lampard, Eddie Howe are among as many as six contenders

Crystal Palace have as many as six candidates currently under consideration to replace Roy Hodgson including the likes of Frank Lampard and Eddie Howe.

Ex-Chelsea and Derby boss Lampard and former Bournemouth manager Howe, both currently free agents, are high on the list at Selhurst Park after confirmation Hodgson will leave at the end of the season.

Swansea's Steve Cooper and Barnsley's Valerian Ismael - both currently battling it out in the Championship play-offs - are also among the contenders.

There are admirers of Scott Parker at the club too, and the job he has done at Fulham despite relegation from the Premier League this season.

Ex-Arsenal winger Freddie Ljungberg, who was in interim charge at the Emirates between Unai Emery and Mikel Arteta, has also been considered.

Palace have had a long-standing interest in Burnley boss Sean Dyche - but are now looking in a different direction, which also appears to distance them from the likes of Chris Wilder.

Sky Sports News has been told the club want their next manager to bring with them a new identity of progressive, attacking football and developing young talent from their successful academy.

It gained Category One status in July last year and has produced the likes of Tyrick Mitchell and Wilfried Zaha. Palace want more players to come through.

When they speak to candidates, they are expected to ask them to pitch their unique visions for the future of the Eagles.

Lampard has been widely reported to be the frontrunner but Sky Sports News has been told his appointment is not a foregone conclusion.

Howe, meanwhile, has held discussions with Celtic but he has not yet been announced as Neil Lennon's successor in Glasgow.

Parker has recently spoken of a need to discuss his future with the Fulham hierarchy ahead of their third mission to get back in the top flight in five years, wanting to "break the cycle" of promotion and immediate relegation.

Cooper and Ismael, who played for Palace 13 times in 1998, have got their Championship teams playing an attractive, winning brand of football but are relatively new to first-team management in England and yet to prove themselves in the top-flight.

Palace chairman Steve Parish, speaking exclusively to Sky Sports News, revealed that he was informed of Hodgson's decision to leave a few weeks ago and the club have since begun the search for his replacement.

"The only time we started putting feelers out (with regards to a new manager) was once Roy told me of his decision and that wasn't too long ago. It's been a few weeks, maybe more," he said.

"We've got some ideas. What is important is that the next manager merges with the club. On the one hand a lot of people want the job and that's great. On the other hand, however, we have to make sure they fit. Outside the clubs that are traditionally at the top, I think we are as attractive as a job as you can find. 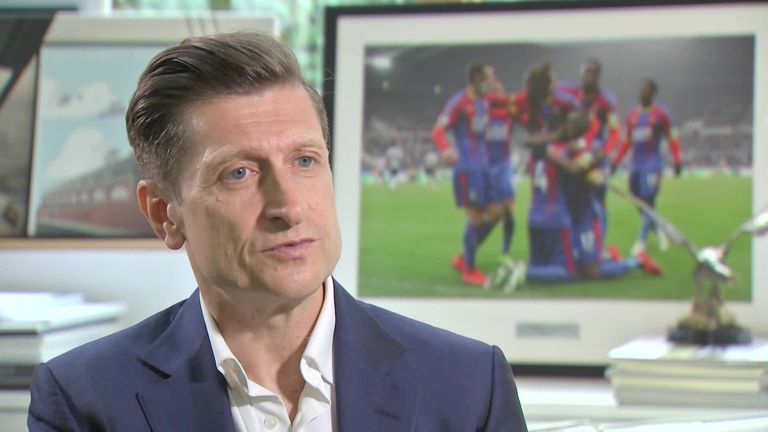 "We need to make sure we make the right choice so we can have as good as a relationship as we have had with Roy to build and grow the club with realistic expectations.

"We'll certainly give everyone due consideration and hopefully arrive at the right person for us now, where we are in our development."

The Eagles chairman admits the prospect of replacing the stability which Hodgson brought to Selhurst Park is daunting, but says he believes the club is in the best shape it could be in for the upcoming transition.

"I don't think we should underestimate the size of the challenge," he added. "We can see with teams that have been promoted already, we have a quality league next year but equally it is a fantastic opportunity for somebody.

"This is a London club and it is a exciting time to be around it, the academy is developing and the catchment area for talent we know is outstanding. The staff are amazing and we have now pursued plans for a new main stand with vigour through this difficult time.

"It's daunting but we have been through this before. We are in better shape than ever before as a club to make this transition, that isn't to say it doesn't come with pitfalls and dangers."

The next Crystal Palace boss is also likely to have new-look squad for next season with up to 12 senior players, including Christian Benteke, James McCarthy, Gary Cahill, Scott Dann and Joel Ward, all out of contract this summer.

Parish says talks have begun with a number of the players who the club want to retain while they aim to reduce the overall size of the playing squad, but also admitted that they will need to recruit in the summer transfer window.

He continued: "There are a few up in the air and we want to remove the uncertainty for them. It's a great headline 'Palace have 12 players out of contract'. First of all the squad is too big, bigger than we want it to be.

"Some of the players we are negotiating with and we want to get those across the line. And we need to sign some players as well because unfortunately there is a time when you need younger talent for energy and fresh faces.

"We have a plan, executing it is never and easy as we would like it to be. It's going to be a difficult market this summer. As we move through the summer their might be keener sellers, I'm expecting less movement.

"Some clubs can spend whatever happens, for most of us that is not the case. What are the right wages, what is the right price? It will be difficult for people to find the level, there will be some confusion."