Wilfried Zaha: Crystal Palace forward says he wouldn't turn down move to a top club in order to win trophies

Wilfried Zaha has two years remaining on his Crystal Palace contract but the forward has attracted interest from numerous European clubs over the last few seasons; Watch Liverpool vs Crystal Palace live on Sky Sports Main Event from 3.50pm on Sunday; kick-off 4pm

Wilfried Zaha admits he is open to a fresh challenge and would not turn down a move away from Crystal Palace in order to win trophies with a "top" club.

The 28-year-old came through the academy ranks at Palace and has been one of their most influential players during two stints at the club, but despite having two years remaining on his current deal at Selhurst Park, the forward was intent on departing his boyhood club last summer.

Zaha has regularly been linked with a move elsewhere. Paris Saint-Germain and AC Milan were reportedly interested in the Ivory Coast international in the January transfer window while last summer Borussia Dortmund and Monaco were also keen on signing him.

Palace set an £80m price for Zaha in 2019 but rejected bids from Arsenal and Everton which fell short of that valuation.

After three seasons in the Championship for the Eagles, he joined Manchester United back in 2013 but fell out of favour at Old Trafford, making just four appearances there, and returned to Palace on a permanent deal in 2015 where his career got back on track.

However, when asked about his future, Zaha said he would not rule out another departure from the south London side in order to boost ambitions of winning silverware with one of the "top teams".

Zaha told The Face: "I feel like I can have another shot at the top teams, because my dream is to win things.

​"I'm good enough to go out there and compete with the best.

"If the opportunity came, I wouldn't turn it down, because I feel like I deserve it. It's so I can show my kids: ​'This is what daddy won'." 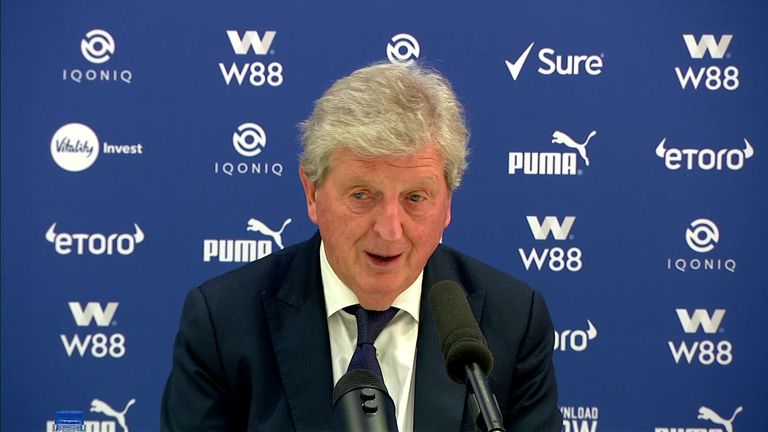 With one match remaining for Palace this season, against Liverpool on Sunday live on Sky Sports, outgoing manager Roy Hodgson looks to have guided his side to a mid-table finish.

Although Christian Benteke (10) and Eberechi Eze (four) have shared the goalscoring responsibilities in the Premier League this season, it has been suggested that Palace have been overly reliant on goals from Zaha over the last few years in order to avoid relegation.

But the forward, who has found the net 68 times in 392 appearances in all competitions for the club, says he just wants to continue to perform well.

"My dribbling is not even that high this season, but I've got 11 goals, so it's like I don't need to. The main thing is for me to be scoring goals regularly."

With Hodgson set to depart as manager following nearly four seasons at the helm, Palace have identified up to six candidates, including Frank Lampard and Eddie Howe, to become the 73-year-old's successor.