Minority of fans booed anti-racism gesture ahead of Brighton match last weekend; Mee: "I don't know how many times we need to reiterate as players the reasons why we are continuing to take the knee."

Burnley captain Ben Mee has criticised fans who booed when players took a knee ahead of Saturday's Premier League game against Brighton.

Mee thinks booing a gesture designed to signal opposition to racism is a poor look for those involved - but also pointed out that it was a minority of fans who participated. 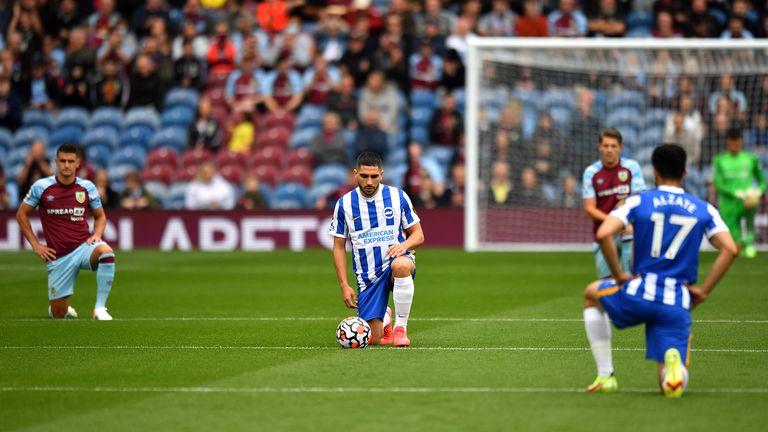 Burnley captain Ben Mee has called on fans to support the players' decision to take a knee, after a minority of supporters were heard booing in the game against Brighton

Premier League players started taking a knee before matches last summer and, ahead of the new season, announced that they would continue to do so, as 'a symbol of unity against all forms of racism'.

Fans at several grounds have booed the gesture, and after a small number of Burnley fans did likewise last weekend, Mee expressed his disappointment.

"I don't know how many times we need to reiterate as players the reasons why we are continuing to take the knee.

"It gets to a point where, if you are booing, it doesn't look good on those individuals does it?

"Continue to support us and support us in what we are trying to achieve as a group of players and a football community.

"We don't need to keep reiterating why we are doing it - and support would be more than welcome."

Mee has been a passionate supporter of taking a knee - and spoke out eloquently in June last season when a plane trailed the banner 'White Lives Matter Burnley' over the Etihad Stadium ahead of a game against Manchester City.

Speaking at the time, Mee said he was "ashamed and embarrassed" by the banner, which "doesn't represent what we're about".