Coventry City host Tranmere Rovers in League One fixture on Sunday, live on Sky Sports Football from 11.30am 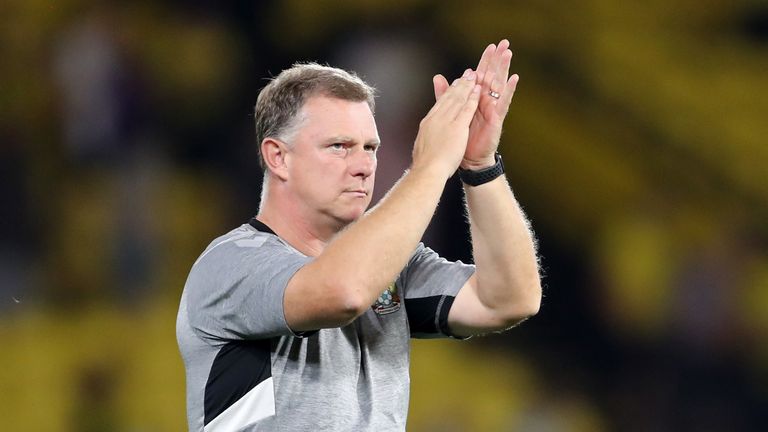 Coventry City have agreed a new contract with manager Mark Robins following Sunderland's approach to speak to him regarding their vacant manager's role.

Robins has guided Coventry to fifth place in Sky Bet League One after 11 games this season after gaining promotion via the play-offs in 2017/18.

The 49-year-old is in his second spell in charge of the Sky Blues and told Sky Sports News he is "fully committed" to the club despite Sunderland's interest.

Robins said: "It's been really quick. I was told of an approach from Sunderland on Wednesday afternoon.

"[On Thursday] the club had started negotiations on a contract and straightaway I said I didn't want to leave.

"I'm totally committed here. The work we've done over the last two-and-a-half or three years has been really good and I've got a real affinity and a real connection with this place, so it would take something special for me to move anywhere else."

Sunderland have been linked with various managers, including Wycombe's Gareth Ainsworth and Wigan's Paul Cook, since they sacked Jack Ross on Tuesday after less than 18 months at the club.

Despite being flattered by Sunderland's interest, Robins insists his goal is to try and guide Coventry back to the Championship.

He added: "Sunderland is a special club. It's a big club, but so is this and it's really close to my heart and the work that we're all doing, the challenges we've come through together.

"There's still a lot of challenges to get through, but I'm in the middle of a project that I'm really enjoying and I want to take this to its conclusion, as far as we possibly can do.

"The immediate aim is to try and get back into the Championship as quickly as we can. I'm glad it's all sorted and put to bed because there's big games coming up and the game on Sunday is just that."

Coventry's chief executive David Boddy is delighted to have kept Robins at the club, yet praised Sunderland for their manner during proceedings.

Boddy said: "We are delighted that Mark has agreed a new contract with Coventry City Football Club, as will all supporters be too.

"Interest from elsewhere is a compliment to the excellent job that Mark has done at this club, in spite of trying circumstances at times.

"That Mark has committed to this new contract shows his affection for the club and its supporters, and the dedication he has to continuing the great work he has started here.

"I would also like to thank Sunderland for the respectful way that they have approached the matter, which is refreshing."

Coventry will host Tranmere Rovers in League One fixture at St Andrew's on Sunday, live on Sky Sports Football from 11.30am.