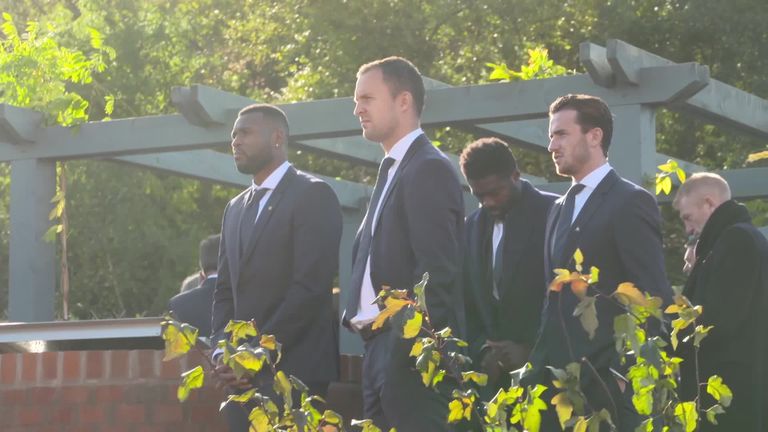 A memorial garden honouring the five victims of last year's King Power Stadium helicopter crash in Leicester has been officially unveiled to mark the first anniversary of the tragedy.

The Vichai Srivaddhanaprabha Memorial Garden, built on the accident site as a lasting tribute to the victims, was opened alongside a private multi-faith ceremony held for family, friends and squad members.

The Leicester City owner died alongside staff members Kaveporn Punpare and Nusara Suknamai, pilot Eric Swaffer and crew member Izabela Lechowicz when the helicopter came down near the stadium shortly after taking off from the pitch.

The memorial garden will be open to the public from 2pm until 5pm and during daylight hours thereafter, and is designed to be a peaceful space that will protect the scene of the accident and provide a lasting memorial.

"All he ever asked from us was to fight, that was the only thing he ever said – keep fighting right until the end, whatever the result will be, it will be." - @kschmeichel1

How Leicester are moving on from Vichai tragedy

The Air Accidents Investigation Branch (AAIB) is expected to publish a final report into the crash next year.

"Our thoughts are with all those affected by this tragedy.

"During the course of the investigation, the AAIB has been working closely with the helicopter manufacturer, other specialist organisations and regulators to identify the cause of the accident and any contributory factors.

"We have published two special bulletins. The first highlighted the initial facts identified in the early stages of the investigation and the second identified that the accident was caused by the failure of the duplex bearing in the helicopter's yaw control system."

Mr Orr added: "All parties involved in the investigation continue to work to fully understand what initiated the failure of the duplex bearing and to develop any additional safety actions."