Monday marks a year since the last time a Premier League game was played in front of a full stadium; Paul Barber told Sky Sports News: "It's probably cost us in excess of £25m to be without fans for the year"

Brighton chief executive Paul Barber says the impact of not having fans at the Amex for the last year has cost the club £25m in revenue.

It is exactly 12 months since the last top-flight game was played in front of a full stadium, with clubs across the pyramid counting the significant financial damage of playing in empty stadiums during lockdown.

Barber said Brighton are considering ways to generate money, including hosting events at the Amex in the summer, but for now remain "grateful" they have been able to keep playing football during lockdown.

"It's probably cost us in excess of £25m to be without fans for the year," Barber told Sky Sports News.

"It's been a tough year, but it has been for everybody. We've been grateful, however, that we've been able to carry on playing. We completed last season and hope to complete this one too. 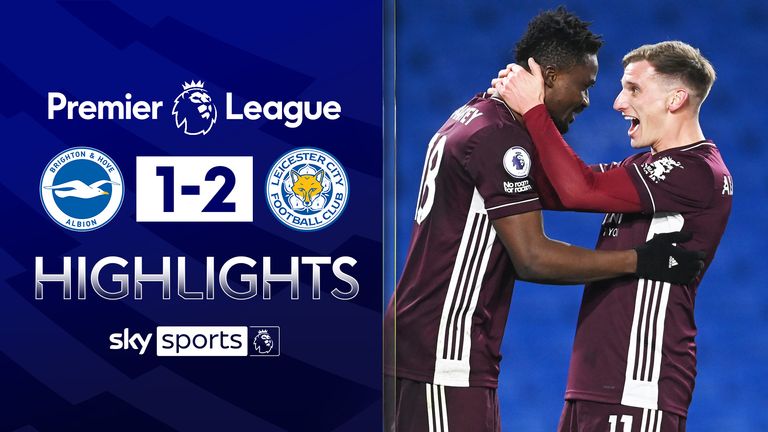 "Hopefully we've now got a little bit of light at the end of the tunnel and hopefully fans will come back to watch matches again in good numbers as soon as we can."

Brighton have not cut any jobs during the pandemic, and while Barber says that remains their plan, he added it could be important to find new ways to create revenue for when games aren't being played.

"One of the challenges that we have in football is that stadiums like this are only used 20 or 25 times a year," he said.

"The balance is always protecting the quality of this playing surface. I think our ground staff would rather we didn't play football on it sometimes, it's that precious!

"Getting the balance between having time to care for the pitch and maintain the pitch during that summer period - but also bringing in events that can actually generate income, that can offset some of the losses - is always going to be something that we have to battle with, and a balance that we have to strike."

Brighton are right in a relegation scrap, currently in 16th but level on points with Fulham who are in the drop zone. Barber says he is not planning for life in the Championship but has backed the club to bounce back from the double hit of the pandemic and relegation if it were to happen.

"If the worst was to happen, we're a resilient club," he said. "We're a well-organised club, we've got good people, we've got a great owner who's supported us for long periods outside the Premier League.

"So if the worst were to happen we would work as hard as we possibly could to bounce back, but at the moment there's a lot of points to play for and we're very confident about doing the job that we've done for the last three seasons and hopefully now this fourth season as well.

"We've got a head coach that has transformed the playing style here. We've got great staff working with him, we've got a great infrastructure and we've got to remain calm and focused on doing what we can do."

"There's going to be potentially some adjustment, but there will always be that demand for the best players. I doubt that's ever going to change."

He says the day fans are allowed back into a full stadium will be an "emotional" moment for the crowd as well as those who work for the football clubs.

"There now is a significant pent-up demand for fans that want to come back and see live sport again, particularly now that the vaccinations are working their way through to the younger population as well as the older population," he said.

"People now are keen to return to a relatively normal way of life as quickly as they can, and in this country, sport - and in particular football at the top level - is a very big part of people's lives.

"To see the vibrancy of 30,000 people back here; the colours, the visiting supporters, the noise, the atmosphere, the smells - all the things that we love about our national sport - I think it will be an emotional occasion not just for staff at football clubs, but for many fans as well." Brighton have banned a season ticket holder for two seasons for posting an offensive tweet aimed at another club.

The Premier League club have taken action after an "offensive and inappropriate social media post" was highlighted by Brighton fans and other supporters.

Chief executive and deputy chairman Paul Barber said: "We have made clear our zero-tolerance policy many times over, and there is no excuse for abusive and offensive comments being posted online.

"We expect all our supporters to adhere to some basic levels of respect, as the vast majority do, but those who choose not to will be faced with sanctions such as these, and, where appropriate, criminal charges and prosecution.

"In this instance, we thank those of our supporters who highlighted the posting to the club.

"As a result, the individual concerned has had their season ticket cancelled and a two-year ban imposed.

"We have stopped short of naming the individual or highlighting the post and we would request others to do the same as we do not wish to further highlight the behaviour or cause additional offence."

The Football Association has called on social media platforms to introduce identification in a bid to deter online hate.

The FA says it is putting more pressure on companies, including Twitter and Instagram, to do more to combat abuse.

"I do think there should be some way in which users are identified," Mark Bullingham, the FA's chief executive, told Sky Sports News.

"At the moment, they are able to completely avoid any personal responsibility and we think that they have to face up for what they're doing, in a small number of cases, on social media."