Watch QPR vs Brentford live on Sky Sports Football from 7.30pm on Monday; Kick-off is at 7.45pm.

When Pontus Jansson joined Brentford from Leeds in early July, there was widespread shock in the EFL and beyond.

A mainstay of Marcelo Bielsa's defence as the club reached the Championship play-offs last season, the Swede was named as the club's best player by his manager and Premier League interest was duly expected as he entered the final year of his contract at Elland Road. 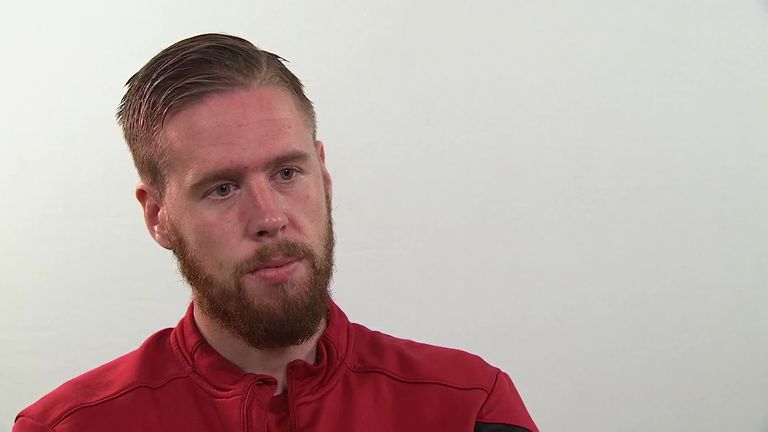 Pontus Jansson said he is aiming for promotion with Brentford and hopes to banish the demons of the play-off defeat with Leeds last season.

But as pre-season got underway, his tenure in West Yorkshire came to an abrupt halt. Rumours of a rift between Jansson and Bielsa surfaced, with the Bees rapidly progressing through negotiations in order to secure his services for a reported cut-price figure of £5.5m.

"It happened quite quickly with Leeds and the decision that they wanted to sell me and I just told my agent to find something in England," he told Sky Sports.

"We had quite a few clubs [interested], some in the Premier League, some in the Championship. The contact from Brentford was quite serious, directly from the first point. I spoke to the sporting directors and to the coach and after talking to them, I was quite sold. I always rated Brentford in a high position in this league."

Griffin Park was, of course, a surprise destination. The rousing rendition of 'Hey Jude' belted out by fans on the Ealing Road terrace is a far cry from the deafening roar of 'Marching on Together' he left behind, but for the 28-year-old there was the attraction of added responsibility.

"He [Brentford boss Thomas Frank] gave me a lot of responsibility from the start - he made me the captain," he continues.

"He gave me a lot of responsibility in a new chapter in my life, to be one of the leaders, one of the more experienced players in the team, to take care of the younger players, to both win games but also to develop them and help them to take bigger steps in their careers. It's something new for me.

"I always said, earlier in my career, that I didn't need the armband on my arm to be a captain, to be a leader, but of course it makes it a little bit more special. You can't be that quiet person and if you do something bad, you still have to take responsibility and be loud and talk and help your team-mates.

"That's something that's maybe not always the easiest thing when you made a bad mistake in the game and then you have to stand up and tell the other players to play better when you are the problem. But that's how it is.

"I think I'm a loud person. It comes from me naturally to talk, especially in this quiet team. It's one of the most quiet teams I've played in. It feels sometimes that I talk for 10 people on the pitch. But for me it comes natural and when I feel that it helps, it makes me much easier to deal with. It's actually quite funny how quiet this team is and that's why it's important for me to talk even more."

Fortunately, little seems to have gone wrong so far. In defence, at least. Heading into Monday's game against west London rivals QPR, the Bees have conceded just 11 goals from their opening 13 games, among the fewest in the Championship this season. For context, at this point last season, they had already shipped 15.

His performances have been lauded by Brentford fans, yet the defender claims that's an aspect of his game he, surprisingly, no longer closely monitors.

He said: "To work with Bielsa for one year gave me a lot of headaches also because of long days, a lot of meetings and a lot of things to take in. But it helped me so much, not only as a player, but also as a person how to be a professional footballer, how to eat, how to behave, how to sleep, all those things to recover well.

"I came here with expectations [of me], but I like that. It made me more concentrated. Now I'm getting older, I don't care that much about my performance anymore - if the team play good, it's more likely that I'm also going to play good. I think that's come with age.

An ill-timed injury kept him out of Leeds' play-off semi-final first leg win over Derby earlier this year, with the defender forced to watch from the bench as an unused substitute as his team-mates lost the thrilling return leg at Elland Road. This season, he's determined to banish the negative energy those memories stir.

"Obviously how it ended last year that I was injured in the two most important games, the play-off semi-finals, and then we lost," he added. "For me that was a dark moment of my career. I had a dream to take Leeds to the Premier League and when I couldn't play it felt so bad.

"So now when I came here, I said to Rasmus (Ankersen) the sporting director, the first time I spoke to him, that we have to aim high. I know it's a young squad and it's a smaller club, but still we have to aim high. There's no meaning of aiming for top six, when you can aim for top two. And if you aim for top two, there's a bigger chance that you are going to be top six.

"There's no meaning for us to talk about it to other people, to the fans, to the media. We can be quiet, work and take it game-by-game and then hopefully when it comes to April/May we're going to be in the top six."

He is hoping the quest to climb the table continues on Monday night, with Brentford looking for a third win in succession, having seen off Millwall and Swansea in their previous two outings.

"Performances have been good and results could be better but this club, how they work with underlying numbers, expected goals and things, they are so calm because if you look at those numbers, we're going to be in a higher position," Jansson said.

"I think that also makes it easier for Thomas and the people around the club to just keep on doing the same things for us players, so that we can work in a less chaotic situation. We wanted more points and we want to be higher, but we are close to the play-offs.

"It's a derby and that was one of my first questions when I came to the club: Who is the biggest rival? Directly, they said QPR and Fulham, especially QPR. It will be a good game; derbies are always special for footballers. They mean a lot for us players, but even more for fans and people around the club who know the history."