Thomas Frank confident Brentford will be back on the promotion march 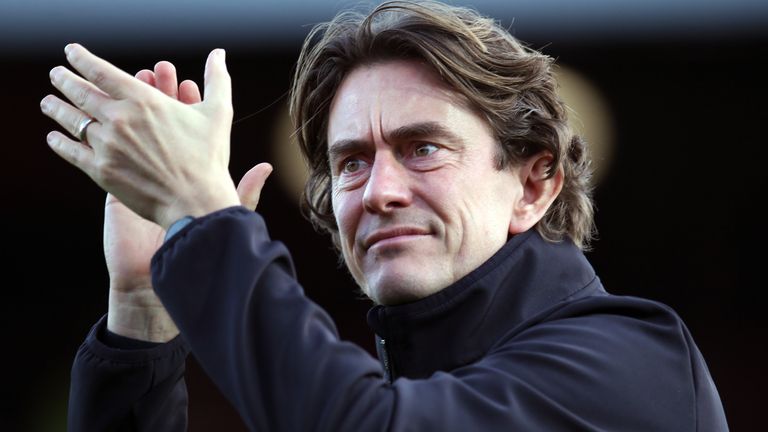 Brentford boss Thomas Frank is confident his team will be ready to resume their push for Premier League promotion if and when the season resumes.

The Bees were having arguably their best season in the Championship before football was suspended due to the coronavirus outbreak, sitting fourth on the back of a 5-0 win over Sheffield Wednesday.

After a period of adjustment to lockdowns and no training, Frank is hoping to ensure their momentum has suffered the minimal amount of impact and they are ready to go again as soon as it is safe to resume the campaign.

"I'm confident that when we come back we will be up and running pretty quickly," Frank told Sky Sports News in an exclusive interview from his home via Skype.

"I hope that because we have the same group of players and were in a good place, and finished the last game 5-0, the last impression is to keep that feeling in the mind and body.

"It's a split feeling. There was one season four or five weeks ago. Now there is another season, it's the same season, but it's another set of circumstances. We need to do the best we can to prepare for it without any specific dates or plan.

"The players are in an okay place. They get a programme so they can stay fit. We know we can't train until May 16, so they have an off-season or annual leave programme, and are staying in minimum fitness. They can't continue the same because they have been through nine or 10 months and we don't know when we can start again.

"This four or five weeks, where we have had a little downtime … has been (about) finding out what this is and when can we start, and we found out it's going to be a longer time. So now I have started to plan what are we going to do; if we are going to have two, three or four weeks training (before games).

"We are trying to cover all scenarios, so that when they say we can start it's 'okay now we are ready'."

Brentford's players were the first across the leagues to agree to a deferral of a portion of their wages, to help the club remain stable and ensure its financial future, and Frank believes the club's structure has given it a robustness to cope with the pandemic's economic impact.

"I don't know the exact finances of all of the clubs," he said. "(But) I have a good idea of our finances, although it's not my main area, but I speak to the guys involved. I guess we are in an okay situation and I hope that maybe we can continue for more months (without football).

"I just hope that all clubs are coming through this in the best possible way. It is sad every day when you read café and restaurants have to close. So mainly I just hope all clubs come through this - I don't think it will be in an okay way - but they survive."