In an exclusive interview with Sky Sports, Cambridge head coach Mark Bonner discusses taking over from Colin Calderwood at the Abbey Stadium, his 'fast track' route to becoming a head coach and transforming United's fortunes in front of goal.

It is easy to let the mind wander with thoughts of Eddie Howe overseeing Bournemouth's transformation and meteoric rise through the pyramid, or even Pep Guardiola's four-year, trophy-laden spell that made him the most decorated manager in Barcelona's history.

"We're very ambitious here as to where we want to take our club," September's Sky Bet League Two Manager of the Month told Sky Sports.

"From my perspective, I think you learn from the people you work with and stay in touch with those people because they can help you learn and improve. That's as important as everything we are trying to put in place here. My inspirations are probably closer to home, not thinking too far ahead about what comes in the future."

He probably couldn't have foreseen what was would follow a decade after returning to the Abbey Stadium for a second spell in 2011, either.

Having worked with the club's U18s and as academy manager, Bonner was named first-team coach in January 2018 and, a month later, stepped up to become assistant to Joe Dunne after Shaun Derry's departure, in an initial interim role that was made permanent at the end of the 2017/18 season.

When Dunne was relieved of his duties just four months into the new campaign, Bonner took charge of two first-team games prior to the appointment of Colin Calderwood and was then temporarily put in charge in January 2020 when the former Scottish international was sacked, presiding over four wins in seven games prior to lockdown.

There's been barely a moment to breathe. "We have always recognised Mark's great potential as a coach and it is why we fast tracked him from the academy into the first team set up," said owner Paul Barry when Bonner's two-year deal was announced in March.

"It's always a shame and a disappointment when somebody leaves the club, particularly someone I was working so closely with in Colin," said Bonner. "I had to take on that opportunity of taking the team and then it became clear that I wanted to put myself forward for the job, so I was delighted when the club gave me the opportunity to take the task on.

"Developing as a coach and being around the first team, helping the integration of young players through the academy and first team squad was certainly the plan because we want to try and develop young players at the club and that's one of the strands we try and add.

"My involvement in that was always the key. Whether or not I was ever pushing for this position, I'm not so sure, but in my head, it was something I wanted to do in the future. It definitely came round quicker than I thought it would.

"But I think sometimes, when you get given an opportunity, you have to learn on the job and grab it with both hands. That's what I've done so far and that's what I'm planning on doing because, as early as it is, we've not really achieved anything yet. We've got to be able to show that as a club we can maintain consistency.

"From my own standpoint, I'm fighting to learn, stay in a job and have some longevity, along with so many really experienced managers in the league. Somebody like myself has got to learn from all of those and try and stay in the game and the position for as long as I can. I'm delighted to be leading the club."

It's difficult not to get excited about what might be possible on the basis of the opening month of the season.

Eight goals scored, three clean sheets and seven points from the first three league games put the U's top of the table at one point, while they sit top of their EFL Trophy group and nicked a 1-0 win over Championship side Birmingham in the Carabao Cup first round, to boot. 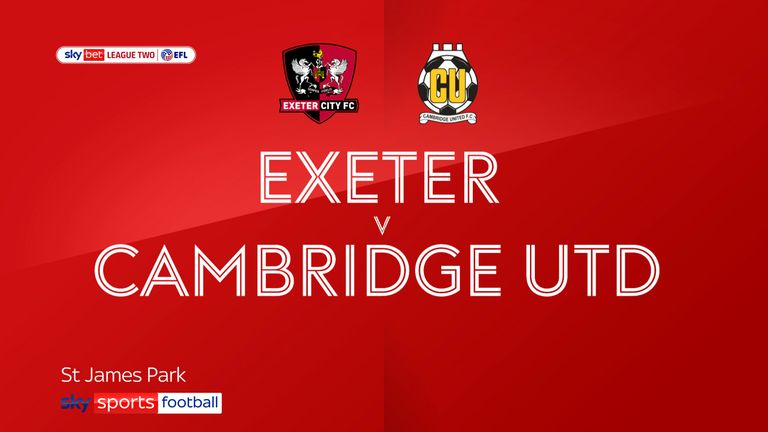 Highlights of the Sky Bet League Two match between Exeter and Cambridge.

Perhaps most improved, though, has been Cambridge's potency in front of goal. They have registered just league 40 goals in each of the last two campaigns and an average of just 45.3 over the past three, yet their tally of 10 so far represents a staggering 25 per cent of last season's return, with 41 games still to play.

"We've got work to do to keep building that attacking threat, making sure we carry a threat and looking as though we can be a high scoring team. The first couple of games of the season were really profitable for us in terms of goals scored but that's been a part of our plan throughout the summer. It's probably too early to judge if that's been successful but we've got to maintain over a longer period whether we've done that job well or not.

"I've been really pleased with how the players have bought into how we are working and the way in which we're trying to play. We're trying to add variety to our game as much as we can and in trying to add things, we don't want to take away from what we've already got.

"It's a continuation of the back end of last season where we found a good run of results and the defensive solidity we had in September was very strong for us. To see the players take things on and learn and develop together as a team has been really exciting.

"It's very early days and we have to maintain that and work towards being as competitive as we were in September in a month where we've got six, seven or eight games."

With a hungry young coach at the helm, Cambridge could be in for an exciting ride over the next seven months.