Rangers boss: "Everyone has been backed into a corner to give that vote" 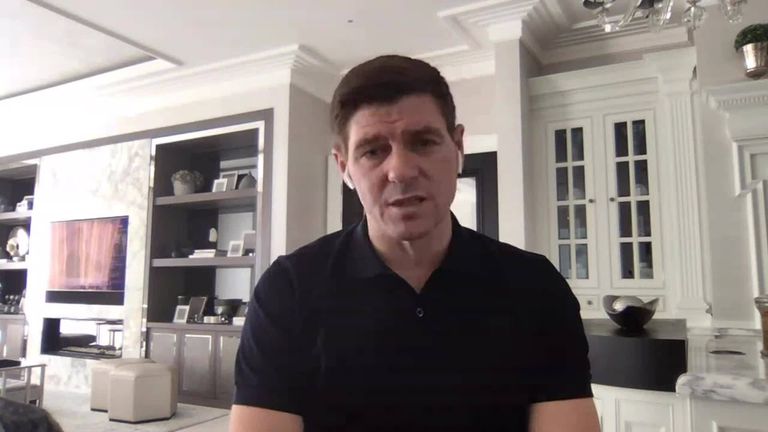 Rangers manager Steven Gerrard has called for an independent investigation into the way the SPFL is run, following the controversial vote to end the season with immediate effect for all leagues below the Scottish Premiership.

Steven Gerrard has branded the SPFL's handling of an end-of-season proposal as "an absolute mess" and called for an independent investigation into the governing body.

The Rangers manager was speaking to Sky Sports' The Football Show after Championship club Dundee ended up with a deciding vote on the resolution to end the Scottish Championship, League One and League Two seasons.

After their original electronic vote did not reach the SPFL - and having originally intended to vote against the proposal - Dundee voted in favour, meaning the resolution has passed.

"I've been watching closely from back home and it does seem a bit of a mess at the moment," said Gerrard.

"I think Rangers' stance on it, and certainly my stance on it, is I'll let the suits carry on doing what they're doing, I think that's their job to continue to represent Rangers in that way.

"But from afar, the SPFL looks an absolute mess, in all honesty. I'm watching ex-players, pundits and reading media and it's getting absolutely battered from pillar to post for the way it's handled things, certainly in the last couple of days.

"From my point of view, all I ask is for the main leader of the SPFL [Murdoch MacLennan] to show some real leadership in this time, and I think what he has to do now, because there are so many accusations and doubts and questions about this institution, he needs to allow an independent investigation in the set-up, to prove everyone wrong and make sure there is fairness, and transparency across the board in Scotland.

"There are so many doubts now, certainly looking in over the last few days, it's so confusing there at the moment.

Gerrard: Not really a fair vote

Gerrard explained his issue was not over how the vote was conducted but the position clubs were put in by the resolution - and how many clubs' need for end-of-season financial payments may have influenced their vote.

"I don't think anyone has got any problems with how the SPFL have gone about it in terms of the vote, it's because everyone feels that everyone has been backed into a corner to give that vote," said Gerrard.

"Basically they're saying no money can be given out until you make that vote. So if you're a team in the middle of the league and you're safe from relegation and you're not involved in promotion or play-offs, or to win anything, you're bound to vote 'yes' because you want your money straight away and you might be in financial difficulties.

"So that's not really a fair vote. That's the reason why they've managed to get 81 per cent of the votes.

"If they do end up doing [something similar in] England, the resolution Rangers suggested and a few other clubs backed was, can't they give a certain amount of the money out, so all the worries about financial situations are taken out of the equation and then you can actually give a fair vote across the board."

After the vote, SPFL chairman Murdoch MacLennan addressed the reasons behind the timing of the vote. He said: "It is no exaggeration to say that this was an existential matter for Scottish clubs, with many of them telling us they were at real risk of going under unless the situation was resolved very quickly, so I'm pleased that the game has moved decisively.

"Whilst more than 80 per cent of clubs agreed with the directors' written resolution, it's clear that others were strongly opposed.

"There has been talk of voiding the season, making emergency loans and so on, but what has been agreed today is not just the best way forward, it was the only realistic way forward."

Gerrard also told Sky Sports his preference was for the 2019/20 season to be finished at some point in the future - but stressed the priority right now was the health and safety of everyone.

"I think first and foremost, I certainly understand the situation we're in, I think there are more important things to be focused on right now," he said. "Our own personal families, our supporters and the health of everyone is obviously the most important thing right now.

"Ideally, of course, I'd like to see everyone back playing and to finish the season off. But where we are right now, the main priority is everyone's health and football is secondary."