Yosuke Ideguchi: Celtic is 'second chance' to prove my quality

Yosuke Ideguchi is one of three new Japanese signings at Celtic; Daizen Maeda and Rio Hatate have also joined in January; the 25-year-old had a failed spell at Leeds United; his first game could be against Hibernian on January 17 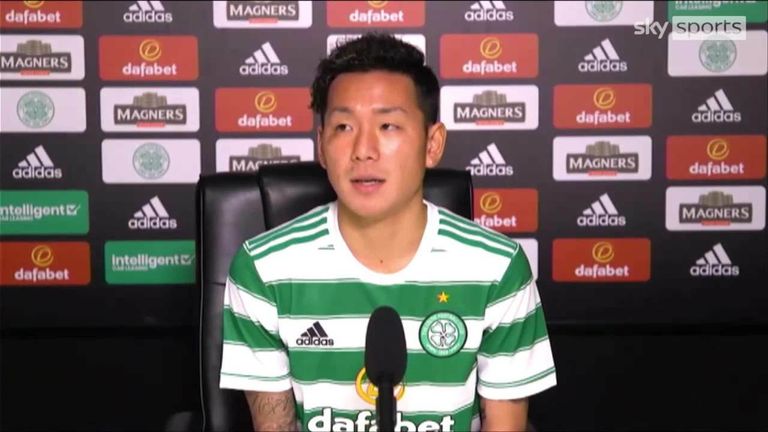 Yosuke Ideguchi believes Celtic is his "second chance" to prove he has the quality to play in Europe after failed spells in England, Spain and Germany.

The 25-year-old joined Celtic at the beginning of January on a four-and-half-year deal from Japanese club Gamba Osaka.

He is one of three new players from Japan's J-League, with Diazen Maeda and Rio Hatate also moving to Glasgow.

Ideguchi moved to Leeds United in 2018 but spent most of his contract on loan with Spanish feeder club Cultural Leonesa and German side Greuther Furth. Now he sees Celtic as a chance to prove himself outside Asia.

"First time I went abroad as a football player I didn't get the result I wanted," he said.

"I always wanted to try again, so Celtic have given me a second chance which is why I 100 per cent wanted to join.

"In terms of Leeds I was only there for the training camp and then I went on loan to clubs in Spain and Germany. Probably the reason I wasn't a success was because I felt I couldn't give my all, I couldn't put all my energy into it."

The midfielder, who is known as Guchi, believes he has found the right club in Celtic and he can be a success.

"Of course, I see this as a chance to prove myself, but that all depends on good communication with team-mates and staff.

"My style is pretty much hard-working, getting the ball and leading to attacking. I would love for everyone to watch my style."

Daizen Maeda jumped at the chance to link up with his former Yokohama F. Marinos manager Ange Postecoglou again at Celtic.

The striker, who was joint top scorer in the J-League last season with 23 goals, has joined on an initial loan with a compulsory purchase clause included.

"I have worked with the manager before so the training styles are similar," he said.

"I really admire his strong views and opinions. He's the kind of manager you want to follow and do your best for."

The 24-year-old could partner fellow Japanese forward Kyogo Furuhashi up front as Celtic look to reclaim the Scottish Premiership title from Rangers.

"Both of us have similar speed and style of play, so I'm thinking about how we can apply pressure to our opponents when it comes to attacking," Maeda said.

"I'm really looking forward to playing with Kyogo but also with the rest of my team-mates."

Celtic return to action after the winter break against Hibernian on January 17. They are currently six points behind Rangers in the title race.